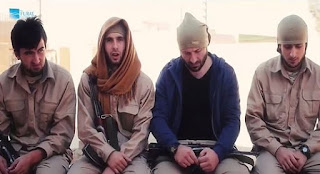 By George Tsereteli
On November 29, authorities in Tbilisi, Georgia, arrested four people accused of being connected to the Islamic State (IS) organization. Weapons, explosive devices, IS flags, and Islamist literature on CDs and DVDs were found in the suspects’ apartments (Civil Georgia, December 1). The Georgian State Security Service announced an investigation into whether other individuals are involved in IS-related activities on Georgian soil. Interestingly, the four individuals were from the Guria region, and not from the Pankisi gorge, which has in the past been a source of Islamic extremism (Interpressnews, December 1). The suspects denied the charges against them, although two of them had allegedly appeared in a Georgian-language IS propaganda video released on November 23. In this video, they call on Georgian Muslims to join the “Islamic Caliphate” and issue threats against “Georgia’s infidels” (The Clarion Project, November 25). The video also mentions that Georgia has been fighting against Muslims in Afghanistan and Iraq, conflicts in which Georgia contributed significant troop numbers to coalition military efforts. The release of the propaganda video suggests that the Islamic State’s ideology has now spread, at least in some small part, to Georgia’s capital city.
In an interview that aired on December 7, regional expert Mamuka Areshidze contended  that various organizations—which are either affiliated with the Islamic State or wish to be—are working to build an ideological base and foundation in Georgia and thereby gain influence. Those who fall under this influence are taught Salafi-jihadist ideology and are radicalized from a young age (Maestro, December 7). This is the case not only in the Pankisi gorge, but other regions such as Adjaria and Guria, where there are sizeable Muslim populations, and even in Tbilisi. Areshidze went on to explain that according to IS ideology, Georgia is located within the self-declared Caliphate’s territory; thus, when the group decides to move into the region, it will want a loyal segment of the population already in place, ready to welcome it.
However, not everyone believes that the Islamic State poses a serious threat to Georgia at this time. A few days after the November 13 attacks on Paris, the deputy head of Georgia’s State Security Service, Levan Izoria, stated that Georgia is not among the countries with a high risk of terrorist attacks, since it is not involved in the anti-IS air strikes carried out by the United States and its coalition allies (Civil Georgia, November 17). Defense Minister Tina Khidasheli echoed this sentiment when she announced that although additional safety and confidence measures would be taken, such as heightened security at airports and along the border, this would be done as a precaution and not in response to any immediate threat (Civil Georgia, November 18).
One must remember, however, that the Islamic State’s ideology and actions are not driven solely by recent or contemporary developments; indeed, the argument that Georgia falls within the so-called “Caliphate’s” territory is based on a historical precedent dating back to the ninth century. Therefore, the fact that Georgia is not involved in international coalition airstrikes against the IS in Syria and Iraq does not preclude the possibility of future terrorist attacks on Georgian soil by this extremist militant group.

Georgia is most likely not high on the current list of priority targets for the Islamic State. And yet, the above-mentioned recent arrests, the appearance of the Georgian-language propaganda video, as well as the presence of IS recruiters in the Pankisi gorge (see Jamestown Blog, June 22) indicate that a mobilization of Georgia’s defense, security and information channels may in fact be necessary.

The War in Ukraine and the Growing Risk of Russia’s... END_OF_DOCUMENT_TOKEN_TO_BE_REPLACED

On September 11, Jamestown Foundation Senior Fellow Janusz Bugajski was interviewed by the Polish Naval War Academy regarding his book, Failed State: A Guide to Russia’s... END_OF_DOCUMENT_TOKEN_TO_BE_REPLACED

By Richard Weitz Available for Free Download at the Bottom of the Page Chinese policymakers have conflicting sentiments regarding the planned military withdrawal of the United States and its allies from Afghanistan. PRC officials have expressed their commitment to collaborate with the international community to promote political stability, social progress and... END_OF_DOCUMENT_TOKEN_TO_BE_REPLACED