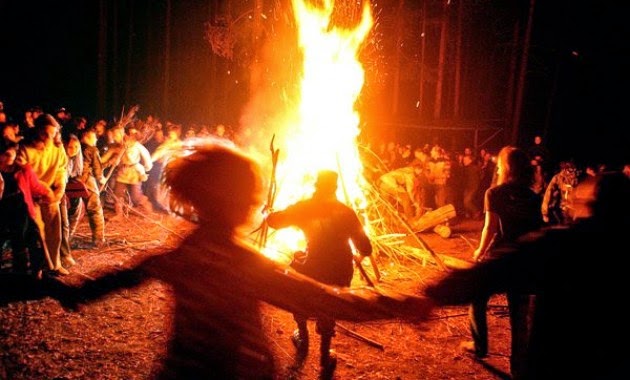 By Paul Goble
The spread of neo-paganist cults  is the latest problem to affect the “neo-Cossacks,” as those who have come to identify as Cossacks over the past two decades are known even though they have little or no relationship to the historical Cossack hosts of pre-1917 Russia. Indeed, this rise in neo-paganist beliefs among the neo-Cossacks calls attention to something traditional Cossacks, both in the Russian Federation and abroad, have long complained out: Those declaring themselves to be Cossacks are doing so less out of a belief in Cossack values than because it has become fashionable or because Cossack units, in some cases, provide a cover for political activity.
In an extensive article in Kavpolit.com, Nikolay Kucherov says that few people associated the neo-Cossacks with the neo-pagans or felt that the latter were much of a problem in Cossack circles until a series of events in Stavropol krai showed how shortsighted such a view was. Not only were neo-Cossacks who had been recruited to neo-pagan sects threatening Cossack leaders with Internet campaigns and attacking the Russian Orthodox Church, but some of them were actively promoting pro-Ukrainian views, up to and including the proposed inclusion of parts of the north Caucasus within Ukraine. Given the extreme sensitivity of any such talk, the journalist says, that has prompted officials and prosecutors to consider the matter more closely (Kavpolit.com, February 16).
Kucherov cites the controversial anti-sect specialist Aleksandr Dvorkin’s argument that “in present-day Russia, neo-pagan nativist sects are appearing like mushrooms” and “despite the comparatively small size of each nativist sect, taken as a whole, they represent a significant phenomenon of post-Soviet religious life.” These neo-paganist groups have penetrated many institutions, including the neo-Cossacks, Dvorkin alleges.
Many people view an interest in such sects as “innocent fun,” and as a result, the sects have often been able to expand without opposition. Nativist cults, Kucherov says, have enjoyed particular success “among the Slavic population of the North Caucasus and particularly in Stavropol.” This is because one of the leaders of these cults, Aleksandr Asov, claims that it was in the Caucasus where “the first Russian state—Ruskolan—first existed,” thus able to gain converts by invoking local pride.
Such sects have been attracting ever more members in recent years, Kucherov says. And it is a matter of extreme concern because “paganism has become not only a religious but quite an influential social-political movement in Stavropol,” simultaneously offending Orthodox believers and compelling prosecutors to look into what is going on.
Orthodox hierarchs have attacked the neo-pagans for many years. Last November, for example, Patriarch Kirill condemned “attempts at the construction of a pseudo-Russian neo-pagan faith” (Interfax, November 11, 2014). And this year, bishops in the North Caucasus called for putting neo-paganism in the same category as Wahhabism and Nazism. But despite that, the groups have continued to grow and to challenge the authorities and Cossack leaders (Kavpolit.com, February 16).
This pattern might have continued for some time, Kucherov says, had it not been for one thing: Some of the neo-Cossack neo-pagans began to promote the idea of “unity of the south of Russia with Ukraine,” rather than the more approved notion of the unity of south Ukraine with Russia.  That led one Cossack group to vote 357 to 43 to expel those holding such views from its ranks, and it has prompted prosecutors to consider bringing charges against them.
At least three things are interesting about all this: First, the neo-Cossacks may be an important syncretic element in Russia, combining a variety of notions and not just the simple replicators of traditional Cossack values as many, including the Russian government, have long assumed.
Second, instead of being the bulwark of Russian statehood that Vladimir Putin has proclaimed them to be, the Cossacks may be, at least in some places, a threat to the territorial integrity of the country, a conclusion that could lead to a new round of repressions against Cossacks as such.

And third, Kucherov’s article has all the features of one about a phenomenon of which the facts he reports are only the tip of the iceberg.  The relationship of the neo-Cossacks and the neo-pagans appears certain to expand, at least in the near term, and more or less regardless of what Cossack elders or Russian government officials do.

Back
Nemtsov’s March and the Russian Opposi..Next
Kyrgyzstan: Another Central Asian State ..

The Jamestown Foundation is pleased to host the webinar, “The... END_OF_DOCUMENT_TOKEN_TO_BE_REPLACED

The October 2015 issue of Militant Leadership Monitor covers several militants connected with the ongoing conflict in Syria and Iraq. Nicholas Heras begins with a brief on Shaykh Auws al-Khafaji and Shaykh Ammar al-Lami, the Secretary General and primary adjutant, respectively, of an Iraqi Shi’a group that fights on behalf of the Syrian regime. Muhammad... END_OF_DOCUMENT_TOKEN_TO_BE_REPLACED