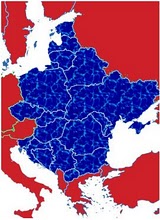 By Paul Goble
Since the time of Marshal Józef Piłsudski, Polish foreign policy thinkers have periodically sought the creation of an alliance of states in between Germany and Russia—from Estonia (and perhaps even Finland and Scandinavia) in the north, to Ukraine (and potentially down to the Balkans) in the south—as a way of promoting Poland’s interests and security. But except in times of heightened East-West tension (such as during the August 2008 Russian-Georgian war), Warsaw has had little success in creating what some might call a buffer zone or cordon sanitaire, but which the Poles and their supporters have always labeled the “Intermarium” (“Międzymorze”) or “land between the seas” (for detailed background on this idea, see Marek Jan Chodakiewicz, Intermarium: The Land between the Black and Baltic Seas, Transaction, 2012).
On August 5, one day before his inauguration, Polish president-elect Andrzej Duda said that he would make the creation of such an alliance among the states between the Baltic, Black and Adriatic Seas the centerpiece of his foreign policy efforts. Over time, he suggested, this regional bloc could lead to deeper economic, military and even political integration (Forsal.pl, August 5). Duda then alluded again to this proposal in more generalized terms on his inauguration day (Prezydent.pl, August 6). In doing so, he resuscitated an idea that had been pushed by his predecessor and mentor, the former president Lech Kaczyński, who passionately supported this brainchild of Piłsudski (Natemat.pl, August 5). Kaczyński died in a tragic aircraft accident over western Russia in April 2010—an accident that a small but vocal minority inside Poland remains convinced was caused by Moscow. For its part, Moscow has always been against any type of cooperation among the states of Central-Eastern Europe, viewing it as a kind of wall blocking Russia off from the rest of Europe (Rusjev.net, August 6).
The new Polish head of state clearly sees the time as being ripe for such a push: East-West tensions are at their highest levels since the dark days of the Cold War; Ukraine needs help, and cooperation of this kind with its Central-Eastern European neighbors would open the way for more assistance; the United Kingdom and France are not against an arrangement that might counterbalance growing German power in the East; and Poland itself  is interested in creating an alliance or buffer zone to protect itself against the aggressive designs of Vladimir Putin’s Russia. The United States has not taken a position on this notion, but would likely oppose it if the Intermarium is directed—as it almost certainly would be—against Moscow.
As Viktor Shevchuk writes for Rusjev.net, if Poland and Ukraine were able to unite in this way, they would become, within a decade or so, an economic, and potentially, a military power on the same level as Germany, Britain or France, far surpassing Russia, at least economically.  Moreover, he argues, from a geopolitical perspective, an Intermarium alliance would throw Russia back “to the position it occupied in pre-Petrine times”—that is, largely depriving it of access to Europe except through third countries (Rusjev.net, August 6).
What are the prospects for the formation of an Intermarium alliance or even more? Some in Poland and elsewhere are dismissing this as Duda repaying a debt to his late mentor. They believe his foreign policy promises will have no further consequence beyond empty rhetoric or energizing the Law and Justice’s (the political party of both Duda and Kaczyński) electorate ahead of the upcoming parliamentary elections. Moreover, these same commentators note that under the Polish constitution, President Duda cannot act unilaterally; and they expect Polish parliamentarians to be suspicious of any assumption of such a geopolitical burden, even for possible enormous geopolitical gains (Rusjev.net, August 6).

But the biggest obstacle is Russia: Moscow will do whatever it takes to prevent the formation of such a bloc, not only because of what the Intermarium would mean directly but because the Kremlin would assume that such a grouping or unity would be used by the West as a Trojan horse against Russian interests. Consequently, the prospects for this idea are not great, but its attractions to many in the region are substantial, indeed.

Back
Armenia’s Perspectives on the Iranian ..Next
Resignation of Karachaevo-Cherkessia’s..