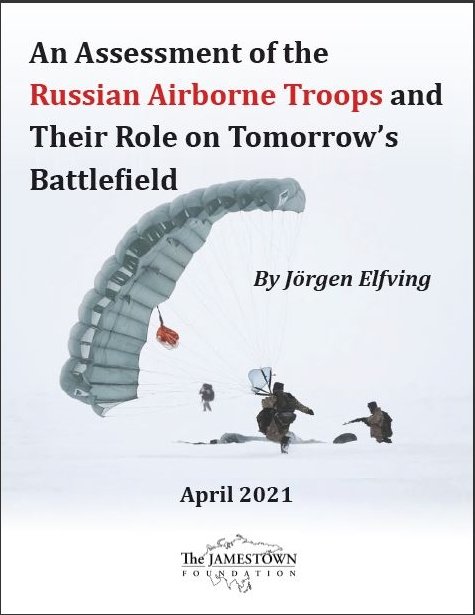 During the last several years, the Russian Airborne Troops (VDV) have undergone important changes in organization as well as the procurement of equipment—a process that is by no means complete. For the foreseeable future, the VDV is set to expand the number of units and continue to introduce modern combat vehicles like the BMD-4M and BTR-MDM. At the same time, however, the changes represent at least a partial return to Soviet practices with the reintroduction of tank units and, in the next few years, helicopter and artillery units to the VDV. In addition, the Airborne Troops’ exercise activities have shown an increased intensity, with progressively more comprehensive drills in recent years. The Russian military leadership clearly continues to see the VDV as having a crucial role to play on the current and future battlefield.

Jörgen Elfving is a former Swedish army and general staff officer. During his military career, he mainly served in staff positions handling the Soviet Union/Russia. He has also previously been posted as a assistant military attaché to the Baltic States. After retiring from the Swedish Armed Forces, Elfving has worked for a number of Swedish government agencies as a consultant and participated in a research project at the Swedish National Defense University regarding the development of Russia’s military capabilities.  In addition, he has been active as a translator and written a number of articles about the Russian military for a Swedish and a foreign audience as well as a book about reforms of the Russian Armed Forces.

To read the full, free report, please click on the PDF link below:

The global natural gas industry is undergoing a historical shift away from overland pipeline deliveries of gas and gradually towards Liquefied Natural Gas (LNG), shipped by seaborne tankers designed to supply distant markets which cannot otherwise be supplied by traditional pipelines. Russia, the world’s largest... MORE
$15.00 – $20.00 Select options
The Occasional Paper, entitled “Northern Nigeria’s Boko Haram: The Prize in Al-Qaeda’s Africa Strategy” is now available for purchase on our website. This Occasional Paper examines the evolution of al-Qaeda’s Africa strategy from its focus on East Africa in the 1990s to the entire African... MORE
$20.00 – $25.00 Select options
Given the recent “reset” policy put in place by the Obama administration with regards to Russia policy, a closer look into the Kremlin’s arm sales practices might prove critical for anyone attempting to decipher Moscow’s foreign policy ambitions.  In Shrinking Ground: Russia’s Decline in Global... MORE
$15.00 – $20.00 Select options
From the fourteenth to the seventeenth centuries, the Christian nations of Europe and the Shiites of Persia were forced to defend their lands against the inroads of an ever expanding Ottoman Empire, an empire whose awesome war machine at times appeared strong enough to absorb... MORE
$20.00 – $25.00 Select options

The Jamestown Foundation is proud to present a webinar on “Broken... END_OF_DOCUMENT_TOKEN_TO_BE_REPLACED

On January 9, The New York Times ran an article on a scandal involving Hong Kong government elites that featured an interview with Jamestown Senior... END_OF_DOCUMENT_TOKEN_TO_BE_REPLACED

In this Quarterly Special Report (QSR) on Mayhem in Mali, we focus on the various Islamist fighters who have taken over northern Mali. The QSR includes profiles of important personalities in the Sahel region such as Abou Zeid, a brutal, committed and resilient militant under whose leadership AQIM has... END_OF_DOCUMENT_TOKEN_TO_BE_REPLACED