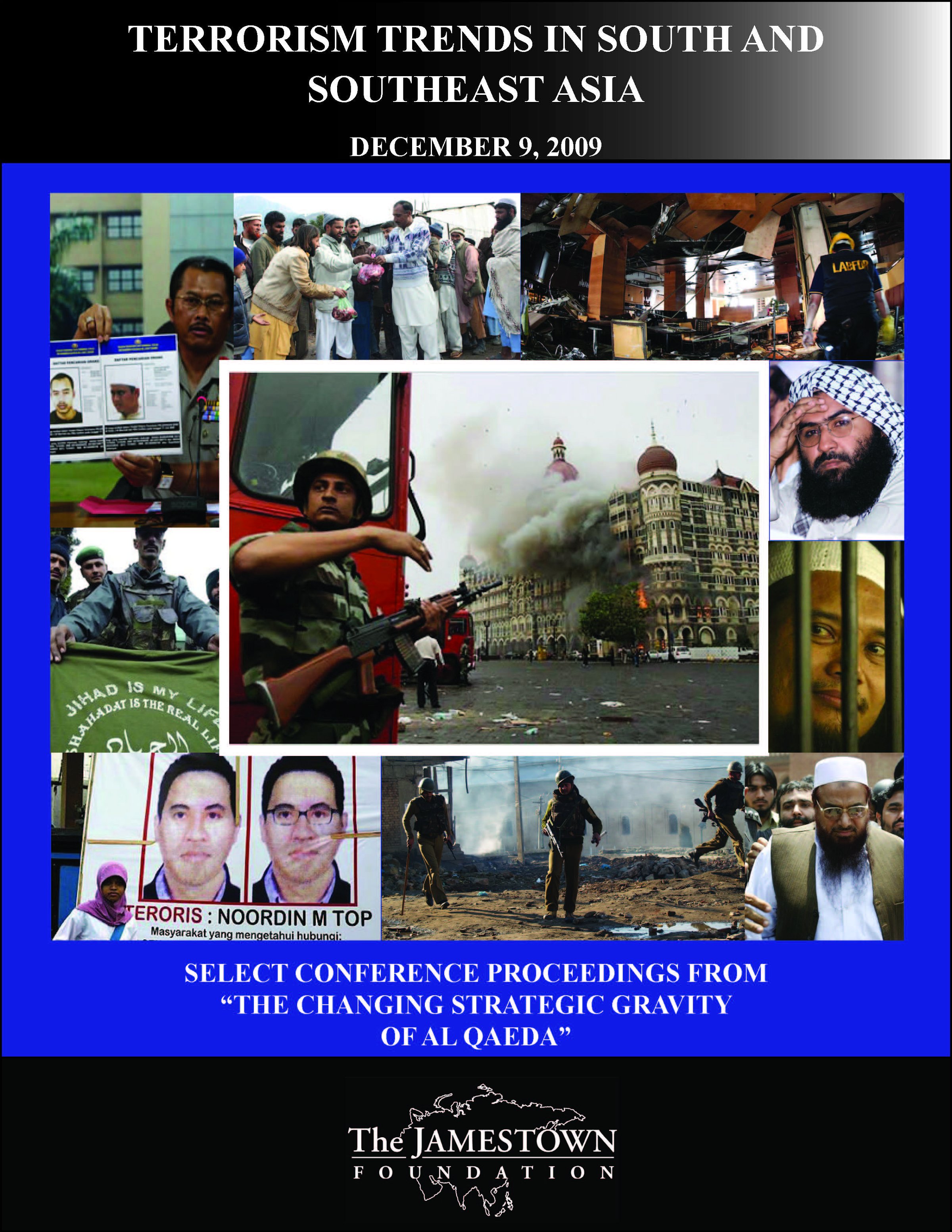 While the Arab Middle East is political Islam’s ideological and historical core, South Asia and Southeast Asia, concentrated in the Indonesian archipelago, make up the modern demographic core of the Muslim world. Advocates of political jihadism have been adept at exploiting pre-existing territorial and ethnic grievances, both perceived and real, in these highly complex and fragmented states. Terror networks in these tumultuous mega-regions have also been cleverly calculating in their agitation of simmering disputes that have arisen from the communal tensions of religious difference that have existed in varying degrees since the region’s violent Cold War-era decolonization.

To better understand the social fabric of terrorism in South and Southeast Asia, The Jamestown Foundation held a panel entitled, “Terrorist Trends in South Asia,” as a component of its annual terrorism conference on December 9th, 2009 at the National Press Club, “The Changing Strategic Gravity of al-Qaeda”. The contents of that panel, including full transcripts, question and answer sessions, executive summaries, slide presentations, panelist biographies and the full transcript of keynote speaker Bruce Riedel’s presentation.

The ongoing struggle for control of Somalia is one of the world’s most complicated. With the country already effectively split into three parts, it may be too late to speak of a Somali nation. While the popular conception of this conflict pits al-Qaeda associated Islamists... MORE
$25.00 – $30.00 Select options
The global natural gas industry is undergoing a historical shift away from overland pipeline deliveries of gas and gradually towards Liquefied Natural Gas (LNG), shipped by seaborne tankers designed to supply distant markets which cannot otherwise be supplied by traditional pipelines. Russia, the world’s largest... MORE
$15.00 – $20.00 Select options
The Changing Face of Islamist Militancy in North Africa contains the proceedings of a panel from Jamestown's December 2008 conference entitled "The Expanding Geography of Militant Jihad." The report includes presentations by Theresa Whelan (Deputy Assistant Secretary of Defense for African Affairs, Office of the... MORE
$20.00 – $29.95 Select options
The tribal areas of Pakistan’s North-West Frontier Province (NWFP) fully deserve President Barack Obama’s description as “the most dangerous place in the world”.  This remote and inhospitable region is only nominally under Pakistan's administration and its Pashtun tribesmen have a long history of opposing outside... MORE
$15.00 – $20.00 Select options

The Jamestown Foundation is pleased to present the hybrid in-person... END_OF_DOCUMENT_TOKEN_TO_BE_REPLACED

On November 17, Jamestown Foundation Senior Fellow Olevs Nikers was interviewed by Romania-based outlet Veridica regarding, among other topics, the best possible outcome for the... END_OF_DOCUMENT_TOKEN_TO_BE_REPLACED