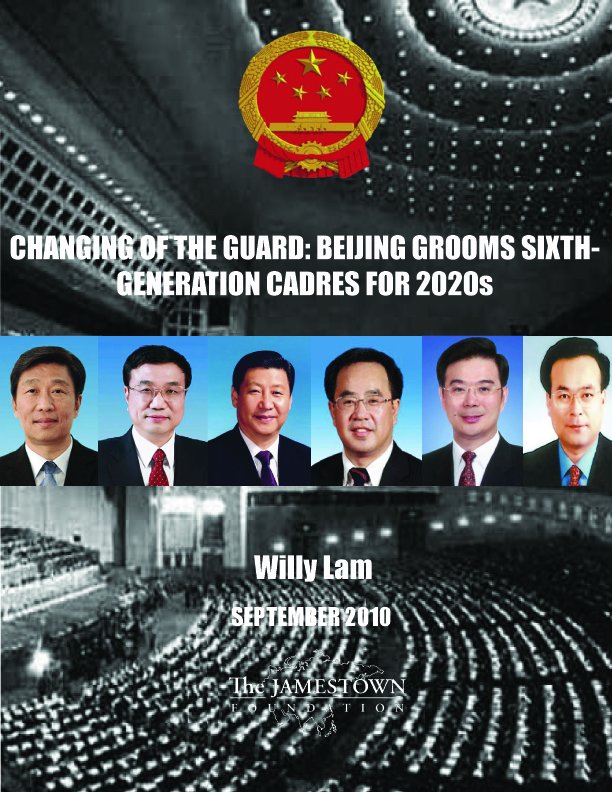 Changing of the Guard: Beijing Grooms Sixth-Generation Cadres for 2020s

“Changing of the Guard: Beijing Grooms Sixth-Generation Cadres for 2020s” details the major generational changes that will take place in the party-and-state leadership at the 18th Chinese Communist Party (CCP) Congress set for October 2012. While Fifth Generation leaders like Vice-President Xi Jinping remain poised to accede to the position of general secretary and state president—and First Vice-Premier Li Keqiang will succeed Wen Jiabao as premier— General Secretary and President Hu Jintao has been personally overseeing the transition of power to-Fifth- and-Sixth-Generation cadres—a reference to officials born respectively in the 1950s and 1960s. With this report, JTF examines elite Chinese politics, especially factional intrigue and the grooming of China’s next leadership corps, in the run-up to and after the 18th Party Congress.

The year 2009 will go down in history as a watershed for the epochal expansion of China’s global influence. With its economy tipped to grow at 8 percent despite the world financial crisis, the People’s Republic of China (PRC) is widely regarded as a prime... MORE
$15.00 – $20.00 Select options
Tensions are on the rise in the South China Sea. Longstanding sovereignty disputes over the profusion of atolls, shoals and reefs that dot the 1.2 million square miles of sea, allied to extensive overlapping claims to maritime space, have been a source of serious interstate... MORE
$15.00 – $20.00 Select options
The Changing Face of Islamist Militancy in North Africa contains the proceedings of a panel from Jamestown's December 2008 conference entitled "The Expanding Geography of Militant Jihad." The report includes presentations by Theresa Whelan (Deputy Assistant Secretary of Defense for African Affairs, Office of the... MORE
$20.00 – $29.95 Select options
The Occasional Paper, entitled “Northern Nigeria’s Boko Haram: The Prize in Al-Qaeda’s Africa Strategy” is now available for purchase on our website. This Occasional Paper examines the evolution of al-Qaeda’s Africa strategy from its focus on East Africa in the 1990s to the entire African... MORE
$20.00 – $25.00 Select options

The Jamestown Foundation was proud to host a webinar on... END_OF_DOCUMENT_TOKEN_TO_BE_REPLACED

Jamestown Foundation Analyst Richard Arnold was interviewed by PolitiFact for a story on the Lie of the Year 2022, or Putin’s long list of lies... END_OF_DOCUMENT_TOKEN_TO_BE_REPLACED

The February 2020 issue features a brief on Mullah Nangialai, an influential leader of a Taliban splinter group in Herat who was recently killed in an airstrike; a look at Abu Hajar al-Hashemi, the “Governor” of Islamic State’s Sinai province; a comparison of 2 men who ran Islamic State... END_OF_DOCUMENT_TOKEN_TO_BE_REPLACED