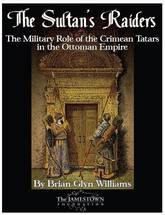 The Sultan’s Raiders: The Military Role of the Crimean Tatars in the Ottoman Empire

From the fourteenth to the seventeenth centuries, the Christian nations of Europe and the Shiites of Persia were forced to defend their lands against the inroads of an ever expanding Ottoman Empire, an empire whose awesome war machine at times appeared strong enough to absorb its immediate neighbors. One of the most interesting, and militarily effective groups utilized by the Ottomans in their seemingly endless wars were the Tatars of the Crimean Peninsula. In their three hundred years of service, the Crimean Tatars contributed more to the Ottoman military than did any other of the Sultan’s non-Turkish subjects, and the account of their service with the Sultan is one of the most unusual chapters in European history. The Sultan’s Raiders: The Military Role of the Crimean Tatars in the Ottoman Empire by Tatar expert Dr. Brian Glyn Williams explores the role of the Crimean Tatars in the Ottoman Empire’s military campaigns against its neighbors with the aim of providing some insight into the controversial relationship between these two states and peoples.

The global natural gas industry is undergoing a historical shift away from overland pipeline deliveries of gas and gradually towards Liquefied Natural Gas (LNG), shipped by seaborne tankers designed to supply distant markets which cannot otherwise be supplied by traditional pipelines. Russia, the world’s largest... MORE
$15.00 – $20.00 Select options
Pakistan’s Punjab Province is home to some of the world’s most insidious terrorist groups and Islamist political organizations. Islamist and jihadist groups, organized under different Islamic sects, have flourished in Punjab and among Punjabis elsewhere. The roots of Islamist militancy in the Muslim Punjab can... MORE
$15.00 – $20.00 Select options
The tribal areas of Pakistan’s North-West Frontier Province (NWFP) fully deserve President Barack Obama’s description as “the most dangerous place in the world”.  This remote and inhospitable region is only nominally under Pakistan's administration and its Pashtun tribesmen have a long history of opposing outside... MORE
$15.00 – $20.00 Select options
The year 2009 will go down in history as a watershed for the epochal expansion of China’s global influence. With its economy tipped to grow at 8 percent despite the world financial crisis, the People’s Republic of China (PRC) is widely regarded as a prime... MORE
$15.00 – $20.00 Select options