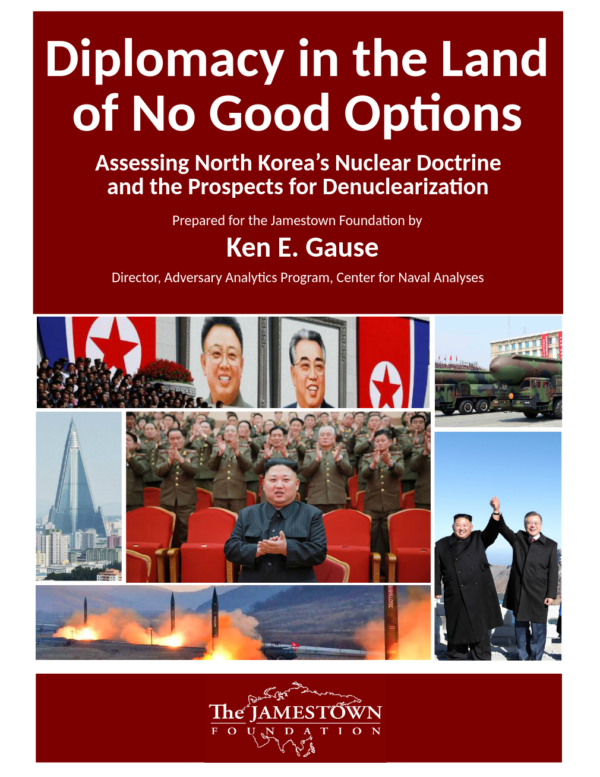 Diplomacy in the Land of No Good Options: Assessing North Korea’s Nuclear Doctrine and the Prospects for Denuclearization

It is late in 2018, a year that has been characterized by twists and turns in the U.S.-North Korean relationship. It may prove to be a pivotal year in the 70-year history of this tortured relationship. Or, as many pundits predict, it may turn out to be another journey down a rabbit hole that eventually returns us to the status quo. The fundamental question is whether North Korea is prepared to give up its nuclear program and whether the United States and its allies have the right plan in place to realize this goal.

Critics point to the well-worn narrative about North Korea as a regime that cannot be trusted, will never give up its nuclear program, and is only playing the international community in order to buy time. In fact, it adheres to its long-held strategy of driving a wedge between the United States and South Korea that eventually drives the former from the peninsula and lays the groundwork for eventual Korean reunification under Pyongyang’s control. The nuclear program is critical to this strategy since it deters the United States from pursuing regime change.

The real question for many Pyongyang watchers and Asia experts concerns the United States. The desired outcome for North Korea remains the same (denuclearization), but U.S. policy has changed radically under President Trump. In the year and a half since taking office, the rhetoric of the Trump administration has shifted from “Fire and Fury” to “Falling in Love”. Some analysts believe that this is in keeping with President Trump’s traditional strategy of taking a challenge head-on and then backing off to see what gains have been made. Others believe that his strategy is purely transactional; when pressure and threats did not work, the United States shifted to engagement. Some believe the current administration has no strategy beyond the traditional sole U.S. objective of achieving denuclearization. The vaunted Maximum Pressure Strategy resonates with many, but is based on assumptions of international support that have never fully materialized.

This paper considers this narrative that dominates Western analysis, but argues that it is too simplistic and lacks a real understanding of the other side of the equation. In order to understand the art of the possible when it comes to denuclearization, one must begin with the North Korean calculus. What is the role of the nuclear program? How does it fit within North Korea’s military doctrine? How is it related to the legitimacy of the leader and the basic goals of the regime? This paper argues that the foundations of the nuclear program go back to the early 1950s and over the decades have grown in importance as North Korea’s conventional forces have atrophied. At the same time, the legitimacy of the Kim family has become intertwined with the nuclear program. To simply relinquish the program or even trade it up front for some promise of economic and security guarantees risks not only undermining North Korea’s self-perceived need for a deterrent against U.S. aggression, but rips at the very legitimacy of the Kim family. In other words, the nuclear program is tied to the regime’s two fundamental goals: regime survival and perpetuation of Kim family rule.

On December 9, 2009, the Jamestown Foundation organized a special panel on "Islamist Movements in the Horn of Africa" as part of its annual conference, the latter appropriately titled "The Changing Strategic Gravity of al-Qaeda".  This report is comprised of the proceedings from this important... MORE
$15.00 – $20.00 Select options
Jamestown presents a complete summary of the May 12, 2011 event entitled 'The Future of Kazakhstan After the Presidential Election Event Summary' featuring discussions byJamestown Senior Fellow Vladimir Socor, Janusz Bugajski, Ambassador William Courtney, and Ambassador Erlan Idrissov. For a free hard copy of this... MORE
$10.00 Select options
Russia has always had a difficult time reconciling itself to accepting Ukraine as an independent state and a country that is outside its sphere of influence. Russia has an even more impossible time recognizing Ukraine’s sovereignty over the Crimea and the port of Sevastopol -... MORE
$9.95 – $14.95 Select options
On November 14, 2011, The Jamestown Foundation held a conference on Central Asia entitled, “Central Asia, Afghanistan and the New Silk Road: Political Economic and Security Challenges” at the University Club in Washington, DC. This full-length transcription covers three conference panels and keynote remarks featuring:... MORE
Select options

The Jamestown Foundation was proud to host a conference on... END_OF_DOCUMENT_TOKEN_TO_BE_REPLACED

On June 6, Jamestown’s President Glen E. Howard was quoted by Task and Purpose in an article on Russia’s Chechen fighters in Ukraine. END_OF_DOCUMENT_TOKEN_TO_BE_REPLACED