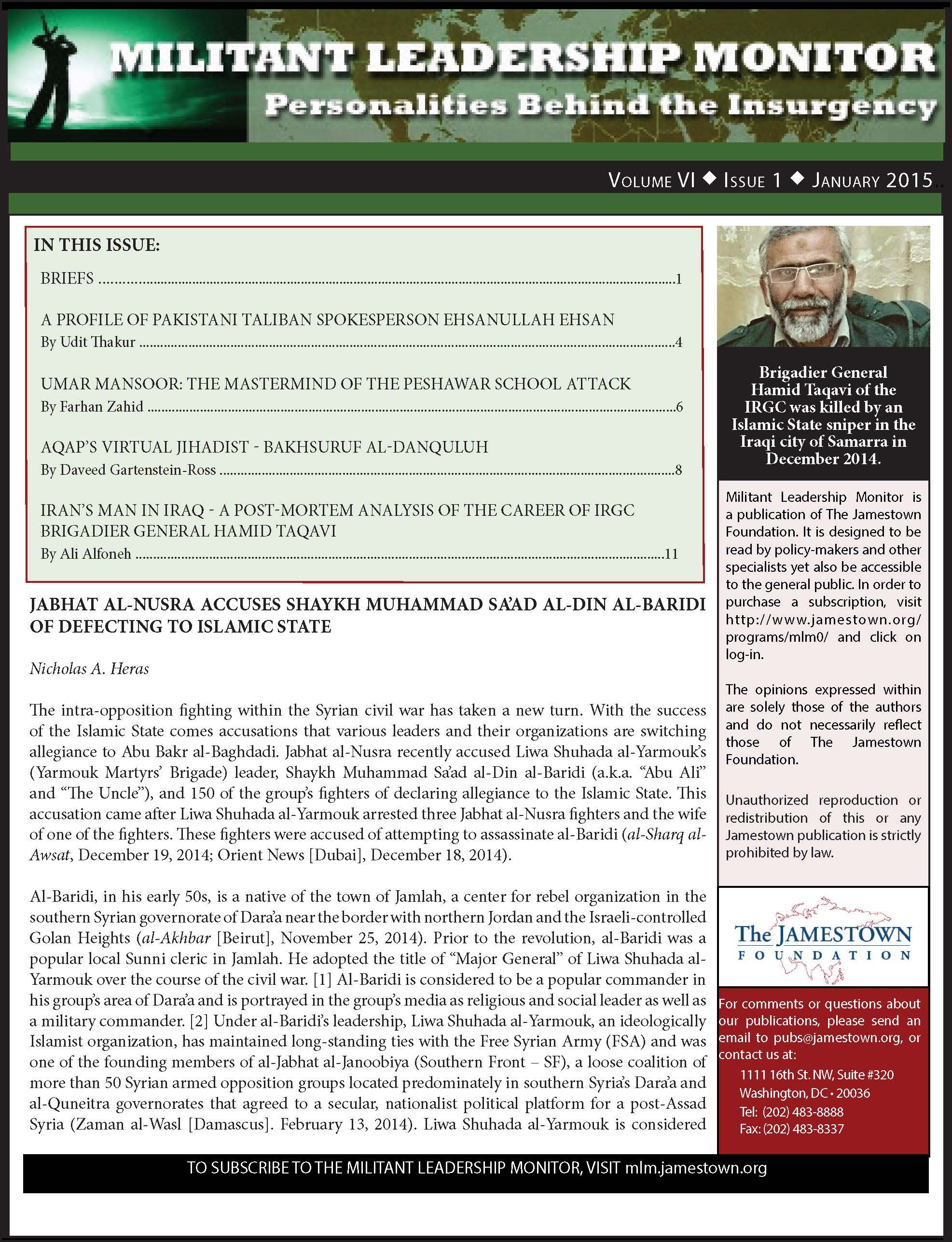 The January 2015 issue of Militant Leadership Monitor begins with two briefs on Syrian fighters by Nicholas Heras. Shaykh Muhammad Sa’ad al-Din al-Baridi is the leader of Liwa Shuhada al-Yarmouk; Jabhat al-Nusra recently accused al-Baridi of defecting to the Islamic State. Rafid Abd al-Razaq Taha, the leader of Liwa Usud al-Islam, may have also declared allegiance to the Islamic State. Next, a profile of Ehsanullah Ehsan, spokesperson for the TTP and now Jamaat ul-Ahrar, is provided by Udit Thakur. Farhan Zahid follows with a glimpse of the mastermind of the Peshawar school attack, Umar Mansoor. Bakhsuruf al-Danquluh, a leading AQAP figure who is very influential on jihadist forums and Twitter, is then profiled by Daveed Gartenstein-Ross. In closing, Ali Alfoneh gives a post-mortem analysis of IRGC Brigadier General Hamid Taqavi, who was killed by an Islamic State sniper in Samarra, Iraq.

The September Issue of Militant Leadership Monitor focuses on militant leaders in Africa and the Middle East. In the first brief, Nicholas A. Heras analyzes an Iraqi Shiite militia leader who has vowed vengeance if the United States and its Allies launch a strike on Syria. The... MORE
$20.00 – $25.00 Select options
This issue of Militant Leadership Monitor begins with a profile by Guy Fricano of Mexico's Miguel Trevino of Los Zetas who is being targeted for character assassination. Arif Jamal provides a portrait of the top LeT ideologue Amir Hamza. In in-depth look at Mallam Muhammadu, the ideological... MORE
$20.00 – $25.00 Select options
In this Quarterly Special Report (QSR) on the conflict in South Sudan, we focus on the civil wars, border disputes and rivalries between ethnic groups that have resulted in over half a century of violence in the country. The QSR begins with an overview by... MORE
$20.00 – $25.00 Select options
In this “Special Report on The Syrian Uprising: A Focus on Parties and Leadership” we examine the roles of key religious, military, and political actors in the Syrian uprising. This 2012 Quarterly Special Report features five brand-new articles commissioned by The Jamestown Foundation and one highly... MORE
$20.00 Select options

The Jamestown Foundation is proud to present a webinar on “Broken... END_OF_DOCUMENT_TOKEN_TO_BE_REPLACED

On January 27, The New York Times published an article concerning Russia’s military modernization and its impact on the Ukraine crisis. In the article, Jamestown Board... END_OF_DOCUMENT_TOKEN_TO_BE_REPLACED