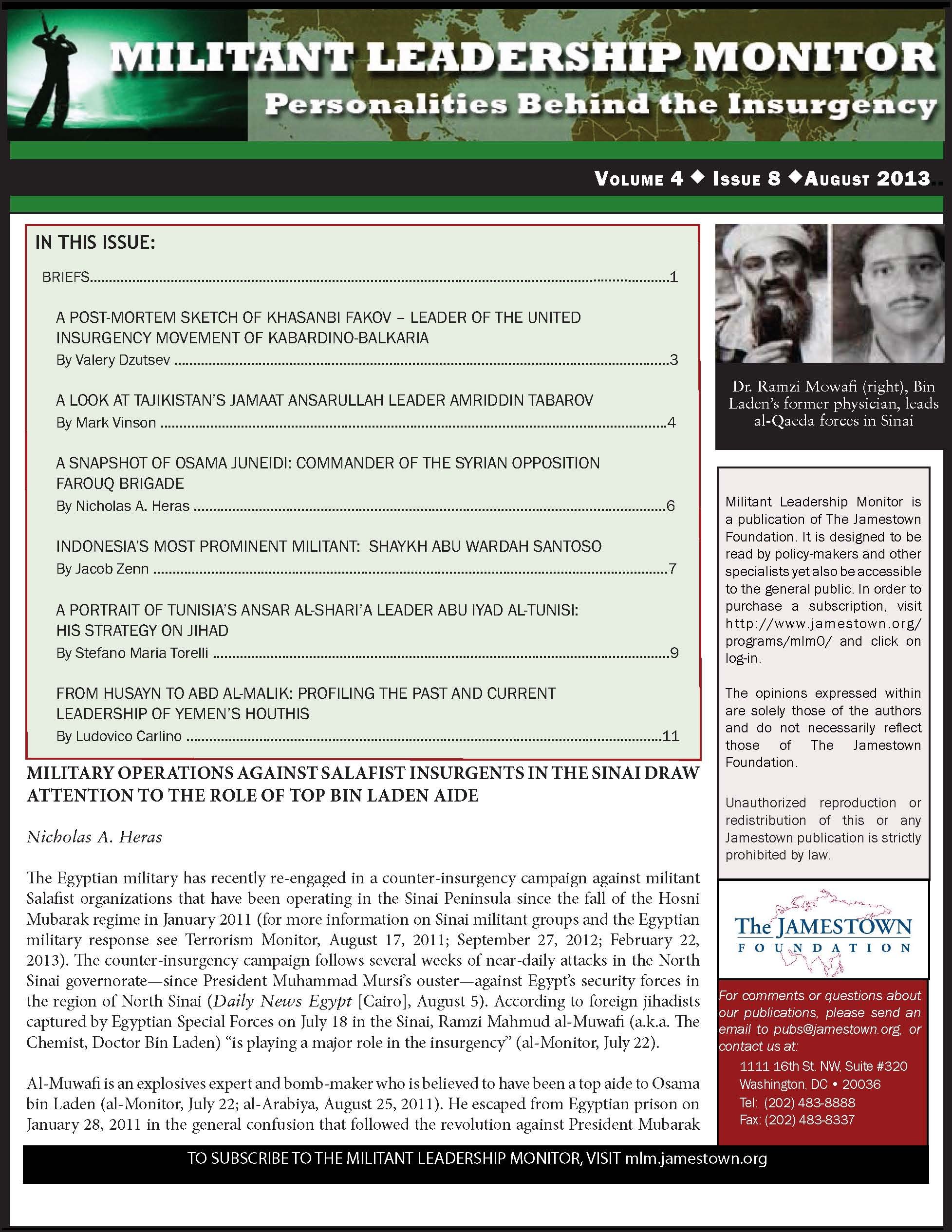 The August Issue of Militant Leadership Monitor is a special issue. The report begins with two briefs by Nicholas A. Heras on Bin Laden aide Ramzi Mahmud al-Muwafi and Syrian YPG Commander Sipan Hemo, respectively. The following two profiles come from Eurasia Daily Monitor regular contributors Valery Dzutsev with a post-mortem sketch of Khasanbi Fakov from the North Caucasus, and Mark Vinson with a look at Tajikistan’s Amriddin Tabrov. Nicholas Heras follows with a snapshot of Syrian opposition commander Osama Juneidi. Jacob Zenn comes next with a profile of Shaykh Abu Wardah Santoso, Indonesia’s most prominent militant. Stefano Maria Torelli provides a profile of Ansar al-Shari’a Tunisia leader Abu Iyad al-Tunisi. The issue concludes with a overview of the past and current leadership of Yemen’s Houthis by Ludovico Carlino.

The April issue of Militant Leadership Monitor begins with a profile of Maysar Ali Al-Jabouri, a Jabhat al-Nusra amir who is encouraging the split between al-Nusra and ISIS in Syria. This is followed with the next brief covering the connection between anti-balaka militias and Patrice Edouard Ngaissona in the Central African Republic.... MORE
$20.00 – $25.00 Select options
In this Quarterly Special Report (QSR) on the conflict in South Sudan, we focus on the civil wars, border disputes and rivalries between ethnic groups that have resulted in over half a century of violence in the country. The QSR begins with an overview by... MORE
$20.00 – $25.00 Select options
This issue of Militant Leadership Monitor includes in-depth portraits of Tripoli's Hussam Abdullah Sabbagh, Hamas Political Bureau Chief Khalid Meshaal, Egypt's Muhammad al-Zawahiri and the Toulouse gunman Muhammad Merah.
$20.00 – $25.00 Select options
This issue of Militant Leadership Monitor begins with a profile by Guy Fricano of Mexico's Miguel Trevino of Los Zetas who is being targeted for character assassination. Arif Jamal provides a portrait of the top LeT ideologue Amir Hamza. In in-depth look at Mallam Muhammadu, the ideological... MORE
$20.00 – $25.00 Select options
Shopping Cart

*A free e-book of this title is available for download below. Russia’s attack on Ukraine and the dismemberment of its territory is not an isolated operation. It constitutes one component of a broader strategic agenda to rebuild a Moscow-centered bloc designed to compete with the West. The acceleration of... END_OF_DOCUMENT_TOKEN_TO_BE_REPLACED