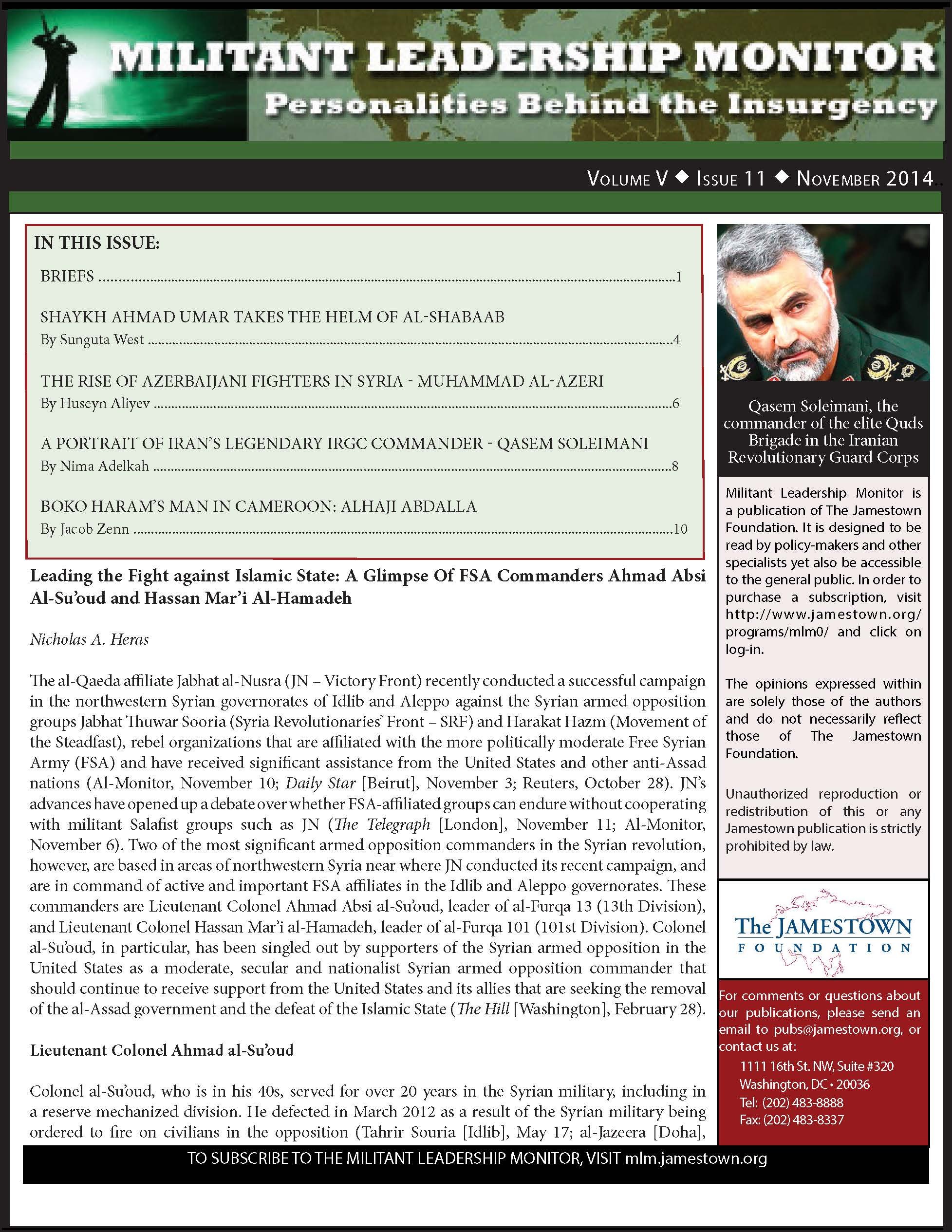 The November 2014 issue of Militant Leadership Monitor begins with a snapshot of two Syrian military defectors who are now FSA commanders by Nicholas Heras. Ahmad Absi Al-Su’oud defected in March 2012 and now leads al-Furqa 13 while Hassan Mar’i Al-Hamadeh defected with his MiG-21 in June 2012 and now commands al-Furqa 101. Next, Sunguta West profiles the new leader of al-Shabaab, Ahmad Umar. This is followed with a look at Muhammad al-Azeri, the main leader of Azerbaijani fighters in Syria. Then, the shadow commander of Iran’s Revolutionary Guard Corps, Qasem Soleimani, is profiled by Nima Adelkah. Finally, Jacob Zenn covers Boko Haram’s key negotiator in Cameroon Alhaji Abdalla.

In this month's issue of Militant Leadership Monitor, Jamestown analysts have written about militant and criminal underworld figures across the globe. In light of the rising tension between Lebanese Sunnis and Shiites that is being expressed in Syria, Murad Batal al-Shishani drew up a portrait... MORE
$20.00 – $25.00 Select options
This issue of Militant Leadership Monitor includes in-depth analyses of Ansaru's Khalid al-Barnawi, the Niger Delta's al-Haji Mujahid Dokubu-Asari, succession scenarios after Talabani, and the second part of a who's who in the Jordanian Opposition.
$20.00 – $25.00 Select options
In this “Special Report on Boko Haram: Nigeria’s Islamist Movement” we examine the rise of Boko Haram’s elusive leader Abu Shekau, and the policies of the group’s charismatic leader – Mohammed Yusuf – the former leader whose death in 2009 led to Abu Shekau’s rise... MORE
$20.00 – $25.00 Select options
The November Issue of Militant Leadership Monitor features two briefs by Nicholas A. Heras. The first focuses on the recent announcement of the formation of al-Jabhat al-Islamiya (Islamic Front), a coalition of seven powerful opposition groups in Syria, with a look at one of its... MORE
$20.00 – $25.00 Select options

The Jamestown Foundation was proud to host a conference on... END_OF_DOCUMENT_TOKEN_TO_BE_REPLACED

On June 6, Jamestown’s President Glen E. Howard was quoted by Task and Purpose in an article on Russia’s Chechen fighters in Ukraine. END_OF_DOCUMENT_TOKEN_TO_BE_REPLACED

In this “Special Report on The Syrian Uprising: A Focus on Parties and Leadership” we examine the roles of key religious, military, and political actors in the Syrian uprising. This 2012 Quarterly Special Report features five brand-new articles commissioned by The Jamestown Foundation and one highly relevant article from The... END_OF_DOCUMENT_TOKEN_TO_BE_REPLACED