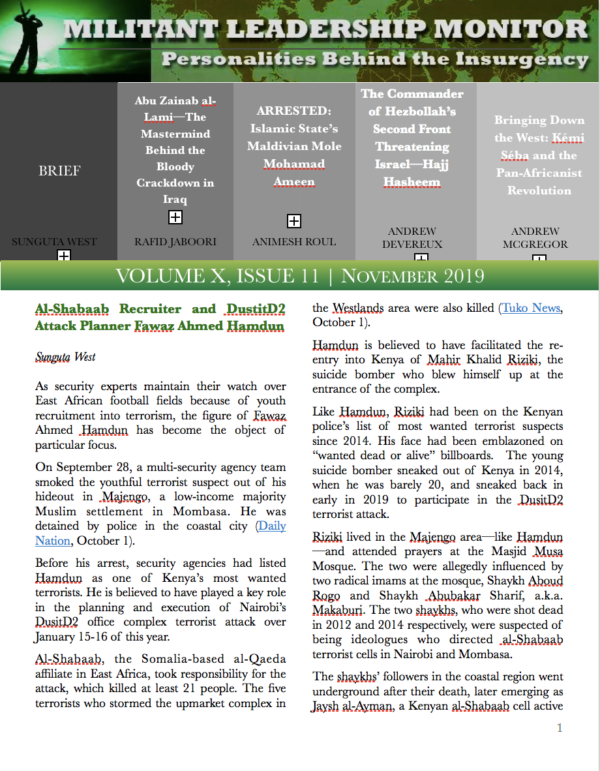 The November 2019 issue features a brief on former football player turned terrorist attack planner Fawaz Ahmed Hamdun; a look into Abu Zainab al-Lami, the mastermind behind the recent crackdown on Iraqi protesters; an analysis of the arrest of Maldivian Islamic State recruiter Mohamad Ameen and what it means for the extremist threat in the island country; an examination of Hajj Hasheem, the Hezbollah commander attempting to open a second front against Israel in Syria; and a deep dive into Kemi Seba, the Pan-Africanist meeting with Russian leaders in a bid to push the West, and France in particular, out of Africa.

This issue of Militant Leadership Monitor begins with a profile by Guy Fricano of Mexico's Miguel Trevino of Los Zetas who is being targeted for character assassination. Arif Jamal provides a portrait of the top LeT ideologue Amir Hamza. In in-depth look at Mallam Muhammadu, the ideological... MORE
$20.00 – $25.00 Select options
The April issue of Militant Leadership Monitor begins with a profile of Maysar Ali Al-Jabouri, a Jabhat al-Nusra amir who is encouraging the split between al-Nusra and ISIS in Syria. This is followed with the next brief covering the connection between anti-balaka militias and Patrice Edouard Ngaissona in the Central African Republic.... MORE
$20.00 – $25.00 Select options
In this month's issue of Militant Leadership Monitor, Jamestown analysts have written about militant and criminal underworld figures across the globe. In light of the rising tension between Lebanese Sunnis and Shiites that is being expressed in Syria, Murad Batal al-Shishani drew up a portrait... MORE
$20.00 – $25.00 Select options
The August Issue of Militant Leadership Monitor is a special issue. The report begins with two briefs by Nicholas A. Heras on Bin Laden aide Ramzi Mahmud al-Muwafi and Syrian YPG Commander Sipan Hemo, respectively. The following two profiles come from Eurasia Daily Monitor regular... MORE
$20.00 – $25.00 Select options