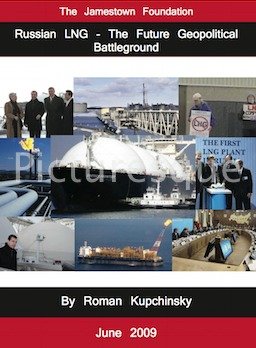 The global natural gas industry is undergoing a historical shift away from overland pipeline deliveries of gas and gradually towards Liquefied Natural Gas (LNG), shipped by seaborne tankers designed to supply distant markets which cannot otherwise be supplied by traditional pipelines. Russia, the world’s largest producer of gas, has stated that it is determined to become a leading player in the emerging LNG business. With the opening of the Russian LNG terminal on Sakhalin Island in 2009, Russia joined the global LNG market. The country’s leadership has stated that LNG will play a significant role in its changing energy strategy and has followed these claims with a number of important steps meant to position its gas monopoly, Gazprom, to become a major player on the world LNG market. Kremlin strategists hope that over time LNG will become just as powerful a tool in its foreign policy goals as pipeline-supplied gas is today. The facts, however, point in the opposite direction and Moscow could well be in for a surprise as their strategic aspirations may exceed their capacity to meet those expectations.

The Changing Face of Islamist Militancy in North Africa contains the proceedings of a panel from Jamestown's December 2008 conference entitled "The Expanding Geography of Militant Jihad." The report includes presentations by Theresa Whelan (Deputy Assistant Secretary of Defense for African Affairs, Office of the... MORE
$20.00 – $29.95 Select options
The ongoing struggle for control of Somalia is one of the world’s most complicated. With the country already effectively split into three parts, it may be too late to speak of a Somali nation. While the popular conception of this conflict pits al-Qaeda associated Islamists... MORE
$25.00 – $30.00 Select options
On December 9, 2014, the Jamestown Foundation organized the Eighth Annual Terrorism Conference. This report contains eight papers from presenters at the conference. Michael W. S. Ryan leads with “The Islamic State: What Victory Means.” Nicholas A. Heras then discusses “Swimming in a Turbulent Sea? Non-State Threats... MORE
$20.00 – $24.95 Select options
The Occasional Paper, entitled “Northern Nigeria’s Boko Haram: The Prize in Al-Qaeda’s Africa Strategy” is now available for purchase on our website. This Occasional Paper examines the evolution of al-Qaeda’s Africa strategy from its focus on East Africa in the 1990s to the entire African... MORE
$20.00 – $25.00 Select options

The Jamestown Foundation was proud to host a conference on... END_OF_DOCUMENT_TOKEN_TO_BE_REPLACED

On June 6, Jamestown’s President Glen E. Howard was quoted by Task and Purpose in an article on Russia’s Chechen fighters in Ukraine. END_OF_DOCUMENT_TOKEN_TO_BE_REPLACED