At the beginning of March 2016, a large coalition of organizations opposed to the president of the breakaway Georgian republic of Abkhazia, Raul Khajimba, started gathering signatures calling for a referendum. The proposed question for the referendum is “Do you consider it necessary to hold early presidential elections in the Republic of Abkhazia?” As of March 29, according to one of the activists of the campaign, Astamur Pachulia, the opposition had gathered 14,700 signatures, when only 10,000 are required by law. The powerful organization of veterans of the Abkhaz-Georgian war of 1992–1993, Amtsakhara, is the main backer of the referendum to force the region’s president to step down. The opposition is unhappy mainly with the economic policies of the current government (Kavkazskaya Politika, April 1). Khajimba’s opponents also accuse him of failing to implement the political reforms he promised, the main one being to curb the power of the executive branch while increasing the power of the legislature (Kommersant, March 24).

An ex-KGB officer, Khajimba came to power in Abkhazia in September 2014, after he led the successful campaign to oust the previous head of the breakaway republic, Alexander Ankvab. Now the opposition accuses Khajimba of usurping power. Moscow has generally favored him over other political figures in Abkhazia. The first large-scale political scandal involving Khajimba took place during the presidential elections in Abkhazia in 2004, when Abkhazian voters surprised Moscow by voting for Sergei Bagapsh instead of Khajimba. In 2005, Moscow forced Bagapsh and his supporters to give the position of vice-president of the republic to Khajimba, but it took the ex-KGB officer another nine years to become the president of Abkhazia.

When Moscow’s long-time protégé came to power in Abkhazia, locals expected the Russian government to increase its support for its satellite state. The deal appeared to be simple: Moscow would receive greater control over Abkhazia in return for increasing its financial backing of the republic. However, even with Khajimba as the head of Abkhazia, Moscow faced an uphill battle to establish tighter control over the breakaway Georgian territory. In October 2014, one month after Khajimba officially became Abkhazia’s president, the Russian government unveiled a new treaty on cooperation and integration with the republic. The treaty envisaged eliminating the Abkhazian army by merging it with the Russian military. The treaty also aimed at replacing Abkhazian government institutions with “joint” institutions that would obviously be dominated by the Russian side. On October 22, 2014, Khajimba surprised many by stating that the treaty with Russia could not be signed as it was presented by Russia and had to be rewritten (Kavkazsky Uzel, November 5, 2014).

The Abkhazian government also did not show much leniency on the other issue that the Russians regarded as vital and quite vexing—the issue of citizenship and real estate. Currently, Abkhazia’s legislation prohibit non-citizens from buying real estate property in the republic. Even though various illegal schemes exist to bypass these laws, the Abkhazian government is adamant about preventing foreigners from buying up lucrative real estate on the Black Sea coast. Russians are the most likely buyers and the most likely targets of the restrictions (Sputnik-abkhazia.ru, October 29, 2015).

Moscow’s revenge on the government of Raul Khajimba and all the residents of Abkhazia quickly followed: since the middle of 2015, Moscow has practically stopped financing Abkhazia. Given the fact that about two-thirds of Abkhazia’s budget comes from money it receives from Moscow, it was a hard blow on the republican economy. Abkhazian officials pretend nothing happened between the republic and Russia, saying that Russia had to cut aid to the republic because of international sanctions, the need to support Crimea and other adverse circumstances. Moscow also does not comment on the pressure it is putting on Abkhazia. However, experts warn that “the absence of the promised Russian financial injections is the primary factor that weakens the positions of the current Abkhaz authorities and strengthens the social base of their opponents” (Kavkazskaya Politika, April 1).

Russia promised about $120 million in financial aid for Abkhazia in 2015, which is a substantial amount of money for the breakaway region’s 240,000 residents but not so significant for Russia. Whatever hardships Russia faces, it is unlikely that it did not have that money to send to Abkhazia. Instead, Moscow appears to be sending Khajimba, its protégé, the message that he should live up to the expectations Moscow has for him. Russia has promised to increase aid for Abkhazia, but it is unclear how much money the region will receive. In 2015, out of the promised $120 million, Abkhazia actually received only about $40 million (Kommersant, March 24).

A genuine decline also exists in Russian resources, and if Moscow does not make an effort to keep up the financing of its satellite states, the regimes it has installed there may start crumbling. It certainly appears that Abkhazia may undergo another change of government if Moscow does not increase its financial backing for Khajimba’s administration. 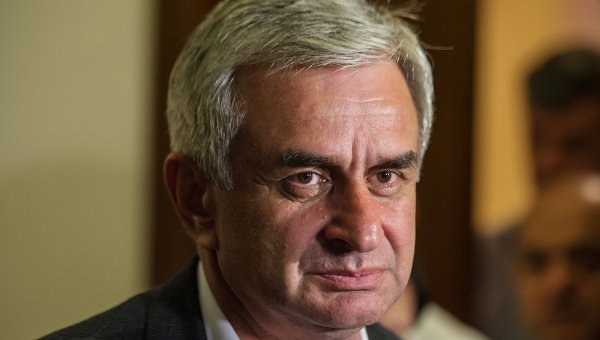 Back
Peculiarities of Public Opinion in Belar..Next
Moscow Plays the Arctic Card in Its Asia..