In the past week, two notable events sparked heated debate in the Belarusian and Russian press: the dispensation to Belarus of a Russian $2 billion loan and a visit to Minsk by Michael Carpenter, the United States’ Deputy Assistant Secretary of Defense for Russia, Ukraine and Eurasia.

Regarding the loan, multiple analysts marveled at Belarusian President Alyaksandr Lukashenka’s ability to extract much-needed aid from Russia, even despite the two countries’ ongoing tensions. For example, in February–March, Belarus was accused of violating the bilateral agreement on delivering refined oil products to Russia in exchange for duty-free oil. However, in early March the average retail price of medium-quality gasoline in Russia was 36.8 rubles or $0.55 per liter, whereas in Germany it was $1.39 per liter—or 2.5 times higher. Therefore, Belarus delivered only 0.2 percent of its 2015 monthly amount of refined oil to Russia, which elicited angry rebukes from Russian officials (Gazeta.ru, March 17). Nevertheless, the Kremlin ultimately decided to issue a major loan to support Belarus’s ailing economy. Why?

According to Artyom Shraibman of Tut.by, denying aid to Belarus in a critical situation may be fraught with more risk for Moscow, than simply rendering it the needed financial support. This is, firstly, because Belarus is the most important and stable corridor for the export of Russian hydrocarbons. Second, despite close Belarusian-Russian ties, there is no organized pro-Russian political faction inside Belarus that Russia could possibly depend on or support were Lukashenka to suddenly be ousted. Any attempts to set up such an organizational structure were repeatedly nipped in the bud by Lukashenka. This was the case with the Belarusian Slavic Committee, organized by former parliamentarian Sergei Kostian. He had attempted to register it as a political party in Belarus soon after Russia annexed Crimea, only to be obstructed from doing so by the government in Minsk. Kostian’s activists had to abandon the group under threat. In other words, while all of the Belarusian opposition is effectively pro-Western, nobody is allowed to be more pro-Russian than Lukashenka himself. Under such a situation, supporting Lukashenka, however begrudgingly, is seen by Kremlin decision-makers as the lesser evil compared to not supporting him (Carnegie.ru, March 30).

The current economic situation in Belarus is grim indeed. In 2015, the GDP was 3.9 percent below that in 2014. But in contrast to Russia, which itself sustained a 3.7 percent decline last year, Belarus has minuscule hard currency reserves on which to rely; on January 1, 2016, these Belarusian reserves amounted to $4.1758 billion (Gazeta.ru, March 17). In January, Belarus’s exports were 21.2 percent lower than in January 2015. Revenues from refined oil exports have declined by 33 percent, while the revenues from potassium (potash) exports shrank by 37 percent, due to low prices (Tut.by, March 20). So Minsk urgently needs loans in order to stay solvent and maintain its social spending levels. Obviously, it would be best to be able to receive loans from various sources, but the International Monetary Fund (IMF) has so far been procrastinating on resuming a loan program for Belarus, while European lenders have not yet started theirs.

Against this backdrop, further improvement of Belarus’s relations with the United States may be a useful strategy. The visit by Deputy Assistant Secretary of Defense Carpenter, and his reception by Lukashenka, were seen in the two countries as a modest step in that direction. But Carpenter’s visit has apparently greatly irritated Moscow. Even Lenta.ru—a fairly moderate Russian news portal and a far cry from the fervent nationalist “patriotic” rhetoric of, say, Regnum—published a critical commentary titled “On Two Chairs: Why Does Lukashenka Taunt Moscow by His Friendship With Washington?” The commentary makes a lot out of the observation that earlier, in December 2015, when a Belarusian delegation visited Washington, one of its members was an official from the Ministry of Defense—a fact that was not then disclosed, but which has now become clear. Moreover, the Lenta.ru article accuses Minsk of “being carried away by its own geopolitical game so much that it is on the verge of losing control over the situation.” And “having kindly embraced Carpenter, Minsk actually spat in the direction of Moscow” (Lenta.ru, April 1).

Such a tone seems to transcend the actual significance of the visit. It is, however, beyond doubt that Minsk has increasingly allowed itself to deviate from a range of positions taken by Moscow. Notably, in a series of articles in the major government daily Belarus Segodnya, Yury Tsarik commends the workhorses of Russian propaganda for skillfully brainwashing the domestic audience but then suggests that the worldview resulting from that indefatigable work “is simply dangerous for my country, Belarus” (Belarus Segodnya, February 26). And in a later article, he explicitly interprets the goal of the Kremlin’s military campaign in Syria as “stirring up the conflict in anticipation of oil and gas price hikes, the destruction of the American-Iranian partnership, and [Russia’s] participation in the projects of [oil and gas extraction] from eastern Mediterranean shelf deposits.” The Belarusian journalist also sees Moscow as betraying Tehran so as to induce Iranian hardliners to pre-emptively violate their country’s major nuclear deal with the international community (Belarus Segodnya, March 15).

Such a distancing from Moscow’s positions occurs not due to but rather despite public opinion inside Belarus. Indeed, according to the March national survey by the Independent Institute for Socioeconomic and Political Studies, 58 percent of Belarusians still believe that the annexation of Crimea equals upholding historical justice, while only 27 percent believe otherwise; 51 percent of Belarusians blame the Ukrainian authorities for the lack of realization of the Minsk accords, and only 21 percent blame Russia; three-quarters of Belarusians consider Russians their most culturally close ethnic group; and 60 percent are against replacing Russian Literature in the secondary school curriculum with a course on World Literature (Tut.by, March 29).

These people not only speak Russian, they are attached to Russian channels of information and quite often do not detach themselves from Russia. Surprisingly few Western Belarus watchers realize that the Belarusian leadership is actually sailing against the tide of its public opinion and, to the extent possible, deserves credit for doing so. 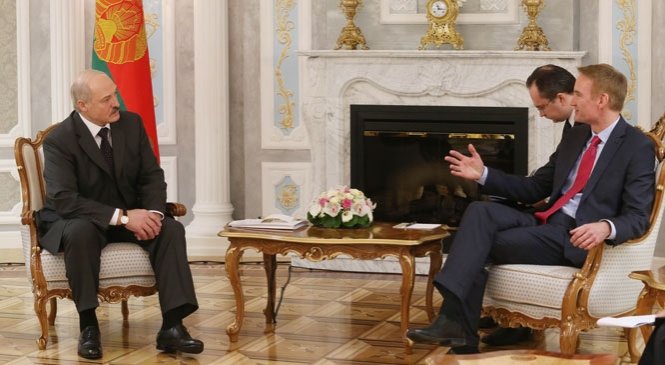