The recent landing of a Y-8X maritime surveillance aircraft on Fiery Cross Reef (永暑礁) in the South China Sea in response to an emergency is further evidence that China has made its presence in this contentious region routine (People’s Daily Online, April 17).

Earlier in the same week, People’s Liberation Army (PLA) Central Military Commission (CMC) Vice-Chairman Fan Changlong (范长龙) visited Fiery Cross Reef as part of a review of the island and infrastructure-building progress in the southern reaches of the South China Sea (Reference News Online, April 16; Global Times Online, April 18). The fact that the landing was publicized is meant as a message, likely for Washington policymakers, including U.S. Secretary of Defense Ash Carter who recently visited the region, as part of a tour that included meetings with U.S. allies and partners to which the U.S. is looking to help balance China’s growing power. China’s actions form an important addendum to the endless repetition of China’s position: due to historical reasons, it has absolute claim and sovereignty over a vast portion of the South China Sea. When articulated by Chinese diplomats, the historical record of what China has done in the area and how its current moves fit into the pattern of previous military deployments and modernization is blurred.

Recent moves such the deployment of surface-to-air missiles and combat aircraft to the Paracel Islands have been a continuous focus of media attention. However, it is important to note that China has been making such deployments (though at a much lower frequency) for over 30 years, and these form an important part of China’s signaling strategy.

Declassified U.S. intelligence assessments from as early as 1984 predicted that China could oust Vietnamese forces from islands closer to the Chinese mainland (such as Bach Long Vi, see map) via amphibious assault. The year 1983 also saw the introduction of tanks and armored vehicles into China’s then-nascent Marine force. Force now regularly practices joint landings (China Brief, August 4, 2015). China is rapidly addressing another deficiency noted 30 years ago by the intelligence assessment—a lack of ship-borne air defenses. [1] As noted in a recent article in China Brief, China is building and commissioning destroyers with advanced anti-air capabilities into the South Sea Fleet, as well as upgrading land-based mobile air defense systems on Hainan and Woody Island (China Brief, March 28).

According to the assessments, on November 8, 1980, Chinese bombers flew from over Northeast Cay (北子岛), part of the Spratlys, while Chinese fighters patrolled the Paracel Islands (see map). Similar demonstrations followed in October 1983 over Malaysian-occupied Swallow Reef, this latter exercised paired with a navy frigate and supply vessel. [2] At that time, such an operation would have been a “one-off” to demonstrate political will to Vietnam. China had no real ability to sustain combat operations at such a distance.

Chinese capabilities have improved enormously in the intervening three decades. Long-range bomber patrols through the Miayko Strait and into the Western Pacific are now routine (China.gov, November 27, 2015). The Chinese Air Force and Naval Aviation branch now possess advanced, long-range fighters (and even better Sukhoi jets are on the way). This means they are not limited—as they were in 1983—to patrolling closer to shore. When challenging U.S. surveillance aircraft in the South China Sea, they are fully armed with PL-7 and PL-12 air-to-air missiles, a statement in itself. [3] The recent appearance of Su-27 variants better suited to anti-shipping, air-to-ground, and electronic roles at Ledong/Folou airbase on Hainan Island further suggests that the days of the PLA Naval Aviation Force being limited to interception and air superiority roles may be at an end. [4] Indeed, in the beginning of April, eight fighters of the South Sea Fleet’s 9th Air Division participated in a drill practicing hitting “enemy” targets at sea (Chinese Navy Online, April 18).

Moreover, the “K” variant bombers it uses, while based on the same work-horse H-6 platform, are now capable of carrying up to six CJ-10 (长剑) anti-ship or ground-attack cruise missiles (QQ.com, January 7). Heavy-lift capability, a major deficit in China’s ability to deploy internally and abroad, also appears to be on its way to being resolved. China’s indigenous Y-20 aircraft—China’s answer to the U.S.’s C-17 and a vast improvement over its legacy Y-8 transport—is set to begin active production and reach operational capability in late 2016 (People’s Daily Online, February 27).

On the sea, 1983 was also an important year. The preceding year had seen China’s abandonment of Soviet Naval doctrine that emphasized coastal defense over more traditional ideas of sea control. This was then demonstrated when, for the first time, China dispatched two naval ships on a training mission to the Spratlys in May 1983. Fast forward to November of last year and China has abandoned another long-held precept, that it would never establish military bases overseas, when it set in motion agreements to operate a naval base in Djibouti (China Brief, January 25; MOD website, November 26, 2015).

Moreover, China’s ability to project naval power over long distances has increased dramatically. In the context of the South China Sea, this includes a series of newly commissioned amphibious transports, including four Type 071 Landing Port Docks (LPDs) (Global Times Online, December 28, 2015). These new capabilities represent a dramatic improvement over the PLA Navy of 30 years ago.

Diplomatically, China has left itself no room for negotiation, and made it abundantly clear that, as far as it is concerned, there is no need for negotiation or consultation about its territorial claims as there is no real dispute. This makes signaling by means other than official spokespeople (with narrowly defined scripts) even more important.

At the same time, China is still mastering the capabilities it would need to operate effectively should conflict break out. It can feel assured in its ability to defeat local neighbors in a conflict one-on-one, but the addition of the United States—or even a combination of neighbors—would dramatically alter the apparent military balance.

4. This airbase is noteworthy for the presence of a super-hardened hanger/underground facility on the southeastern side. (For reference: 18.678, 109.184). 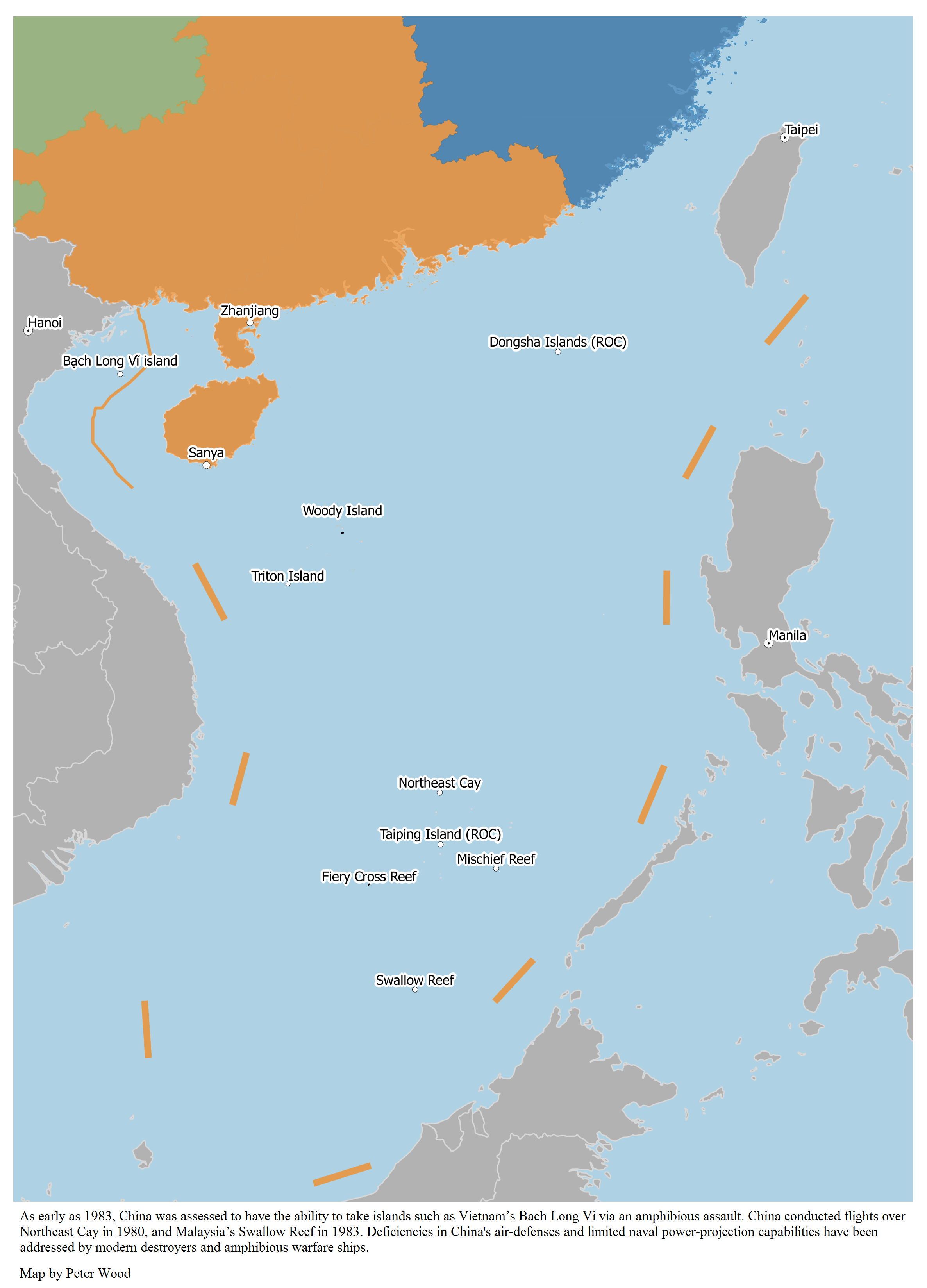 Back
The Influence of Russian Military Reform..Next
Pushback against Xi Jinping’s One-Upma..