Yana Amelina, a well-known Russian journalist in the Caucasus who heads the Caucasian Geopolitical Club, unexpectedly lashed out at Circassian activists for their attempts to “revive” the Circassian question. According to Amelina, the Circassian question was already “over” at the time of the 2014 Sochi Olympics, but recently, some in the United Kingdom, Georgia, and Turkey have tried to revitalize the Circassian movement. The expert scorned Circassian Flag Day, which Circassians celebrate at the end of April, denigrating it as an insignificant event. Russian experts like Amelina have increasingly used threats to convince Circassian activists to give up on their attempts to defend their interests. Once again, Amelina warned that Circassians should not rely on the UK and Turkey as allies, because they previously used them in a “futile war against Russia” and eventually abandoned them (Rusplt.ru, May 4).

Circassian activists have tried to attract the world’s attention to the plight of their people in the past years. The Russian empire used military force, famine and disease to expel the majority of the Circassian population from their homeland in the North Caucasus in the 19th century. About 90 percent of the Circassian population ended up outside their homeland. The Russian government, however, has refused to recognize its negative impact on the Circassian nation or to alleviate its consequences. Many Circassians campaigned against the Sochi Olympics, claiming that Sochi was the “land of genocide.” But Russia refused to recognize the conquest and ethnic cleansing of Circassians from the Black Sea coast as “genocide.” The Russian authorities did not even offer significant incentives for the Moscow loyalists among the Circassians. Moscow did not rescue the Syrian Circassians, which would have allowed it to pose as their savior and win over some Circassians.

Amelina quotes Circassian activist Andzor Kabard, who said Russia failed to use the repatriation of the Syrian Circassians, as a political tool to assuage Circassians and improve its reputation. According to Kabard, Russia thereby lost a major lever for influencing the Circassian community. Amelina dismisses Kabard’s efforts to organize Circassians worldwide via the Internet by distributing virtual “Circassian passports” and conducting a “census” among them. According to Amelina, Circassian leaders rejected the idea as “virtual and stillborn.” The expert also noticed the recent spike in activities of the Circassian cultural center in Tbilisi, Georgia. The head of that center, Merab Chukhua, reportedly received support from Circassians in Turkey and from Swedish academic circles (Rusplt.ru, May 4).

Irakly Gogoberidze, a pro-Russian writer who poses as a Georgian, warns that Georgia should abandon its efforts to support the Circassians or face a backlash from Russia. Gogoberidze claims foreign powers send “thousands of dollars” for “further incitement of ethnic hatred, and unleashing a new fratricidal war” (Worldandwe.com, May 5).

The new verbal attacks on Circassians come at a time when Circassian activists are fairly reticent about their further actions, although Circassian Flag Day and the Day of Remembrance usually take place in April–May. Meanwhile, the attacks on Circassians were not limited to verbal assaults. A well-known Circassian activist, Adnan Khuade, was sentenced to 15 days in detention for driving his car without a license. In addition, the road police, who are notorious throughout Russia for corruption, accused him of trying to bribe road police officers. Khuade is known for holding multiple protests demanding that Russia repatriate Circassians from war-torn Syria (Natpressru.info, May 6).

In March, unidentified individuals vandalized a Circassian monument in Nalchik, Kabardino-Balkaria, specifically dedicated to the memory of those who died during the Russian invasion of Circassian land in the 18th and 19th centuries. A Circassian activist, Astemir Shebzukhov, made a formal appeal to the authorities asking them to investigate the incident. However, the police, who usually handle such investigations, rejected Shebzukhov’s appeal (Natpressru.info, May 6).

Whether or not they were part of a campaign by Russian authorities remains to be seen, but the series of incidents and accusations by Russian experts against Circassian activists demonstrate that Moscow is worried not only about Circassians taking actions against the government but also about Circassians simply having their own days of remembrance and strengthening their identity. The Russian government at the highest level has said numerous times that it is determined to fight “falsifications of history.” Moscow regards all interpretations of history except those that are officially approved as “false.” The Circassians’ consistent narrative about their destruction by the Russian empire and subsequent exile poses a general challenge to the Russian government. Circassians have largely become aware of their history and rocky relations with Russians, and Moscow finds it hard to fight against that. The Russian authorities are thus nervous because they cannot force Circassians to forget what they learned. The Circassian question undermines the “correct” version of Russian history, which traditionally portrays territorial conquests by the Russian empire as benign for the people who were conquered. In many cases, Russian historians completely deny that these were conquests at all, referring to conquered areas as having “voluntarily joined Russia.” Circassians are now aware of having been both conquered and destroyed by Russia. This self-awareness concerns Russian experts and shows the limits of Russian state propaganda. 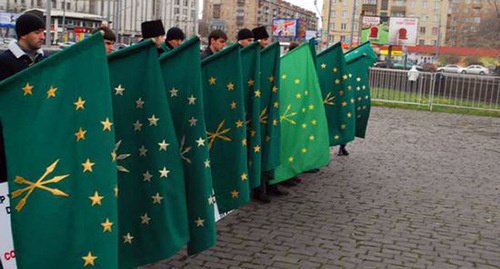 The Jamestown Foundation was proud to host a webinar on... END_OF_DOCUMENT_TOKEN_TO_BE_REPLACED

Jamestown Foundation Analyst Richard Arnold was interviewed by PolitiFact for a story on the Lie of the Year 2022, or Putin’s long list of lies... END_OF_DOCUMENT_TOKEN_TO_BE_REPLACED

As a full-fledged war between Ukrainian forces and Russian-backed irregulars rages on in Ukraine’s eastern region of Donbas, Western defense experts are only now beginning to thoroughly assess the military lessons of the Russia-Ukraine conflict. Meanwhile, the Russian military again looks poised to intervene in eastern Ukraine as it... END_OF_DOCUMENT_TOKEN_TO_BE_REPLACED