Tanks rumbled through Moscow over the past week before rolling across Red Square today (May 9) in the traditional, extravagant military parade marking Victory Day. Unlike in 2015 (which marked the round 70th anniversary of the end of World War II), there were no notable foreign guests in attendance at this year’s showcase of Russia’s military might. But as Russia’s economy sinks deeper into recession, the need to again put on a spectacular show has become even greater than last year. The propaganda campaign aimed at boosting “patriotic” feelings has reached new heights, but it is difficult to reliably gauge its effectiveness. Recycling past glory can produce only so much resonance in today’s population; so appropriating the Soviet Union’s heroic victory over Nazi Germany as a means to assert the legitimacy of the Vladimir Putin regime’s aggressive but ineffectual policies is growing a bit stale (Carnegie.ru, May 4). What distinguishes the celebrations this year is the propaganda message that Russia is again surrounded by malevolent enemies and only military might can deter their encroachments (Moscow Echo, May 7).

A great deal of false pretence underscores this glorification of militarism. Consequently, some authors argue that instead of revealing its shallowness, it could just be shrugged off as a modern form of carnival (Gazeta.ru, May 6). However, quite real risks are associated with this loudly declared commitment to rebuff all hostile manoeuvres. Russian officials are furiously protesting against the North Atlantic Treaty Organization’s (NATO) exercises in the Baltic states and promising far-reaching “countermeasures” (Newsru.com, May 4; Novaya Gazeta, May 3). Defense Minister Sergei Shoigu assures that the four NATO battalions that could be deployed in the Baltic theatre would face two new Russian divisions, while a third one will be stationed near the Donbas war zone (TASS, May 4). More protestations are issued about the small-scale exercise in Georgia, Noble Partner 2016, in which 650 troops from the United States 150 troops from the United Kingdom will train together with 500 Georgian soldiers. In Moscow’s opinion, this exercise amounts to a major “provocation” aimed at destabilizing the situation in the South Caucasus (Rbc.ru, May 6). It is remarkable that Russia is not staging any parallel exercises, but the urge to respond with guaranteed overkill is still dangerous.

Meanwhile, the military intervention in Syria is being offered as the prime showcase of Russia’s capacity for power projection. The reduction of its intensity to 20–25 sorties a day does not reduce the official triumphalism over this “small and successful” war (Rbc.ru, May 4). Each time US Secretary of State John Kerry calls Russian Foreign Minister Sergei Lavrov to negotiate another extension of the partial ceasefire, Moscow registers a new diplomatic victory (RIA Novosti, May 4). The political impression from the military victory was supposed to be reinforced by the performance of the Mariinsky orchestra in the ruins of the newly-liberated city of Palmyra (Moscow Echo, May 6). What spoiled that plan for adding a cultural touch to the bombing campaign was the air strike on a refugee camp in Northern Syria, which some are characterizing as a war crime (Kommersant, May 7). Russia prevented the United Nations Security Council from condemning that atrocity, once again illuminating Moscow’s apparent indifference to the humanitarian catastrophe of the Syrian civil war (Newsru.com, May 7).

The Palmyrian concert, in which Sergei Roldugin performed on the cello, has brought into focus one peculiar feature of the new Russian militarism: It is corrupt even at the highest level. Indeed, Roldugin is personally implicated in the transnational money-laundering schemes revealed in the “Panama Papers,” and President Putin had to take him under his supreme protection in order to make sure that no investigation could follow this money (Moscow Echo, May 6). Putin did order an investigation into another case of corruption on a stupendous scale: the construction of the Vostochny cosmodrome, which was supposed to symbolize Russia’s strategic “pivot” to the East but has instead come to exemplify a colossal waste of resources (Moscow Echo, May 5). Japanese Prime Minister Shinzō Abe assumes that, out of desperation over the failure of this “pivot,” Putin would not refuse an offer of economic cooperation in exchange for a compromise on the disputed South Kurile islands (Kommersant, May 7). However, Abe has failed to factor in the importance turning some Kremlin courtiers into stake-holders in this deal by granting them opportunities for enrichment. In this way, Russian “crony capitalism” would effectively erase the state’s strategic concerns (Rbc.ru, May 6).

The blossoming of corruption in a declining economy runs the risk of enraging the dispossessed—and Vostochny inspired several protest actions. Therefore, militarism is expected to deliver a patriotic unity to cover up such thievery. The celebration of Victory Day provides the perfect means for such mobilization, targeting any liberal dissent as “treachery” (Ezhednevny Zhurnal, May 6). Even a minor offense against the mainstream discourse, like sharing posts on social media that claim Crimea belongs to Ukraine, is now treated as a crime of “extremism” that can result in a sentence of two years in a penal colony (Slon.ru, May 6). The officially encouraged jingoism has inspired angry demands to ban an “unpatriotic” video clip posted online by the rock group Leningrad on April 30, which received millions of views in its first week (Moskovsky Komsomolets, May 6). The message of Leningrad’s provocative song—about the joy of acting on the urge to break free from a joyless life—apparently resonates deeper than the drums of state propaganda (Snob.ru, May 3).

As the tanks and missiles depart from Moscow, the paroxysm of self-glorification also dissipates, leaving behind the inevitable hangover and the “Now what?” question. Last year, the answer was ultimately found in launching the military intervention in Syria. But this time around, the escape from this adventure—even if it goes smoothly, which would take a lot of luck—needs to be outshined by a new “victory.” The options, however, are growing progressively limited as money begins to run out—while remaining in high demand by Russia’s corrupt state-owned enterprises and embezzlement networks. Putin cannot be sure that the forthcoming parliamentary elections, tightly managed as they are, might not unleash an avalanche of heretofore hidden mass discontent, as they did in late 2011. He has only a few weeks to invent a new cause to rally the masses in support of more of the same, but his subordinates seem to be out of ideas. 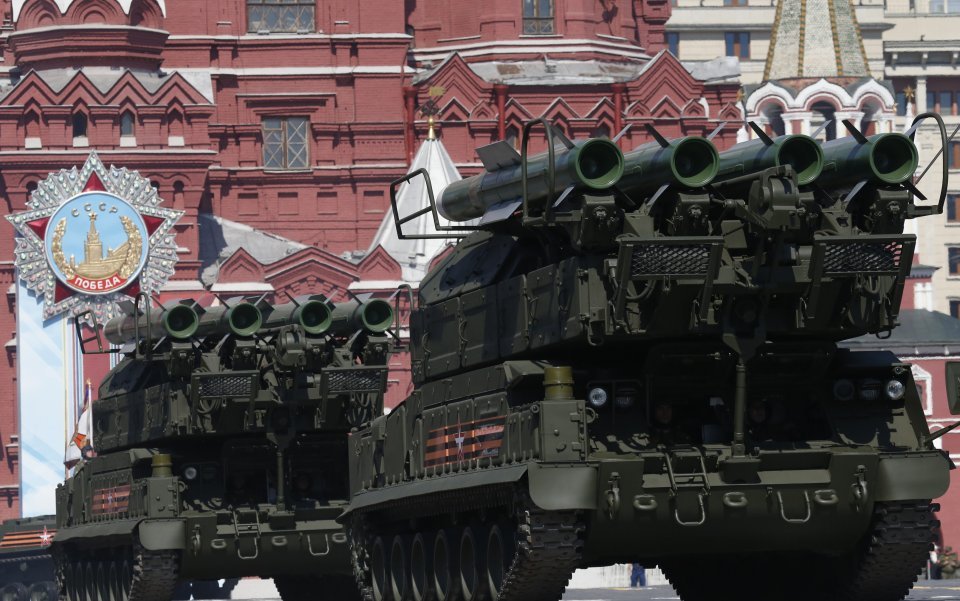 Back
Belarus Reforms Its Elections and Commem..Next
Circassian Activism Appears to Be Thorn ..

The Jamestown Foundation was proud to host a conference on... END_OF_DOCUMENT_TOKEN_TO_BE_REPLACED

On June 6, Jamestown’s President Glen E. Howard was quoted by Task and Purpose in an article on Russia’s Chechen fighters in Ukraine. END_OF_DOCUMENT_TOKEN_TO_BE_REPLACED