The idea of engaging in more dialogue with Russia is eagerly accepted by the North Atlantic Treaty Organization (NATO), is being pursued by the United States, is cultivated by the Chinese leadership, and has again become embraced by Turkish President Recep Tayyip Erdoğan. The latter even swallowed his pride and offered an elliptic apology for his country’s air force having shot down a Russian bomber that violated Turkish airspace from Syria last November. The Russian-Turkish quarrel was declared finished—to the surprise of many Russians (Kommersant, July 15). A day after the attempted military coup in Turkey (July 15–16), President Vladimir Putin expressed his support for Turkey, during a phone conversation with Erdogan. The two leaders are expected to meet face to face at the beginning of August (Anadolu Agency, July 17). Putin has good reasons to worry about the threat of a palace coup at home and has been furiously reshuffling the overgrown security services.

Meanwhile, US Secretary of State John Kerry traveled to Moscow last week (July 14–15) to sell a plan for closer bilateral coordination of military operations in Syria. Russian commentators did not miss the fact that the plan has many opponents in Washington, DC (Nezavisimaya Gazeta, July 15). Kerry’s meeting with Putin lasted three hours, and talks with Foreign Minister Sergei Lavrov went twice as long; yet the results were meager (RBC, July 15). Russia’s intervention in Syria is in trouble: the two limited airstrikes by six Tu-22M3 long-range bombers, on July 12, proved that the air force grouping deployed at the Hmeimym airbase near Latakia was stretched too thin to cope with the combat tasks in the multi-front civil war (Gazeta.ru, July 14). Kerry agreed with Russian demands to focus more on checking the offensive by the al-Nusrah Front but was not able to secure an agreement on halting the indiscriminate strikes by forces loyal to Syrian President Bashar al-Assad. Thus, the US Secretary of State had to admit that his suggestions “need more work in order to work” (Kommersant, July 15).

The Moscow talks once more reiterated the fact that Putin, Russia’s ultimate “decider,” habitually prefers not to commit. Nevertheless, his European colleagues had placed great emphasis on holding a meeting of the NATO-Russia Council on July 13, days after the North Atlantic Alliance’s summit in Warsaw (Russiancouncil.ru, July 14). The Alliance demonstrated unity in political pledges to build up defensive capabilities in the Baltic theater. However, many member states insisted on explaining yet again the non-threatening character of these measures (Moscow Echo, July 11). NATO Secretary General Jens Stoltenberg duly delivered the message about readiness to work on de-escalating military tensions, but the Russian response was predictably uncooperative (Novaya Gazeta, July 14). Ukraine continues to be the subject of profound disagreements, and Moscow’s denials of direct involvement in the daily exchanges of heavy fire in the Donbas war zone mean that no substantive exchanges on this crucial European security problem are possible (Ezhednevny Zhurnal, July 14). Ukrainian President Petro Poroshenko is another leader utterly frustrated with the prospects of the Minsk peace process, even if German Chancellor Angela Merkel insists that there is no alternative to this format of fruitless negotiations (Nezavisimoe Voennoe Obozrenie, July 8).

Irritation over Moscow’s self-serving ambiguity is also visibly growing in Beijing, despite their mutual habitual pledges of nurturing a trust-based strategic partnership. President Xi Jinping agreed to invest serious money in the Yamal liquefied natural gas (LNG) project, assuming this was of particular importance for Putin, who paid a shorter-than-usual visit to China last month (Carnegie.ru, June 27). In return, the Chinese side likely expected Russian support should the Permanent Court of Arbitration in The Hague return an unfavorable decision on China’s territorial dispute with the Philippines in the South China Sea (Nezavisimaya Gazeta, July 15). The verdict turned out to be even worse than Beijing had feared, but the Russian opinion was diplomatically strictly neutral (Kommersant, July 13). Rejecting the arbitration with extreme prejudice, China now feels obliged to increase its military “ownership” of various rocks and artificial islands—and it clearly believes it cannot count on support from its most important international partner (RBC, July 15).

What makes Russia’s behavior so frustrating for many dialogue partners is that it feels free to move back and forth between a “principled” stance and bazaar-style bargaining, as if it is in a position to decide the outcome of major international issues at will. China, which puts supreme priority on sustaining economic growth, is puzzled over Russia’s apparent complete disregard for its own deepening economic crisis—even though 77 percent of Russians understand the devastating situation their country is in (Levada.ru, July 13). The US leadership and its NATO allies, meanwhile, cannot logically connect Russian discourse on the primacy of international law with the fact of its breach of the key European norm of inviolability of borders created by the annexation of Crimea. And in Syria, it is quite hard for international stake-holders to reconcile Russia’s geopolitical ambitions with the growing discontent among Russian Muslim communities, which creates a pool of recruits for extremist Islamist networks (Carnegie.ru, July 6).

Problems in keeping meaningful conversations with Moscow going are caused by more than just miscommunication and lack of trust: they emerge from a profound confusion over the interplay between Russia’s foreign and domestic policies. The Russian leadership cannot afford to design a strategy for overcoming its maturing domestic economic crisis, since this would require implementing no-nonsense reforms. And so the government swings between denials of Russia’s decline and attempts to manage it. The latter inform the cautious policy of cutting wasteful expenditures, visible for instance in Moscow’s restrained response to NATO’s Anaconda 2016 military exercises or in curtailing its Syrian intervention; the former dictate more demonstrations of power. The problem with this combination of growing weakness and imagined strength is that the management of decline does not work. So when Putin tries to show careful statesmanship in the face of a sharp crisis, partners find it hard to believe him, knowing that he may simply be looking for an opportunity to score another victory by projecting military power on the cheap. Putin is almost certainly not a compulsive gambler, and he would much prefer to enjoy stable relations with key peers. But his street-smart instincts tell him that Russia is losing every regulated competition, so he feels compelled to continue breaking international rules and norms. His conversations with world leaders are merely a cover-up for this compulsion. 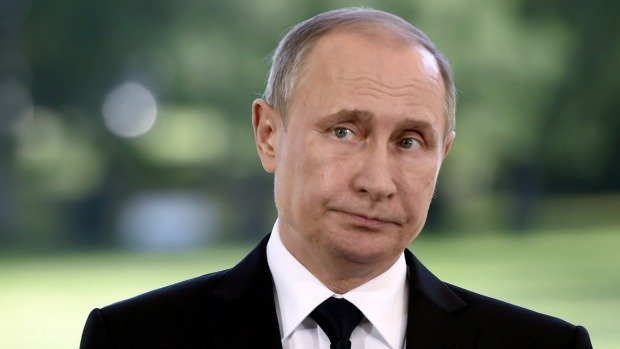 Back
Russian Security Services Target Muslim ..Next
Major Mudslide Forces Consideration of A..

The Jamestown Foundation was proud to host a webinar on... END_OF_DOCUMENT_TOKEN_TO_BE_REPLACED

Jamestown Foundation Analyst Richard Arnold was interviewed by PolitiFact for a story on the Lie of the Year 2022, or Putin’s long list of lies... END_OF_DOCUMENT_TOKEN_TO_BE_REPLACED

Given the recent “reset” policy put in place by the Obama administration with regards to Russia policy, a closer look into the Kremlin’s arm sales practices might prove critical for anyone attempting to decipher Moscow’s foreign policy ambitions.  In Shrinking Ground: Russia’s Decline in Global Arms Sales from The... END_OF_DOCUMENT_TOKEN_TO_BE_REPLACED