On June 23, the Terek River flooded and destroyed part of the Georgian Military Highway (Voyenno-Gruzinskaya doroga). The highway, which connects Russia to Georgia and Armenia, was closed. The flood caused mudslides and destroyed an estimated 500–600 meters of the highway, blocking the narrow road in the mountains on the Georgian side of the border. On July 5, the Georgian authorities finally opened a temporary route for all-wheel-drive passenger cars. A large group of Armenians stranded on the blocked highway sheltered in a temporary tent camp until a plane from the Russian Ministry for Emergency Situations evacuated them to Yerevan (Newsarmenia.am, July 4).

Although disruptions lasting two or more weeks are not a yearly phenomenon on the Georgian Military Highway, they do take place periodically. Shorter disruptions are common both in the winter, due to avalanches and major snowfalls, and at other times due to heavy rains and floods. Since the start of 2016, for example, the highway has been closed for approximately 50 days (Kavkazskaya Politika, July 4).

In the winter, the Georgian Military Highway is open only during the day, while in the summer it is open around the clock. On the Russians side, the highway is relatively easy to maintain, but the Georgian side has to take care of much rougher terrain in the mountains. Ironically, Russia is arguably more interested in maintaining the highway connecting it to Georgia than Georgia itself, because the highway is currently the only available land route between Russia and Armenia, its ally in the South Caucasus.

The Georgian Military Highway lies in the Darial gorge, located east of Mount Kazbek, one of the highest peaks in the Caucasus Mountains. The Darial gorge (in Persian, Dari-e Alan—the Gate of Alans) was known in ancient times as a major passage through the Great Caucasus Mountain Ridge, where the Terek River cuts through the mountains and flows to the Caspian Sea. After the Russian conquest of the Caucasus in the 19th century, Moscow invested significant resources in rebuilding and maintaining the highway, but it never became a safe, all-season transportation route. During the Soviet period, most cargo was carried via two other major overland passages cutting through the Caucasus Mountains from north to south—one along the Caspian Sea in the area of Derbent in southern Dagestan, the other along the Black Sea, in the area of Sochi and Adler. However, due to the Georgian-Abkhaz war in the 1990s, and the Armenian-Azerbaijani conflict, the alternative routes connecting Russia to the South Caucasus, especially to Armenia, are no longer usable.

Following another major blockage of the Georgian Military Highway in June, Russian, Georgian and Armenian experts resumed debate about alternative routes connecting Russia to the South Caucasus. One of the alternative routes suggested by Russian experts is the Trans-Caucasus Highway (Transkam) that runs via South Ossetia. Although Transkam also runs high in the mountains and shares many of the Military-Georgian Highway’s downsides, Transkam is safer and has fewer interruptions. However, opening the route via South Ossetia has quite a few obstacles. From the Georgian standpoint, such a move could legitimize the breakaway Georgian region of South Ossetia and provide resources to the cash-strapped republic. From the South Ossetian standpoint, opening the route between Georgia and Russia could diminish its importance as Russia’s ally in the South Caucasus. Finally, even from the Russian perspective, opening transit via South Ossetia may not be a desirable move since it would decrease South Ossetia’s profound economic dependence on Moscow (Kavkazskaya Politika, July 4).

Three other alternatives have been put forward by various forces. The first is to restore the old Military-Sukhumi Highway, which ran across the mountains from Karachaevo-Cherkessia to Abkhazia, but was shut down by the Soviet authorities after the Second World War. Neither the Abkhaz nor the Russians seem interested in restoring the highway, even though it would be an important transportation route for Karachaevo-Cherkessia and other North Caucasian republics. Abkhazia’s de-facto authorities also are not interested in putting the railway that used to connect Georgia to Russia via Sochi/Adler back in operation. The second proposal is to restore the Avaro-Kakhetian highway that ran from the mountains of Dagestan to Georgia. Some work has been done on the Dagestani side, but Georgia does not appear particularly interested in the project. The third proposal is to build a highway from Chechnya’s Itum-Kale district to Georgia, which also received little recognition in Georgia. Chechen head Ramzan Kadyrov’s emissaries reportedly visited Tbilisi to lobby for the construction of the highway, but the results of their trip remain unclear (Kavkazskaya Politika, July 4).

On the Georgian side, there is a general wariness about opening more transportation routes that would allow Russia to have greater access to its territory. Following the five-day war between Russia and Georgia in August 2008, Russia officially recognized the breakaway Georgian regions of Abkhazia and South Ossetia. Georgia responded by severing diplomatic relations with Russia. The movement on the Georgian Military Highway was restored only in 2010, and even then many Georgia experts feared it was a security hazard for the country (Rosbalt.ru, January 5, 2010).

Moscow’s position on the transportation routes across the Great Caucasus Ridge is also far from straightforward. For example, there are no regularly scheduled flights from North Caucasian airports to Tbilisi. Even at the Upper Lars checkpoint, the Georgian side can handle 270–300 trucks a day during normal operation times, while the Russian side restricts that number to 50 (Kavkazskaya Politika, July 4).

What seem to be technical restrictions are likely to be political ones in disguise, suggesting that Moscow is reluctant to allow the unrestricted movement of people, especially from the North Caucasus to Georgia. Restricting connections between the North and South Caucasus was certainly Moscow’s policy at the height of the Chechen secessionist movement. At the same time, North Caucasian regional governments—particularly those in Karachaevo-Cherkessia, Kabardino-Balkaria, Chechnya and Dagestan—appear quite eager to try to establish transportation links with the South Caucasus. Tensions in the region, however, seem to be forestalling any attempts to make significant strides in the direction of greater connectivity across the Caucasus Mountains. 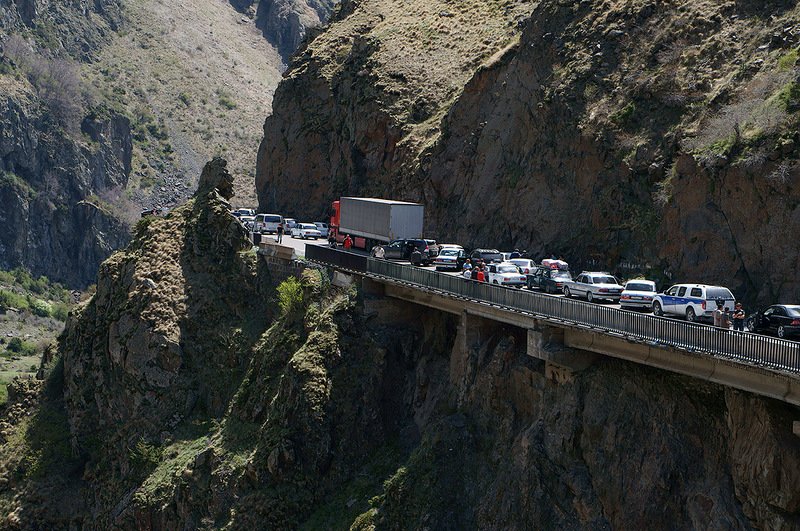 The Jamestown Foundation was proud to host a webinar on... END_OF_DOCUMENT_TOKEN_TO_BE_REPLACED

Jamestown Foundation Analyst Richard Arnold was interviewed by PolitiFact for a story on the Lie of the Year 2022, or Putin’s long list of lies... END_OF_DOCUMENT_TOKEN_TO_BE_REPLACED

The October 2021 issue of Militant Leadership Monitor features a piece on the affirmed death of jihadist Mokhtar Belmokhtar and his legacy of spreading influence of al-Qaeda in the Islamic Maghreb (AQIM) throughout the Sahel; the leadership of Mullah Muhammad Hassan Akhund as the inaugurated Prime Minister of the... END_OF_DOCUMENT_TOKEN_TO_BE_REPLACED