Insurgency-related violence in the North Caucasus has substantially decreased over the past year. According to the Kavkazsky Uzel website, the number of deaths declined by 39 percent and the number of those injured were 73 percent lower in 2015 than in 2014. The number of terrorist attacks decreased by 33 percent, while the number of explosions dropped by 45 percent (Kavkazsky Uzel, February 10).

Despite the Russian government’s apparent success in the North Caucasus, some experts warn that the decrease in violence there could be temporary. An expert on the region, Irina Starodubrovskaya, told the Dagestani weekly newspaper Novoe Delo that the authorities’ recent attempts to ramp up pressure on Dagestan’s Salafist community might soon backfire. She said that the Salafists, who only followed a different strand of Islam but did not engage in acts of violence, could turn violent if the authorities continue closing down their mosques, listing them as disloyal subjects, and exerting other forms of pressure. Starodubrovskaya said that the authorities sent a “very strange signal” to the Salafist community when they shut down the mosque in Khasavyurt and then, in response to the Salafists’ mass mobilization, returned the mosque back to them. Such a signal means that the state is prepared to recognize only force but is not ready for a regular dialogue. The other source of danger comes from the Middle East, according to Starodubrovskaya. She said that after Russia launched its military campaign in Syria, some Muslim leaders urged the Muslims in the North Caucasian to fight in their region rather than go to the Middle East. It is still unclear whether the North Caucasian radicals will challenge the Russian state in their own region, but it is possible (Novoe Delo, March 19).

Russian experts overwhelmingly play down the importance of political factors in the radicalization of Muslims and the rise of religion in general. Starodubrovskaya, along with other researchers, blame social trends, like the outflow of Dagestanis from villages to the cities in the 1990s and the breakdown of so-called traditional values and their replacement with new ones, for radicalizing North Caucasians (Onkavkaz.com, March 22). Either out of conviction or out of fear, Russian experts prefer not to address the impact that the rigid political system built by Vladimir Putin may have on the radicalization of people in the region. When the citizens of Dagestan cannot elect their representatives, influence the authorities through legal means or engage in business activities because of corruption, then they tend to become radicalized, and this should come as no surprise to anyone. Whether their radicalization takes a religious or some other form is of secondary importance. Trying to solve the problem of radicalization without addressing the related political factors is unlikely to lead to solutions.

On March 25, reports surfaced that parishioners of another Salafist mosque had been detained en masse. Before Friday prayers, police reportedly surrounded the mosque on Vengerskikh Boitsov Street in Dagestan’s capital Makhachkala, where an estimated 4,000 Muslims gather every week. The police selectively detained the parishioners and put them on a special list as potential troublemakers. The police, however, did not confirm such detentions had occurred (Kavkazsky Uzel, March 25).

Meanwhile, Dagestan’s outspoken governor, Ramazan Abdulatipov, held a government meeting in the republic’s Untsukul district on March 25. The village of Gimry, which is notorious for its protracted insurgency activities, is part of that district. At the meeting, Abdulatipov said that about 70 young people from the district are fighting in Syria and that the district authorities should erect a “Board of Shame” in each of the villages and place photographs of the insurgents on them. The local authorities said that they had managed to convince 52 rebels to return to civilian life in 2015. Dagestan’s minister for youth and sports affairs, Arsen Gajiev, reassured Abdulatipov that “92 percent of the district’s youth support the government policies toward the Islamic State.” The head of the government committee for ties with religious organizations, Magomed Abdurakhmanov, said that his committee, along with the republican mufti, “certified the imams of the all 15 Juma-mosques (main mosques) in the districts to assure their position on terrorism” (Kavkazsky Uzel, March 26).

The conditions for radicalization in Dagestan, along with the other republics of the North Caucasus, have not disappeared. Instead of solving the problems of radicalization by increasing political inclusion or by expanding economic opportunities and political pluralism, the Russian authorities have used brute force to suppress dissent. However, it appears that dissent has not disappeared, but simply taken on different forms. 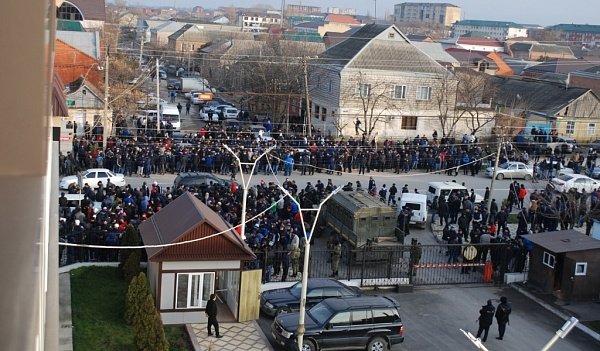 Back
New Momentum in the Russia-China Partner..Next
Freedom Day and Belarus’s Ongoing Ques..

The Jamestown Foundation was proud to host a webinar on... END_OF_DOCUMENT_TOKEN_TO_BE_REPLACED

Jamestown Foundation Analyst Richard Arnold was interviewed by PolitiFact for a story on the Lie of the Year 2022, or Putin’s long list of lies... END_OF_DOCUMENT_TOKEN_TO_BE_REPLACED