Giorgi Vashadze, a high-ranking member of Georgia’s formerly ruling United National Movement (UNM) and a member of the Georgian parliament, left his political party on May 5. Immediately, he unleashed harsh criticism for the organization to which he had pledged his allegiance for more than a decade. As Vashadze stated, UNM has adopted a “closed system of governance,” in which a small group of high-ranking party members ruled the organization according to their personal interests. He pointed to specific names: Giga Bokeria, a former secretary of national security; David Bakradze, a former speaker of the parliament; Mikheil Machavariani, a former parliamentary vice speaker; Giorgi Gabashvili, a high-ranking member of parliament (MP); and Khatuna Gogorishvili, another high-ranking MP. Vashadze declared that he would form a new political movement to attract a new generation of Georgian politicians (Civil Georgia, Interpressnews.ge, May 5).

Vashadze is not the first, and most likely will not be the last political figure to have left the struggling UNM party. Soon after UNM lost the October 2012 parliamentary elections, its majoritarian MPs began to defect to the ruling Georgian Dream (GD) coalition (Ick.ge, February 5, 2013). Others broke away and formed their own party (Sazogadoeba.ge, May 25; Interpressnews.ge, November 5; see EDM, December 8, 2015) or just left Georgian politics altogether (Tabula.ge, November 11, 2015).

The fact that UNM is falling apart, is nothing new in Georgian politics. Once ruling parties lose power in Georgia, their rank-and-file members lose any incentive to stay within the party. Hence, they switch sides, causing a rapid disintegration of their organization. The same happened to two previous ruling parties since Georgia gained its independence from the Soviet Union. The question, however, is why UNM has been unable to reform and reinvent itself in order to survive. The answer lies in several factors.

First, the party’s leader in absentia, former president Mikhail Saakashvili, left the country for Ukraine, where he currently serves as the governor of Odessa region. This created a huge power vacuum in the party, subsequently leading to a power struggle between his group and that of Bokeria and Ugulava, the former mayor of Tbilisi (Uarevo, News.ge, December 3, 2015; see EDM, December 8, 2015). The return of Saakashvili to Georgia, in order to unite his party, does not seem feasible at this time, as he would face criminal charges by the GD authorities for alleged abuses of power during his rule.

Second, UNM has struggled to attract new political cadres or “new faces” to at least create the impression of political renewal within the organization. Just recently, UNM tried to address this problem in the run up to the fall 2016 parliamentary election. On May 16, UNM unveiled a new proportional party list of MP candidates for the upcoming elections. However, if the party wanted to showcase a slate of new cadres, it utterly failed to do so. Ultimately, there is nothing new about those names. Most of them are seen by the wider Georgian public as long-time UNM members and affiliates. For instance, David Bakradze, heading the list, served as the speaker of the UNM-dominated Georgian parliament in 2008–2012. Roman Gotsiridze was a president of the National Bank of Georgia in 2005–2007, and an economic adviser to President Mikhail Saakashvili. Elene Khoshtaria was a deputy state minister of European and Euro-Atlantic integration under UNM. Moreover, Nika Melia was UNM’s candidate in the 2014 local elections for the mayor of Tbilisi. He lost to the ruling Georgian Dream (GD) candidate. Others on the list served in various bureaucratic positions while being UNM members or were and appointed by the party (Civil Georgia, May 16).

Subsequently, UNM’s recent alleged attempt at renewal quickly drew ridicule from some in Georgia, calling its new proportional party list a sham (Info9.ge, May 17). As a result, UNM has once again illustrated that it does not have new political cadres to put forth, that it cannot truly change its image, and that it is unable to deliver new electoral victories. Even more so, the party seems unable or unwilling (or may even be intimidated) to bring new political cadres from outside the organization in order to revamp itself.

Another problem for the party is that it never satisfactorily addressed the charges of UNM’s alleged misuse of power, human rights violations, and corruption that were leveled by its political opponents and the wider public. This armed the party’s multiple adversaries with additional ammunition to attack UNM as an unrepentant political force (Interpressnews.ge, September 1, 2013). And in part, UNM’s attitude has contributed to its falling popular support. According to the latest polls, UNM currently enjoys 18 percent public support, coming in second place after the ruling GD’s 19 percent (Iri.org, March–April 2016). UNM often emphasizes that it is the second-most popular party in the country. However, these polls only reflect how discredited UNM’s brand has apparently become in the eyes of the electorate. The political party that ruled the country for nine years fails to garner more than 18 percent of popular support even against the background of a highly unpopular government that presides over mass poverty, unemployment and a stagnant economy.

Clearly, UNM is suffering from significant problems. The absence of its leader, infighting within the party, a lack of new political cadres, the inability to meaningfully address the alleged mistakes of the party’s nine-year rule, and a lack of popular support will affect the party in the short and long run. Considering all of these problems, the prospects of UNM’s electoral success, let alone of an outright victory in the upcoming 2016 election, look bleak at best. 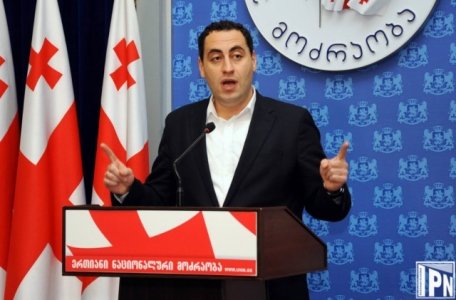