Since the start of the Syrian war in 2011, Central Asians have featured prominently among the anti-government militants. But until June 2016, as far as Central Asia was concerned, the impact of the war was contained almost entirely to Syria and Iraq and remote parts of eastern Afghanistan, where the Islamic State’s (IS) Syria-based leadership announced a new “Khurasan” Province in 2015. However, the June 28 attacks at Istanbul’s Ataturk Airport by an IS cell that reportedly included an Uzbek, a Kyrgyz and a Chechen, as well as the June 5 attacks on government buildings in Aktobe, Kazakhstan, by IS-influenced religious extremists, signify that the Central Asian militancy appears to be extending beyond Syria (Hurriyet Daily News, July 1; YouTube, June 5; see EDM, June 21).

The state of the Central Asian militancy now is vastly different than at the start of the Syrian war, when the only major Central Asian militant groups were the Islamic Movement of Uzbekistan (IMU) and the Turkistan Islamic Party (TIP). Both were based in the Afghanistan-Pakistan border region, and only the latter was capable of mounting, at best, sporadic attacks in its homeland: Xinjiang, China.

The first Central Asian militants to arrive in Syria were not closely affiliated with the IMU or the TIP, but they became part and parcel of al-Qaeda’s Syrian affiliate Jabhat al-Nusra (YouTube, April 18, 2013; Now.mmedia.me, August 12, 2012). After the split between Jabhat al-Nusra and the Islamic State in 2014, Central Asians established their own groups among the al-Nusra-led coalition in northwestern Syria now called Jaysh al-Fateh (Army of Conquest). These include two Uzbek groups—the Imam Bukhari Brigade (IBB) and Katibat Tavhid wol Jihod (KTJ)—as well as one Uighur group, the TIP’s Syrian Branch.

Now, the TIP Syrian Branch, the IBB and KTJ are as strong as they ever were. From April to June 2016, the TIP released two videos showing its fighters taking over the al-Manusrah Grain Silos and the town of Khirbat Nuqas, in Hama (Siddiqlarbiz, April 23, 25). Later, the IBB posted on its website an operation called the “conquest of Marata,” a town near Aleppo, with fighters alongside KTJ militants (Buhoriy.com, June 6). Meanwhile, KTJ showed a video of the same battle and its leader, Abu Saloh, calling for attacks against “Shia infidels from Iran, Iraq, Afghanistan and Lebanon, who are led by Russia” (Tavihvajihod.com, June 5).

These three Central Asian militant groups are not only increasing their involvement in the al-Qaeda network on the battlefield, but also in the propaganda space. Perhaps the most prominent Central Asian militant leader is the TIP’s Abdul Haq al-Turkistani. Although he was reported to have been killed by a US airstrike in Pakistan, in 2010, he convincingly resurfaced in a video in May 2016, in which he praised al-Qaeda ideologues such as Abdullah Muhyasini, condemned the IMU for making the “wrong decision” to pledge allegiance to the Islamic State (which led the Taliban to decimate the IMU in Afghanistan), and urged the TIP to “take advantage of hot conditions of jihad” in Syria to prepare for jihad in Xinjiang (Dawn, March 1, 2010; Doguturkistanbulteni.com, May 28).

Moreover, from their bases in Syria, the TIP Syria Branch, KTJ and the IBB have also remained loyal to the Taliban and al-Qaeda. The IBB opened up a Khurasan branch in northern Afghanistan in early 2016, which could coordinate with the Uzbeks who helped the Taliban take over Kunduz in September 2015 (Dawn, September 30, 2015; Buxoriy.com, April 25). A small faction of the IMU that claims it did not pledge allegiance to the Islamic State has also reaffirmed its loyalty to al-Qaeda, suggesting that the “old guard” of militants in the IMU and the “new guard,” including the IBB, KTJ and the Syrian-based TIP, could link up to operate in northern Afghanistan in the future.

On the Islamic State side, Kazakhs, Uighurs and Tajiks feature prominently in its propaganda, such as “martyrdom” statements and occasional Central Asia–focused videos (Twitter, @abo_m_207, June 17 [account since suspended]). However, in contrast to al-Qaeda, the IS does not allow for “nationalistic” factions, so all Central Asian militants must be subsumed under the IS banner. Thus, there have been no specifically Central Asian factions in the Islamic State, and it is more difficult to assess the strength of Central Asian in the group compared to Jaysh al-Fateh.

Yet, clearly, while the al-Qaeda-aligned Central Asian militant groups are plotting their next steps in Syria and Afghanistan, the Islamic State is becoming weaker in those two theaters. The IS is therefore looking to carry out attacks outside of the Middle East to distract from the reality of struggles within the “Caliphate.” Central Asians will not be the only nationalities used in attacks abroad; but as far as Turkey is concerned, it makes sense for the IS to deploy them wherever they can blend in, as occurred with the cell that carried out the Istanbul airport attack.

The high number of Central Asians with the IS in Syria and Iraq also means they can send videos and other propaganda materials to their compatriots at home, in an effort to at the least inspire attacks. This seemed to have been the case with the Aktobe attacks, where a radicalized religious society (“jamaat”) had, according to Kazakhstani analysts, received videos from the IS in Syria in the weeks before the attacks (365info.kz, June 6). Although Kazakhstan’s economy is the most advanced in Central Asia, it still may be the most vulnerable to attack in the region. The country is in a recession; western cities such as Aktobe pale in prosperity compared to Almaty and Astana and are historically closer to the Caucasus and Tatarstan, where Salafist influences are strongest. Moreover, the country’s relative openness in online and offline communications, compared to China or Uzbekistan, makes it an “easier” target for IS information operations.

For the short term, the Central Asian militants under al-Qaeda will likely stay focused on Syria and, to a lesser extent, Afghanistan. But with the Islamic State losing territory in Syria and Iraq, the militant group may deploy expendable, but reliable, Central Asians to operate abroad, especially in Turkey where they can easily integrate linguistically. The IS will likely also encourage followers and sleeper cells in Central Asia to carry out attacks, although such cells are currently too disparate, lack media capabilities, and are disconnected from the IS leadership. 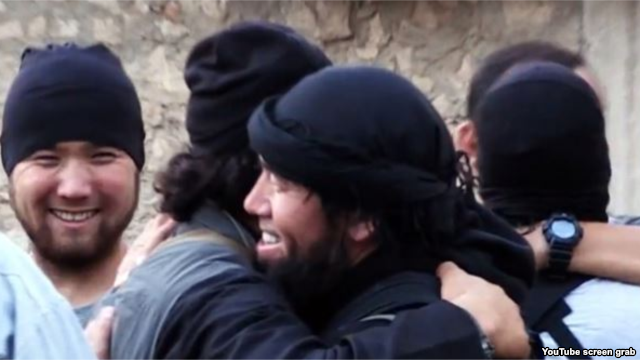