Russian views of the Shanghai Cooperation Organization (SCO) were prominently on display at the grouping’s most recent summit, in Tashkent, which took place on June 23–24. Specifically, President Vladimir Putin had extravagant words of praise for the SCO—a regional institution bringing together Russia, China, Kazakhstan, Kyrgyzstan, Tajikistan and Uzbekistan, along with the newest entrants, India and Pakistan, which were admitted at the summit (see EDM, June 29). In an interview with the Chinese press, Putin stated that although the SCO has not achieved any astonishing progress, it is a highly demanded, powerful and attractive regional organization. Furthermore, he confirmed that India and Pakistan would officially join the organization as full members in 2017 (Kremlin.ru, June 23). Russia also supports Iran’s membership in the SCO, he noted (Tasnim News Agency, February 3; Press TV of India, June 24).

Yet, despite this fulsome praise, the Tashkent Summit offered no clues as to how the SCO intends to fight Islamist terrorism. In fact, none of the preceding summits have ever resulted in any concrete steps toward a concerted regional effort against terrorism—either directly through the SCO or, on a less institutionalized basis, among its members. Neither did the June 2016 summit conclude with an acceptance of Iranian membership, as Moscow wanted. Instead, the SCO countries decided, a month in advance of the high-level Tashkent meeting, to study Iran’s request for membership after India and Pakistan join next year (Tasmin News Agency, May 25). This outcome implies that Russia’s ability to sway other members to its preferred outcome may be less compelling than advertised. Notably, the Central Asian leaders from Kazakhstan, Kyrgyzstan and Tajikistan only spoke of SCO enlargement in neutral terms and did not mention Iran at all, suggesting much less support for admitting Tehran (President.kg, June 28; President.tj, President.uz. June 24).

Russian experts like Timofei Bordachev, the program director for Eurasia at the Valdai Club, argues that recent SCO summit offered Russia and China a great opportunity to work out the modalities of multilateral cooperation in Central Asia (Valdaiclub.com, June 22). But in reality, China has historically used SCO summits to make bilateral deals with Central Asian states, and Tashkent was no exception. Indeed, if anything, the organization has allowed China to further consolidate its economic and political domination of Tajikistan (EurasiaNet, June 24).

So regardless of Putin’s and Bordachev’s encomia to the SCO, this grouping once again appears to be less than the sum of all of its parts. Clearly, the organization provides a forum for Eurasian states to engage with China’s ambitious economic and infrastructure plans for the region. But the SCO’s actual role in combating terrorism and promoting regional security—two of its supposed foundational purposes—remains unclear. In fact, that has been the case since it was formed and as it expands. According to experts like former US Deputy Assistant Secretary of State Evan Feigenbaum, a growing SCO is likely to become self-marginalizing because it will be too large to act decisively. Like in the case of other Asian security organizations, its function will follow its form (VOA—Uzbek service, June 27). Wary of this fact, Kazakhstan’s President Nursultan Nazarbayev had himself warned that the SCO should not be allowed to become “an amorphous, bureaucratic, and paper organization” (Vlast.kz, June 23).

Putin’s hollow praise notwithstanding, the SCO is, indeed, increasingly becoming an amorphous, bureaucratic, paper organization, where Russian influence is more and more limited but in which China’s scope for maneuver grows. This, clearly, is antithetical to how the regional grouping was supposed to function. But the Kremlin appears to have been blinded as to what is really happening within the SCO and Central Asia due to Russia’s increasing dependence on China. Illustratively, China’s bailout of key Russian energy sectors as well as sweetheart business deals with various Russian elites (see EDM, March 30) underscore the ideological-political importance of this bilateral relationship to Moscow. Moreover, Beijing’s periodic requests to Moscow to support it in world affairs implicitly confirm the Russian Federation’s status as great power even as China continues to gain growing leverage over Russian economics and politics.

For the time being, Russia will continue to claim military guardianship over the Central Asian region. But it is clearly reluctant to commit its forces to active missions there—even when it demonstrates the capability to do so, as it has done in exercises in the past (see EDM, October 22, 2015; June 15, 2016). Indeed, by the time Russia is actually forced to act in the region—either through the Moscow-led Collective Security Treaty Organization (CSTO) or via the SCO—it may be operating not so much out of its own self-interest, but as the de facto gendarme of China. 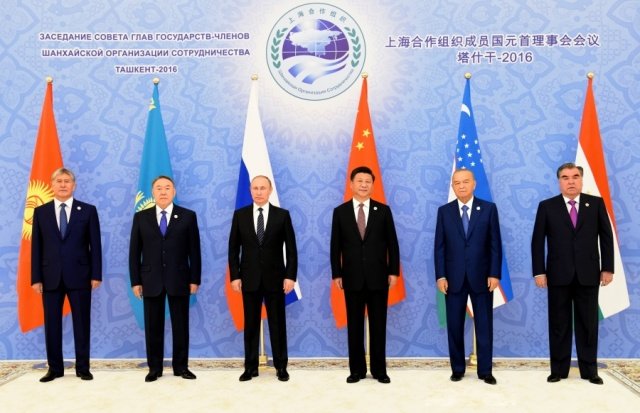