On April 2, a conflict erupted between Dagestanis and Kalmyks in Kalmykia’s capital Elista. A Dagestani wrestler, Said Osmanov, who was on a visit to Kalmykia reportedly went inside a Buddhist temple, urinated, and kicked the face of a Buddha statue. Moreover, Osmanov posted the corresponding images online. Meanwhile, Elista residents found out about the wrestler’s behavior, and a crowd of indignant locals came to the hotel where Osmanov was staying. The protesters reportedly forced him to kneel down and beg for forgiveness. The police later took him in for questioning in order to avoid further disturbances. The wrestling tournament was canceled following the incident (Lenta.ru, April 3).

Osmanov’s father reportedly said that he was shocked by what his son did in Kalmykia (Kalmykia-online.ru, April 4). The head of Dagestan’s government, Abdusamad Gamidov, traveled to Kalmykia to apologize to its people (Kalmykia-online.ru, April 3). A court in Elista ordered the 22-year-old Osmanov to be placed under arrest for two months. The suspect may face up to three years in prison for the charges brought against him. Moreover, Dagestani authorities barred Osmanov from wrestling, dismissed his coach, and issued a warning to Dagestan’s sports minister Magomed Magomedov. The governor of Kalmykia, Aleksei Orlov, stated that he personally spoke to Dagestan’s governor, Ramazan Abdulatipov, about the incident. Orlov declared: “We are united in this; we condemn this act of vandalism and agree on the main thing that the moral and spiritual freaks who commit such unlawful acts have no nationality” (Vlasti.net, April 4).

While the Dagestanis largely condemned the actions of Said Osmanov, the public mood started to change when the authorities announced that the perpetrator of vandalism was facing an actual prison term. Moreover, according to some eyewitness accounts, Osmanov did not go to a Buddhist temple and did not mock the Buddha statue. The Dagestani visitors to Kalmykia alleged that the police sided with the Kalmyk mob and did not even try to protect them from the rioters (Novoe Delo, April 9).

Several Dagestani politicians issued statements calling for restraint to avoid a larger scale conflict between Dagestan and Kalmykia. Dagestani politicians quickly transitioned from their initial apologetic attitude to demanding equitable treatment of both sides of the conflict—the Dagestanis and the Kalmyks. The divide between the Buddhist Kalmyks and the Muslim Dagestanis quickly became one of the hot topics on social media in both republics (Onkavkaz.com, April 9).

Kalmykia is a sparsely populated republic to the north from Dagestan. About 280,000 people reside in a largely arid territory of 76,000 square kilometers. By comparison, the population of Dagestan is about three million, living in an area of about 50,000 square kilometers. Ethnic Kalmyks comprise about 57 percent of Kalmykia’s population, with ethnic Russians the second largest group, comprising about 30 percent of the population. A plurality of Kalmyks is Tibetan Buddhist, although some practice Russian Orthodox Christianity and Shamanism.

The Dagestani academic Khabib Magomedov told the Kavkazskaya Politika website that Osmanov may have been “inspired” by Muslim attacks on historical sites abroad. “I guess he remembered media reports that somewhere in Afghanistan the Taliban blew up monuments of Buddha, which had been around for several thousand years,” he said. “Then he thought that he was no worse than the Taliban and decided to show off his hero side by insulting the statue. Then he was even smart enough to publish the video on the Internet. As a result, we get a strong blow to Dagestani identity.” However, Magomedov said that Dagestanis should not insult others but also should not allow others to insult them. In particular, Magomedov was unhappy with the Dagestani government official who sounded as if he apologized for the entire Dagestani people instead of apologizing for one concrete individual. More importantly, Magomedov pointed out that the Kalmyks had attacked and burned mosques in their republic. In some instances, the mob attacked and beat up Dagestanis but no one apparently apologized to the Dagestanis for that, and Kalmykia’s government did not seem to be concerned about such cases (Kavkazskaya Politika, April 7).

Indeed, in July 2014, a group of masked men attacked and burned down a Muslim prayer house in Elista. The prayer house was the only official building in Kalmykia designated for the prayer needs of Muslims of the republic. The majority of Kalmykia’s population is non-Muslim, but Muslims comprise around 40,000 people, about 13 percent of the republic’s population (Newsru.com, July 3, 2014). The Muslim population of Kalmykia is increasing, which probably unnerves some among its non-Muslim majority. Kalmykia borders northern Dagestan, and most Muslims in the republic have connections with Dagestan.

Relations between the two communities have become quite tense, and the authorities’ attempts to pretend that only one side of the conflict is to blame for all issues seems to be backfiring. Even such experts as Khabib Magomedov, who specializes in fighting extremism among Dagestan’s Muslims, says that the state should protect the rights of all its citizens equally in order to avoid the spread of extremist ideas by the Islamic State. 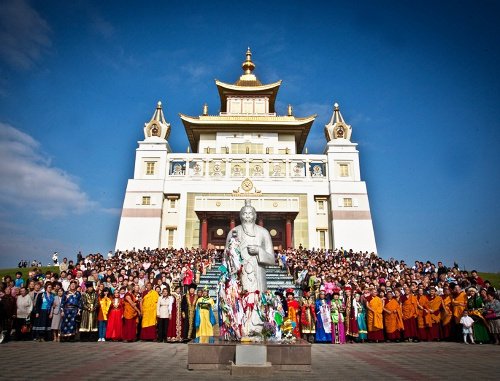 The Jamestown Foundation was proud to host a webinar on... END_OF_DOCUMENT_TOKEN_TO_BE_REPLACED

Jamestown Foundation Analyst Richard Arnold was interviewed by PolitiFact for a story on the Lie of the Year 2022, or Putin’s long list of lies... END_OF_DOCUMENT_TOKEN_TO_BE_REPLACED

In Conflict Zones, Janusz Bugajski enhances our understanding of the causes and consequences of the current conflicts in the North Caucasus and extrapolates likely scenarios in the region’s development. He compares and contrasts conditions in the North Caucasus with the former Yugoslav federation in the Western Balkans, a multi-ethnic... END_OF_DOCUMENT_TOKEN_TO_BE_REPLACED