On April 5, President Vladimir Putin ordered the creation of a new National Guard, marking a sweeping transformation in Russia’s security structures (see EDM, April 7, 11). Intermittently discussed since the 1990s, the reform of these structures was long overdue and clearly tasked with improving domestic security capabilities. But the National Guard’s roots lie in Moscow’s wider efforts against color revolution as one of the most formidable challenges facing the Russian state. The actual reform appears based on structural analyses of similar bodies in the former Soviet Union, while the twin aims of countering color revolution and terrorism denote the context in which Putin adopted the radical measure; however, the process is the culmination of several years of intensive internal assessment and discussion in relation to Russia’s strategic challenges (Vedomosti, April 11; RBK, April 5).

Forming the National Guard with unprecedented powers and its potential turf conflict with the Federal Security Service (Federal’naya Sluzhba Bezopasnosti—FSB) over counter-terrorism is consistent with statements, interviews and public discussion among the political-security leadership and in line with the country’s recently revised national security documents. Though some observers see this as a response to fears in the Kremlin over mass protests challenging the regime, the counter–color revolution strategy, which lies at its heart, now links foreign and domestic threat assessments as part of a seamless web (Kremlin.ru, April 5).

According to the ukaz (presidential order) signed by Putin on April 5, the new power structure will report directly to the president. Its manpower will be based on the Ministry of Interior’s (MVD) Internal Troops (Vnutrenniye Voiska Ministerstvo Vnutrennikh Del—VVMVD, 170,000), MVD specialist riot police (Otryad Mobilny Osobogo Naznacheniya—OMON), special purpose mobility units (Spetsial’nye Otryady Bystrogo Reagirovaniya—SOBR, Special Rapid Reaction Units, 30,000), as well as the police’s private security department (Vnevedomstvennaya Okhrana—MVD FGUP, 200,000) (Vesti, April 6). This provides a total manpower of up to 400,000, which will include contract and conscript personnel. The change also shifts the Federal Drugs Control Service (FSKN) and Federal Migration Service (FMS) to the MVD, though retaining their responsibilities as separate services (Vesti, Parlamentskaya Gazeta, April 6; Moskovskiy Komsomolets, April 5).

Putin bypassed Interior Minister Vladimir Kolokoltsev and appointed the chief of the MVD Interior Troops and former head of the presidential security service, Army-General Viktor Zolotov, as commander-in-chief of the National Guard, which will also have six deputies. Zolotov is a long-serving member of team Putin. The two men have maintained close relations since their time in St. Petersburg in the 1990s. Zolotov will surely play a central role in quashing any future domestic instability or crisis (Nezavisimoye Voyennoye Obozreniye, April 8; Gazeta.ru, April 6; RIA Novosti, April 5).

Putin’s decree on the National Guard makes clear that it will have considerable power within the state to carry out its duties with military personnel and assets, including its own aviation and special forces. The National Guard will “participate jointly” in protecting public order and public security during a state of emergency; combatting and assisting in the fight against extremism; territorially defending Russia; protecting state facilities and special cargoes; assisting the FSB in border security; and overseeing observance of legislation in relation to private security companies (Vzglyad, April 6; Kremlin, April 5).

The origins of the new National Guard structure grew out of internal crises and power plays among key actors in the 1990s. The deep collective memory of the collapse of the Soviet Union, in 1991, has cross pollinated with domestic security perspectives on color revolution, especially close to Russia’s borders. The Russian elites have watched numerous such cases in recent years: revolutions in Ukraine, Georgia and Kyrgyzstan; governmental collapse and regime change in the Middle East; the chaos that followed the Arab Spring; along with, most recently, the EuroMaidan Revolution, which culminated with then-president Viktor Yanukovych fleeing Ukraine in February 2014 (see EDM, March 8).

While these foreign revolutions were key factors in Russian security analysis of the threat environment, the fact that in certain circumstances a color revolution could be viewed as a threat to Russia’s security was espoused clearly by the country’s leading military theorist, Army-General (retired) Makhmut Gareev, in Voyenno Promyshlennyy Kuryer, in December 2013 (Voyenno Promyshlennyy Kuryer, December 4, 2013). Internally, the catalyst was provided by the winter 2011–spring 2012 Bolotnaya Square protests over the falsified Duma elections as well as the FSB’s subsequent successful counter-actions (Vedomosti, April 6). The forthcoming election cycle in Russia supplies some context for the timing of the implementation of the reform, but the underlying drivers preceded it: the need to counter color revolution at home and abroad is embedded deep in Russia’s security documents and logically now shapes the formation of structures to act against such potential threats to the state (Kremlin.ru, December 31, 2015; December 26, 2014).

Putin’s creation of the new National Guard represents an internal security reform of a magnitude that eclipses the reform of Russia’s Armed Forces. To argue that it was caused by Kremlin paranoia over the forthcoming parliamentary and presidential elections is to miscast it and risk missing its real relevance. The reform adds no additional structures to the system, but moves existing structures to create a new overall entity with increased powers to act against color revolutionary or terrorist threats to the state; it is an effort to enhance efficiency and avoid duplication of responsibilities within the system, though it adds operational-search capability (Regnum, April 11).

The MVD lost in this reform, as has Kolokoltsev. The new structure with up to 400,000 personnel under arms will be capable, during a national emergency, of acting as an internal army without recourse to any other power ministry. It is unclear how the counter-terrorist dynamics will play out since this is traditionally the FSB’s responsibility. Equally, given Putin’s background, it is highly unlikely that he would implement a reform to engender internecine feuding between the FSB and National Guard (RBK, April 8). Forming a National Guard with such clear tasking also arguably lessens the pressure on the Armed Forces to intervene or become embroiled in a domestic political emergency. With the General Staff playing a pivotal role in dissecting the elements of color revolution and formulating prophylactic strategy against the phenomenon, Putin’s decision will come as no surprise. Thus, prospects for color revolution undermining the existing or future Russian regime may well be reduced as a result of the creation of the National Guard. 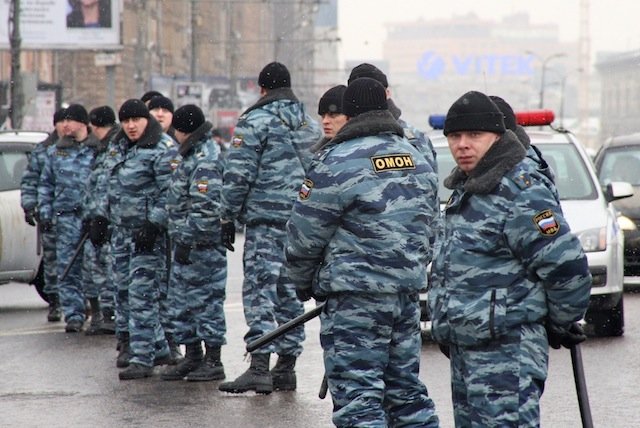 The Jamestown Foundation was proud to host a webinar on... END_OF_DOCUMENT_TOKEN_TO_BE_REPLACED

Jamestown Foundation Analyst Richard Arnold was interviewed by PolitiFact for a story on the Lie of the Year 2022, or Putin’s long list of lies... END_OF_DOCUMENT_TOKEN_TO_BE_REPLACED

The October 2022 issue of Militant Leadership Monitor starts off with a brief on the Iranian generals and defense officials responsible for supplying drones to the Russian army to use against Ukraine. Afterward, it gives a profile of the Boko Haram conspirator and newspaper editor Tukur Mamu, who was... END_OF_DOCUMENT_TOKEN_TO_BE_REPLACED