On July 13, in the capital city of Astana, Kazakhstan hosted a meeting of the foreign ministers of the five Caspian littoral states. The officials gathered to discuss a draft convention on the legal status of the Caspian Sea and other issues related to multilateral cooperation in the region (APA, July 13). Such negotiations have now gone on for nearly two decades, but have yet to produce a solution agreeable to all five states. This time, all the parties once more endorsed the importance of a negotiated delineation of the Caspian, and they agreed to hold the fifth meeting of the heads of states in Astana next year. However, Kazakhstani Foreign Minister Erlan Idrissov stated that there are still important issues to be agreed upon before talking about the possibility of signing a convention on the legal status of the Caspian Sea (Novosti.az, July 13).

This failure to agree on the legal status of the Caspian is notoriously accompanied by competing naval buildups in this energy-rich, inland body of water. Russia’s Caspian Flotilla, the largest navy in the sea and the only one deploying frigate-sized vessels (Gepard-class Tataristan and Dagestan), received 13 new combat and support ships just in the last two years. Most notably, among them were three Buyan-M-class missile boats and a modern Serna-class landing craft (TASS, February 19). The Flotilla will receive another seven warships by 2020 (Warfiles.ru, February 20).

Turkmenistan, a latecomer, which only recently established its Navy as an independent branch of the Armed Forces, took delivery of two Molniya-class missile corvettes armed with Uran-E missiles from Russia in 2011 (Natsionalnaya Oborona via EurasiaNet, June 5, 2012). In 2011–2012, Turkmenistan received two Tuzla-class patrol boats from Turkey (Newscentralasia.net, October 12, 2015). By June 2016, Turkmenistan managed to assemble three small attack craft manufactured by Turkey’s Dearsan; its inventory will increase to six by 2017 (Turkishnavy.net, May 13, 2011; Janes.com, July 1, 2016).

Iran possesses one of the numerically largest fleets in the Caspian Sea, though a majority of the ships are small-size vessels. The country deployed its largest and most heavily armed ship—the domestically produced Mowj-class Damavand (Jamaran-2) guided-missile destroyer (close to a corvette by international standards) in 2013 (RT, March 18, 2013). Iran is building a new Fateh-class submarine in Bandar-e Anzali, the country’s major Caspian port. With its 500-ton displacement, this is not a big submarine by global standards, but it will give Iran a notable edge in the Caspian (Fars, November 27, 2013).

Azerbaijan did not make any major investments into its naval development until the late 2000s, as the war with Armenia, which occupies Karabakh and seven adjacent Azerbaijani regions, made the development of ground and air forces a priority for Baku. In 2010, Azerbaijan reached a $75 million agreement with Russia to purchase Uran-E missile systems—delivered in 2013 (APA, October 15, 2013). Another $1.6 billion arms purchase deal was signed with Israel in 2012, which included the delivery of Gabriel-5 advanced anti-ship missiles (News.az, March 29, 2012).

Along with imports, Azerbaijan is developing the capacity for domestic assembly/production of naval vessels. The first two locally assembled ships were demonstrated in 2014, during the opening ceremony of the Coast Guard Shipyard and Repair Center (Trend.az, July 18, 2014). According to Israeli sources, these ships were Shaldag Mk V–class fast attack craft (FAC), acquired as a part of the Azerbaijani-Israeli deal on the purchase of six Shaldag Mk V FACs and six Saar 62 offshore patrol vessels (OPV) (Haaretz, September 1, 2014).

While a rapid naval buildup is under way in the Caspian Sea, it cannot be called a fully-fledged arms race. Rearmament efforts in the Caspian were first initiated and are currently led by Russia. But there are several reasons that this may not necessarily trigger an open arms race. First, Russia has historically been a leading naval power and there has always been a sizeable gap between its capabilities and those of the other littoral states. Second, no Caspian country, save for Russia, has sizable offensive capabilities in the sea. Rather, the platforms and weapons systems the other countries are acquiring reflect the perceived need to counter the threat of possible terrorist attacks on energy infrastructure, to protect coastlines and commercial vessels, to combat sturgeon poaching, as well as to manage other emergencies. Third, despite certain disagreements over maritime borders, all the littoral states currently enjoy cooperative relations, even in matters related to the security of the Caspian Sea. Not surprisingly, in the fourth Caspian summit in Astrakhan (Russia), in 2014, all five states unilaterally supported the unacceptability of any military presence of non-Caspian states in the Caspian Sea (Newtimes.az, October 27, 2014; see EDM, October 10, 2014). Their naval ships frequently make friendly visits to each other’s ports and take part in joint drills and naval games such as the annual “Caspian Sea Cup.”

To date, no regional state ever raised any concerns about the other’s military buildup in the Caspian. Even when the Russian Caspian Flotilla fired cruise missiles at Islamic State targets in late 2015, the other littoral countries stayed mum over this military deployment. Thus, despite some media speculation, there is no open arms race in the Caspian Sea and the expansion of regional navies is not yet being perceived as a zero-sum game. 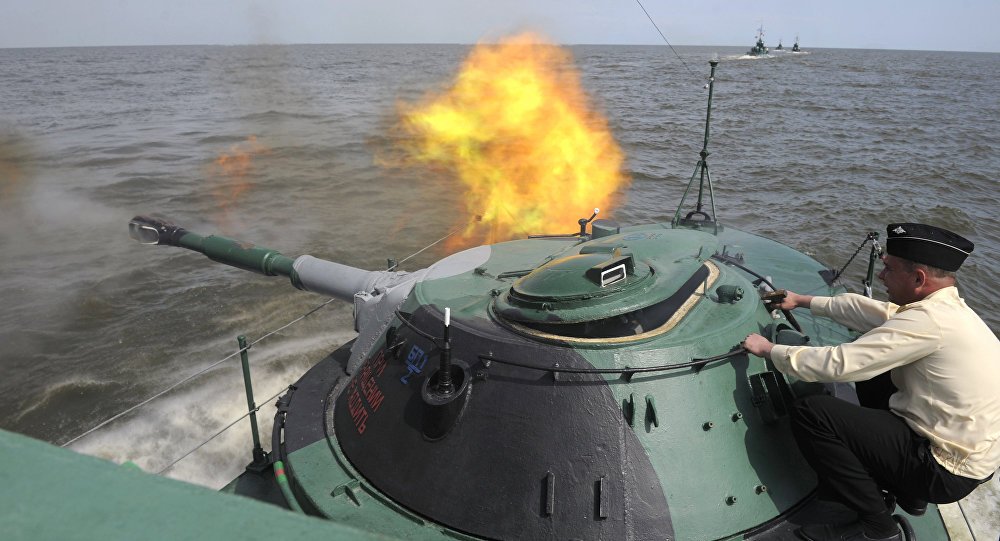 Back
Circassians Divided Over Turkish Coup At..Next
From Syria With Love—Colonel-General A..

On August 4, the Jamestown Foundation held a webinar  on... END_OF_DOCUMENT_TOKEN_TO_BE_REPLACED

Jamestown Senior Fellow Margarita Assenova was featured in an event with the New Lines Institute for Strategy and Policy on Capitol Hill. The event was... END_OF_DOCUMENT_TOKEN_TO_BE_REPLACED

The January 2016 issue of Militant Leadership Monitor begins with briefs about Turkmen Iraqi leader, Arshad al-Salehi, and a Libyan military commander by the name of Salam Jadallah al-Ubaidi. The first profile in the issue describes the significance of Abu Wardah Santoso in the uptick of Islamic State violence... END_OF_DOCUMENT_TOKEN_TO_BE_REPLACED