In 1990, Circassian activists designated May 21 as the Day of Mourning and Remembrance to commemorate the final destruction of their nation in 1864 by the Russian Empire. Since then, Circassians in the North Caucasus and outside Russia have marked the Day of Mourning with processions and cultural events; the Russian Federation’s authorities have largely ignored these commemorations. This year, however, the Russians started pressuring Circassians in regard to the May 21 anniversary, with a level of intensity and effort unlike previous years.

On May 21, police in Moscow detained the Circassian activist Beslan Teuvazhev and eight of his associates. According to the activists, they were near a metro station in Moscow when police arrived and took them to the police station. Teuvazhev and a group of Circassian activists had earlier asked the city authorities for permission to hold a public event at Sokolniki Park, in Moscow, on May 21, to mark the Day of Mourning. The city administration denied the request, saying that another organization had been given permission to hold an event in Sokolniki Park that day. When Teuvazhev asked the city to allow Circassians to hold the event on May 22, authorities again refused to grant them permission (Kavkazsky Uzel, May 21).

On May 20, Russian authorities denied entry to a group of 21 Circassians from Turkey who attempted to cross the Georgian-Russian land border. After a 20-hour delay, the authorities turned them back at the border. The group had traveled by bus from Ankara, Turkey, crossed the Black Sea by ferry to Batumi, Georgia, and planned to continue on the same bus to Nalchik, Kabardino-Balkaria. Members of the group planned to be in Nalchik on May 21 for Circassian Memorial Day, but the Russian authorities apparently did not approve of their participation in the public events in Kabardino-Balkaria (Justicefornorthcaucasus.info, May 20).

Khauti Sokhrokov, a well-known pro-Moscow Circassian who heads the International Circassian Association, approved of the actions of the Russian authorities. Sokhrokov said he had warned the Circassian organizations in the North Caucasus that due to the tensions between Russia and Turkey, they should not invite any foreign participants (Natpressru.info, May 20). The Circassian delegation from Turkey represented the KAFFED association, which repeatedly sent delegations to the North Caucasus in the past without much trouble (Natpressru.info, May 22).

Even more notably this year, the Ministry of Interior of Jordan, for the first time in years, banned Circassian protests in front of the Russian Embassy in Amman. Jordanian Circassians every year reportedly hold a relatively small event involving about 200–300 persons in the Jordanian capital. Locals are convinced that the Jordanian government acted under pressure from Russia. Still, Circassian activists reportedly managed to hold a demonstration in front of the Russian Embassy despite the ban (Natpressru.info, May 21).

Turkey has the world’s largest Circassian population, and sizeable commemorations of the Day of Mourning were held there on May 21 (Kavkazsky Uzel, May 21). Turkish Foreign Ministry spokesman Tanju Bilgic stated, on May 20, that the exile of the Circassians remains a “deep heart wound” and “a catastrophe” that will be remembered by all the Caucasian people. The Turkish official described the mid-19th century destruction of the Circassians by Russia as one of the deadliest mass killings in history, saying that hundreds of thousands of Caucasian people had been persecuted and faced annihilation when Russia invaded the Caucasus, forcing survivors to migrate to Anatolia, in the Ottoman Empire (Aa.com.tr, May 20).

An estimated 90 percent of the Circassian population in the North Caucasus and the Black Sea region was killed, starved to death or forced to leave their homeland as a result of the Russian conquest of the area in the 19th century. The Russian Empire sought control over the Black Sea coast and straits, which would allow it to expand its influence further to the south and to Europe.

This May 21, processions and other commemorative events took place in Kabardino-Balkaria, Karachaevo-Cherkessia, and Adygea, as usual. Those events were dominated by regional administrators, who emphasized the unity of all peoples in their respective republics. An estimated 1,500–2,000 people took part in the events in Maikop, Adygea. After the procession, the authorities allowed those mourning the day to enter a concert hall in Maikop, apparently to reduce the number of participants and take people off the streets (Natpressru.info, May 21).

In Kabardino-Balkaria, a large procession took place in Nalchik, along with events on a smaller scale in other towns of the republic. This year, the public events were reportedly marked with a large presence of police in Nalchik (Kavkazsky Uzel, May 21). At a commemorative event in Karachaevo-Cherkessia, the republic’s governor, Rashid Temrezov, said that a memorial dedicated to the victims of the Russian-Caucasian war would be ready by the fall of 2016 (Kavkazsky Uzel, May 21).

Commemorations of the victims of the Russian-Circassian war in the North Caucasus are not a threat to Moscow. Such events are usually dominated by the regional authorities, who do not say anything controversial that could upset the federal authorities. Yet, despite all this, authorities in Moscow are apparently increasing pressure on Circassians both inside and outside Russia in order to diminish the scope of Circassian Memorial Day commemorations and eventually halt them altogether. While the commemorations are themselves no threat to Moscow, any public event in the North Caucasus brings people together and shows there is a potential for collective action. Acting preventively, Moscow intends to disrupt the Circassian networks now in order to avoid any political demands from them in the future. 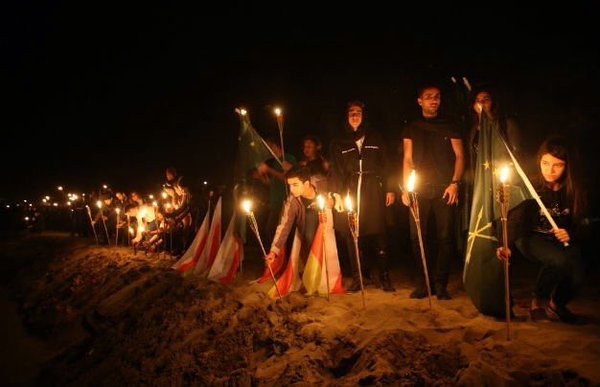 Back
The Futility of Dialogue With PutinNext
Four-Day Karabakh War Highlights Threats..

The Jamestown Foundation was proud to host a webinar on... END_OF_DOCUMENT_TOKEN_TO_BE_REPLACED

Jamestown Foundation Analyst Richard Arnold was interviewed by PolitiFact for a story on the Lie of the Year 2022, or Putin’s long list of lies... END_OF_DOCUMENT_TOKEN_TO_BE_REPLACED

The April issue of Militant Leadership Monitor begins with a profile of Maysar Ali Al-Jabouri, a Jabhat al-Nusra amir who is encouraging the split between al-Nusra and ISIS in Syria. This is followed with the next brief covering the connection between anti-balaka militias and Patrice Edouard Ngaissona in the Central African Republic. Zainul Abid provides a... END_OF_DOCUMENT_TOKEN_TO_BE_REPLACED