The OSCE’s year-end conference, which opened on December 4 in Brussels, foundered again as it has every year since 2001 on the main unresolved European security problem: Russian forces in Georgia and Moldova and the related status of the treaty on Conventional Forces in Europe (CFE).

While these issues have become perennial, this year-end meeting’s failure differs from the preceding ones in three respects: First, it loomed during the preparatory stage and was consummated already on the first day of the conference (not in the final day’s frantic final hours as had been the case in past years). Second, the organization’s Belgian Chairmanship distanced itself from the NATO and EU positions on those issues to accommodate Russia, only to fall between the Euro-Atlantic and the Russian stools. And third, some delegations spoke with unusual frankness about Russia’s unlawful conduct and the OSCE’s incapacity as a European security actor.

Ahead of the conference, the Belgian Chairmanship had drafted a final declaration largely overlooking Russia’s non-fulfillment of the 1999 OSCE Istanbul Commitments to withdraw its forces from Moldova and Georgia. The document’s terms came close to breaking the linkage between Russian troop withdrawal and Western ratification of the 1999-adapted CFE treaty — a linkage that constitutes NATO and EU policy (see EDM, November 27). At the same time, Russia ruled out the traditional year-end “regional documents” such as those on post-Soviet conflicts, unless the documents would fully satisfy Moscow.

Opening the conference as chairman-in-office, Belgian Minister of Foreign Affairs Karel de Gucht tried to preempt criticism on those counts. It is ”pointless and deeply harmful” to criticize the OSCE for failing to resolve conflicts, he maintained, because the organization cannot substitute for the interested parties in settling those 15-year-old conflicts. De Gucht appealed to those [unnamed] parties to resume the interrupted negotiations with the argument, “Their future as well as the future of our organization is at stake.” His comments reflected the organization’s focus on negotiating indefinitely as a goal in itself and its reluctance to hold Russia responsible for the deadlock in three conflicts.

By contrast, Czech Minister of Foreign Affairs Alexander Vondra observed, “Public opinion in many countries has long associated the OSCE with fruitless attempts at conflict resolution in Moldova and Georgia. Certain worrisome developments have further reduced confidence in the existing negotiation and peacekeeping formats and good faith of some of the parties involved in them.”

In a similar vein, Estonian Minister of Foreign Affairs Urmas Paet admonished, “The OSCE can not turn a blind eye to the actions undertaken by Russia against neighboring Georgia for the mere reason that the latter has opted for a Euro-Atlantic future. Unilateral sanctions and blockades are anachronistic tools. We should build confidence and support reforms in a Georgia whole and free. The OSCE’s credibility is also at stake in Moldova. The presence of foreign troops, without the consent of the host country, is a major source of instability. We need to respond to Moldovan calls for a truly international peacekeeping operation, especially as the existing setup only serves to stall a resolution of the conflict. Failure to resolve the ‘frozen conflicts’ is seriously undermining the OSCE’s credibility.”

Slovak Minister of Foreign Affairs Jan Kubis, a former Secretary-General of the OSCE, suggested deferring to the EU as a security actor: “Regrettably, the overall atmosphere and developments in conflict areas are generally not encouraging. We must again question the effectiveness of the existing OSCE mechanisms and approaches. Perhaps we should further strengthen the role and engagements of the EU.”

On the European Union’s collective behalf, the Finnish Presidency cautioned Russia, “The complete fulfillment of the 1999 Istanbul Commitments on Georgia and Moldova, remains essential. We note with regret the continuing lack of progress on the withdrawal of Russian forces from Moldova and call upon Russia to resume and complete its withdrawal.” The EU called for a comprehensive settlement involving political, economic, and security aspects, “including the transformation of the peacekeeping operation.” One weak point in the EU position is indecision about the proper sequence: deployment of its peacekeepers (largely civilian) is a prerequisite to a viable settlement

In tune with the EU, non-member Norway also told the conference that Moldova and Georgia have the right to develop without foreign troops on their territories and the right to choose Europe without interference from outside.

As had been the case at some previous year-end conferences (Maastricht 2003, Sofia 2004), Russia overplayed its hand and missed its chance to capitalize on the chairmanship’s draft final declaration. That document unilaterally redefined Russia’s Istanbul Commitments, particularly on Moldova, in a minimalist way almost to the point of erasing them: It omitted withdrawal of troops, called for a mere start to withdrawal of ammunition, indirectly allowed even that to depend on Tiraspol’s “permission,” and omitted as well the vexing issue of the Russian unaccounted-for treaty-limited equipment. With “fulfillment” of the Istanbul Commitments thus whittled down beyond recognition, the draft held out the prospect of ratification of the adapted CFE Treaty.

However, on the eve of the conference, Russia’s Ministry of Foreign Affairs announced that it would not tolerate in the final documents any reference to the “so-called” Istanbul Commitments or any linkage between that and the adapted CFE treaty’s ratification. “We will not accept any such text,” chief spokesman Mikhail Kamynin warned (Interfax, December 1, 4), frustrating the chairmanship’s hopes to end up with a final ministerial declaration at this conference. 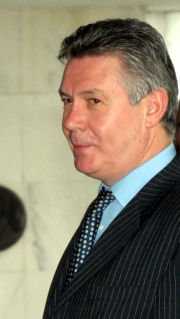 The Jamestown Foundation is pleased to host a forthcoming webinar... END_OF_DOCUMENT_TOKEN_TO_BE_REPLACED

The May 2019 issue of Militant Leadership Monitor features an extended brief on Zahran Hashim, the mastermind of the Sri Lankan Easter Sunday attacks; a profile of Iran’s high value target in Europe, Habib Jaber al-Ka’abi; an analysis of Shafi Muhammad Burfat, an advocate for Sindhi independence from Pakistan;... END_OF_DOCUMENT_TOKEN_TO_BE_REPLACED