Conventional wisdom in the West seems to have coalesced around the notion that the CIA’s airborne assassination campaign against al-Qaeda and the Taliban in Pakistan’s remote FATA (Federally Administered Tribal Areas) is driving Pakistanis to new levels of anti-Americanism. Western news sources report routinely on Pakistani discontent with the strikes. In truth, Pakistani leaders have spoken against them, the Pakistani media regularly condemns them and they do seem to be genuinely unpopular with Pakistanis according to opinion surveys. [1] But not everyone in Pakistan is against the killing of al-Qaeda and Taliban fighters by the CIA’s robotic killers in the sky. Recent accounts from the Pakistani media and blogs show that an increasing number of Pakistanis have turned against al-Qaeda and the Taliban and many have come to see the Predator and Reaper strikes on al-Qaeda as a legitimate response to terrorism (see Terrorism Monitor, September 25, 2009; October 1, 2009).

In April 2009, Pakistani security expert Amir Mir published figures which showed that 687 civilians have been killed along with 14 al-Qaeda leaders by American drones since January 2008 (The News, April 10, 2009). The newspaper reported that this translated to over 50 civilians killed for every slain al-Qaeda member. In January 2010, another Pakistani daily described an increased death toll for the year 2009 and claimed, “Of the 44 Predator strikes carried out by U.S. drones in the tribal areas of Pakistan over the past 12 months, only five were able to hit their actual targets, killing five key al-Qaeda and Taliban leaders, but at the cost of over 700 innocent civilians… for each al-Qaeda and Taliban terrorist killed by the American drones, 140 civilian Pakistanis also had to die” (Dawn, January 2). While such statistics of 50 or 140 civilians per al-Qaeda death are unproven (neither the Pakistani media nor the military can get to the remote, Taliban-controlled areas to do assessments on drone strikes on hujra guest houses, compounds, convoys or madrassas), these numbers have widespread currency among Pakistanis who are prone to anti-Americanism. An October 2009 report by Peter Bergen paints a lower number, giving a total of 760 to 1,000 deaths (including Taliban and civilians) over the three years from 2006 to 2009. [2].

Pakistani government officials have officially condemned the drone attacks in an effort to distance themselves from the unpopular strikes which are covertly supported by the Pakistani military and government.  The Pakistani Defense Minister claimed the strikes were generating “anti-American sentiments” and creating “outrage and uproar among the people.” Another military official said the missile strikes were “counterproductive” and “driving a wedge between the government and the tribal people.” Pakistani Prime Minister Yusuf Gilani complained, “We are trying to separate militants from tribesmen, but the drone attacks are doing exactly the opposite” (PakTribune, November 16, 2009).

For all their efforts to distance themselves from the unpopular drone strikes, it was revealed in 2009 that the Pakistani government actually permits the CIA’s Predators to be flown from Pakistani soil. When this news was leaked one Pakistani blogger wrote, “Now the cat is out of the bag… it is once more proved how much regard America and our own government has for the people who reside in Pakistan. Their lives are of no value and our own government is involved in the killings. What a shame and what a sorry state of affairs. Another lie of our president has been caught and nobody knows how many more are on the way.” [3]

But not everyone shares the above sentiment. In the spring of 2009 a poll was carried out in the FATA tribal area by the Pakistani-based Aryana Institute for Regional Research and Advocacy that was to demonstrate that in this area at least there was widespread support for the drone attacks (The News [Islamabad], March 5, 2009).  [4] The pollsters found that “the popular notion outside the Pakhtun [Pashtun] belt that a large majority of the local population supports the Taliban movement lacks substance.” Most importantly the study rejected the notion that the drone strikes are seen as a violation of Pashtun lands or Pakistani sovereignty. It would seem that Pashtun tribesmen who have seen their maliks (tribal chiefs) killed by the Taliban, their theaters closed, their women forced out of work, Islamic law brutally enforced, girls’ schools closed, and “spies, traitors and informers” killed in their hundreds by the Taliban are more inclined to be tolerant of the “machays” or “bangana” (“wasps” or “thunder,” as the drones are known in Pashtun) than Pakistanis living outside of the FATA zone.

In December 2009, a coalition of FATA-based political parties and civil organizations opposed to terrorism issued the “Peshawar Declaration.” Among other provisions, it stated:

• The conference demands that targeted and immediate operations against all centers and networks of terrorism should be initiated.
• This conference also demands the elimination of all foreign, non-local and local terrorists in FATA.

The declaration also dealt with the drone attacks in detail:

The issue of Drone attacks is the most important one. If the people of the war-affected areas are satisfied with any counter-militancy strategy, it is the Drone attacks which they support the most. According to the people of Waziristan, Drones have never killed any civilian. Even some people in Waziristan compare Drones with Ababels (The holy swallows sent by God to avenge Abraham, the intended conqueror of the Khana Kaaba). A component of the Pakistani media, some retired generals, a few journalists/analysts and pro-Taliban political parties never tire in their baseless propaganda against Drone attacks. [5]

Tellingly, when a CIA drone killed Baitullah Mahsud, the notorious head of the Pakistani Taliban who had sent numerous suicide bombers into Pakistani cities, there was no public outcry in Pakistan. On the contrary, many Pakistanis celebrated. One internet forum member from Karachi said, “If (his death is) true, it would be good news and shows the value of drone attacks,” while another claimed, “The mass murderer has met his fate. He was responsible for the death of thousands of innocent Pakistanis. May he burn in hell for eternity.” [6] When Tahir Yuldushev, the head of the Islamic Movement of Uzbekistan, a FATA-based terrorist group tied to al-Qaeda was killed by a missile strike in the fall of 2009, the Daily Times reported, “The death of Tahir Yuldashev at the hands of the Americans has, as in the case of Baitullah Mehsud, provided relief to Pakistan” (Daily Times [Lahore], October 3, 2009).
FATA-based Farhat Taj of the Aryana Institute described the sentiments of the natives of Waziristan as follows:

"They want al-Qaeda along with the Taliban burnt to ashes on the soil of Waziristan through relentless drone attacks. The drone attacks, they believe, are the one and only “cure” for these anti-civilization creatures and the U.S. must robustly administer them the “cure” until their existence is annihilated from the world. The people of Waziristan, including tribal leaders, women and religious people, asked me to convey in categorical terms to the U.S. the following in my column. Your new drone attack strategy is brilliant, i.e. one attack closely followed by another. After the first attack the terrorists cordon off the area and none but the terrorists are allowed on the spot. Another attack at that point kills so many of them. Excellent! Keep it up! (Daily Times. February 6)."

The previous remarks would seem to demonstrate that Pakistanis are far from unified in their opposition to the drone strikes. There would seem to be mounting evidence that many Pakistanis, especially those in direct contact with the Taliban, do not oppose the American drone campaign. 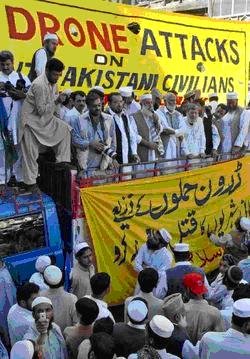