On April 11, the Russian state news agency RIA Novosti quoted a government official as saying that “according to the preliminary information, three suicide bombers blew themselves up near the Novoselitsky district police station in Stavropol region (RIA Novosti, April 11). The first surprising fact about the incident was the location of the terrorist attack. Novoselitsky district is located in the steppes of eastern Stavropol region. Its population is 26,000 people 18 percent of whom are North Caucasians, and the largest group among the latter are Dargins, who make up a mere 6.5 percent of the district’s total population. No military bases, strategic objects, prisons or anything else exist in the area that could be of interest to the suicide bombers who reportedly carried out an attack in Novoselitsky district.

Three rebels indeed attacked the Novoselitsky police station in Stavropol region on the morning of April 11, but fortunately the attack failed. According to investigators, the terrorists were stopped at the entrance to the police station. A police officer reportedly discerned something suspicious about the visitors. One of the militants blew himself up, and the police shot and killed the other two. Investigators assume that Islamic State (IS) supporters were behind the attack. Official Russian media reported that “several terrorists unsuccessfully tried to infiltrate the territory of the Ministry of Interior unit, and three blew themselves up within five to six meters from the building” (Slon.ru, April 11).

According to Russia’s Investigative Committee, three residents of the village of Kitaevskoe—32-year-old Zaur Akaev, 24-year-old Ramazan Khaibulaev and 19-year-old Isai Abdulatipov—took part in the attack on the Novoselitsky district police station. Investigators said that all three individuals had previously been prosecuted for various crimes, including, in the case of one of them, the murder of his brother-in-law (NTV, April 11). Khaibulaev was charged with theft. Abdulatipov spent time under arrest for illegal possession of drugs. It is unclear why Akaev went to settle scores with the police with a hand grenades instead of a suicide bomber’s vest (Lifenews.ru, April 11).

The government dispatched a large police force to Novoselitsky district, including officials from Moscow. The police turned everything upside down in the district, questioned the relatives, friends, and neighbors of the attackers, and searched their homes. The police also questioned members of the Dagestani diaspora since the slain suspects were from ethnic groups indigenous to Dagestan. However, investigators failed to identify whether the suspects attacked the police station by themselves or if a terrorist group orchestrated the attack (Kommersant, April 12).

The police carried out over 60 searches in various parts of Novoselitsky district. They questioned over 100 individuals, but only managed to find out where the improvised explosive devices (IED) were assembled (RIA Novosti, April 12). After a day, the government officials stated that the police had detained an accomplice of the people who had participated in the attack on the police station but released no details of his involvement in the attack (Izvestia, April 13).

Some experts on the North Caucasus hastily stated that militants returning to the region from Syria were causing a new wave of tension (Svpressa.ru, April 11). An expert with the Fund of Electoral Policies, Andrei Serenko, said that “the existence of an IS cell in Stavropol proved that the organization has suicide bombers and explosive devices. In the near future, the IS will reveal its presence in other regions of Russia, including Moscow” (Kavkazsky Uzel, April 11). However, jumping to such far-reaching conclusions after the incident in Stavropol is unjustified. The Russian experts’ attempts to seek out ties between all incidents and the IS (Kommersant, April 11) only reflect the current fashion in Russia. As Mikhail Roshchin, a Russian expert and specialist on Islam, said: “Of course, we can now attribute everything to the Islamic State. However, given the fact that the explosion took place in a village, not in a large city, the incident looks quite absurd” (Kavkazsky Uzel, April 11).

Another Russian expert on Islam, Akhmet Yarlykapov, agrees with Roshchin. Yarlykapov thinks that the Islamic State would not have given its consent to launch a risky operation with little potential outcome. Losing three suicide bombers in one incident is too much even for the IS. The Islamic underground movement spends months preparing every suicide bomber for an attack. Hence, it is unlikely that the IS can afford losing its people for a diversionary shot in the Stavropol wilderness.

The police must have realized that their story is too unbelievable and in the first hours after the news about the attack in Stavropol broke, the official Russian media suddenly lost all interest in the attack. Within the first four hours after the incident, the Kremlin signaled what to write and how to cover it. Russian presidential spokesman Dmitry Peskov said it was necessary “to clearly understand who organized it, who was behind it,” in order to determine whether it was connected to the terrorist threat or to ordinary criminal violence (Kommersant, April 11).

Most likely, the police officer was for some reason scared of Akaev and his two friends and shot them. To conceal this and make the police come out clean, the police probably decided to declare the slain individuals “suicide bombers.” The officials did not find even a hand gun on them, which is quite strange for militants. Thus, the incident was most likely a criminal event rather than a suicide bombing attack on the Stavropol district police station, and was almost certainly not an attack staged by the Islamic State. 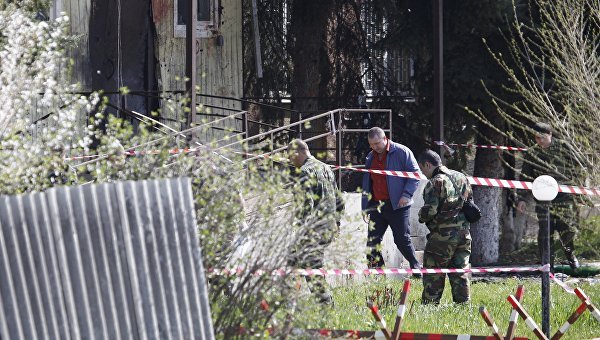 Back
Is Russia Preparing the Annexation of So..Next
Political Calculations Behind Italy’s ..

The Jamestown Foundation is held a webinar on China’s External... END_OF_DOCUMENT_TOKEN_TO_BE_REPLACED

On May 18, Senior Fellow Janusz Bugajski participated in a panel hosted by the European Conservatives and Reformists Group in the European Parliament, titled “The... END_OF_DOCUMENT_TOKEN_TO_BE_REPLACED

The ongoing struggle for control of Somalia is one of the world’s most complicated. With the country already effectively split into three parts, it may be too late to speak of a Somali nation. While the popular conception of this conflict pits al-Qaeda associated Islamists against a presumably Western-friendly... END_OF_DOCUMENT_TOKEN_TO_BE_REPLACED