Leonid Tibilov, the de facto leader of the separatist Georgian province of South Ossetia, (Tskhinvali region), declared, on April 11, that his government is planning to hold a referendum about whether to join the Russian Federation. The vote will be held before August of this year (Civil Georgia, April 11).

South Ossetia’s separatist regime has entertained the idea of such a referendum and, more generally, of joining Russia for a long time. In fact, it already held two similar referendums within the last 25 years, with paradoxically contradictory results. Specifically, in 1992, Ossetian separatists asked their ethnic kin to vote on whether they wanted to join Russia. As the separatists claimed, 99 percent answered “yes.” Fourteen years later, in 2006, they held another referendum, this time asking South Ossetians if they wanted independence from Georgia. According to the separatist authorities, the local population again overwhelmingly answered “yes” (TASS, April 11). This time, the South Ossetian referendum will again resemble the wording of the question posed to the population in 1992—whether or not the separatist republic should join Russia. Thus, taken together, the past and future “referendums” confuse the issue of whether Tskhinvali actually seeks full independence or an annexation by Russia, since one technically precludes the other.

But more to the point, the current planned referendum (just like the previous two) is entirely illegal. The key factor here is that tens of thousands of Georgians—almost half of South Ossetia’s population—were ethnically cleansed from the region by the separatists in 1991–1992 and then on an even larger scale in 2008, during the Russian-Georgina war (Smr.gov.ge, September 2009). Consequently, it is unthinkable to consider any type of referendum held in the region as legal without first returning those tens of thousands of Georgians back to their ancestral lands and homes.

Moreover, even putting aside the question of legality, the proposed mid-2016 referendum raises a number of other questions. First and foremost, who really proposed that it be held? Considering the fact that South Ossetia is under Russia’s direct military occupation and that, subsequently, no big or small political matter is decided without Moscow’s involvement, it is highly unlikely that the announcement of the expected referendum came without Russia’s approval, if not on its initiative.

Second, what benefit does this referendum really bring to the Kremlin? The possible result of the referendum is a foregone conclusion: with ethnic Georgians having been almost entirely expelled from the region, clearly the “yes” vote for joining Russia will win. And based on such a result, Moscow may, in fact, move forward with annexing South Ossetia—despite the fact that Russian President Vladimir Putin, had previously, though not very convincingly rejected such a possibility (Pia.ge, April 14).

A “yes” vote in August further raises the question of merging South Ossetia with North Ossetia, something that South Ossetian separatists have long advocated (RT, February 20). Yet, there is a problem here. Specifically, the Ossetian ethnic group, located both north and south of the Caucasus mountain range, is divided into three subgroups, each with significant socio-cultural and political differences (Thomas De Waal, The Caucasus: An Introduction, New York: Oxford University Press, 2010, pp. 131–166). And these many disparities often spill out in public. For instance, this past March, the South Ossetian separatist regime called on the North Ossetian authorities to halt the planned concerts by the Georgian ensembles “Rustavi” and “Bani,” which were visiting the North Ossetian capital of Vladikavkaz (1tv.ge, March 24; see EDM, April 4).

If a merger of the Ossetians actually happens, and the two groups on either side of the Caucasus Mountain range eventually manage to overcome their differences, they will become a problem for Moscow. After all, for centuries, Russia’s policy of imperial rule traditionally relied on the principle of “divide and rule.” Currently, the Ossetians are widely considered loyal to Russia. But after already facing years of separatist tendencies in several of the other republics in the North Caucasus, the Kremlin cannot be entirely certain how a united “greater Ossetia” might be affected by such regional trends.

So again, why does Russia really need this referendum if, in the long run, it could sow the seeds of possible turmoil for Moscow? A plausible answer only becomes apparent when zooming out to a broader view of Russian-Georgian relations. Russia’s revanchist regime, in its usual style of blackmail and sabotage, is most likely looking to use the referendum as a “sword of Damocles” over Georgia. Specifically, having secured a South Ossetian “yes” vote for joining the Russian Federation, the Kremlin could then, at any time of its choosing, blackmail Tbilisi by threatening to act on the “expression” of the Ossetians’ “national will.” Moscow could use such leverage whenever Tbilisi tries to pursue a pro-Western foreign policy course or simply if Georgia refuses to submit to some large or small Russian demand.

So far, the current Georgian authorities have shown only their characteristic naivety and lack of understanding of the gravity of the situation. To date, they have limited themselves to condemning the South Ossetian separatist regime and called the expected referendum illegal (Timer.ge, April, 12). But Georgians might soon find out that illegality does not necessarily equal weakness in the unforgiving chaos of international politics. Moscow could soon start actively using the upcoming referendum against Tbilisi, further increasing Georgia’s vulnerability to the Kremlin’s revanchist policies. 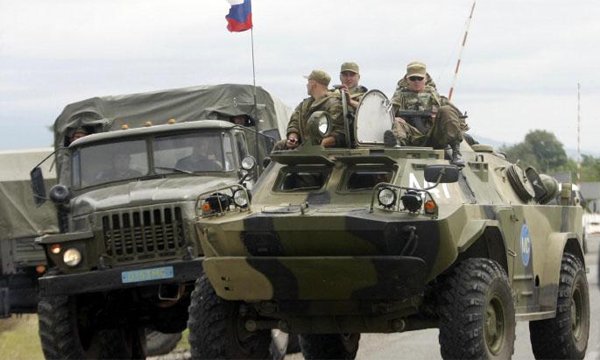 Back
Russia’s Image in Armenia Damaged by F..Next
Reports of IS Suicide Bombers Targeting ..

The Jamestown Foundation was proud to host a conference on... END_OF_DOCUMENT_TOKEN_TO_BE_REPLACED

On June 6, Jamestown’s President Glen E. Howard was quoted by Task and Purpose in an article on Russia’s Chechen fighters in Ukraine. END_OF_DOCUMENT_TOKEN_TO_BE_REPLACED

Dr. Adrian Zenz is one of the world’s leading scholars on People’s Republic of China (PRC) government policies towards the country’s western regions of Tibet and Xinjiang. Research performed by Dr. Zenz in 2017-2018 played a significant role in bringing to light the Chinese government’s campaign of repression and... END_OF_DOCUMENT_TOKEN_TO_BE_REPLACED