From the outset, the Italian government has been among the most tepid enforcers of the European Union’s sanctions against Russia. And as the impact of Western sanctions has reportedly negatively affected the Italian economy, Rome appears increasingly determined to overcome the current regime of penalties imposed on the Kremlin (Sputnik News, April 15; Ambmosca.esteri.it, accessed April 18). Yet, an in-depth look at Italian-Russian trade dynamics, as well as Russia’s import-export data at large, reveals that any attempt by Rome to revise Europe’s sanctions policy toward Moscow will be dictated by political considerations and not by economic needs. And the same goes for other EU countries even more inclined to smooth over the West’s relations with Russia.

In December of last year, the European Council prolonged EU restrictions against Russia by six months, until July 31, 2016. The eventual removal or easing of these sanctions is dependent on the full implementation of the Minsk ceasefire agreements, devised to end the conflict in eastern Ukraine between the military units loyal to the government in Kyiv and Moscow-backed separatists.

The Kremlin retaliated against the Western penalties with its own ban on food imports from Europe and the United States, purportedly causing a drastic reduction of Italian exports to Russia. As a result of European sanctions and Russian counter-penalties, Italian exporters estimate they have lost $4 billion in earnings between 2013 and 2015, a decline of 34 percent over this period, according to the Italian small business association CGIA (Cgiamestre.com, March 26).

Italy is Russia’s second-largest European trade partner after Germany, and has over 400 companies operating on Russian territory. Consequently, the Italian industrial sector is pushing hard for lifting restrictions against the Kremlin (Ambmosca.esteri.it, accessed April 18). Pressed by the national business community, the Italian government is working in that direction. Italy’s Prime Minister Matteo Renzi questioned the automatic renewal of EU penalties against Moscow at the end of 2015. While meeting with his Hungarian counterpart, Peter Szijjarto, Italian Foreign Minister Paolo Gentiloni reiterated Renzi’s concept in mid-March, adding that a decision on Russian sanctions could not be taken in the absence of political debate at the highest level (RT, March 15).

Plenty of signals point to Italy’s active commitment to de-escalating tensions with the Kremlin. In June, Renzi will meet Russian President Vladimir Putin in Russia and attend the St. Petersburg International Economic Forum, wherein Italy participates as a partner country (Sputnik News, April 15). And during talks in Moscow with Russian Foreign Minister Sergei Lavrov, on March 25, Gentiloni underlined once again Russia’s key role in the ongoing Syrian peace process (Huffington Post—Italy, March 25). More importantly, it seems that Renzi’s cabinet is preparing Italian companies for a post-sanctions environment. In this regard, Italy’s embassy to Moscow recently published a guide to help Italian entrepreneurs invest in Russia, a document drafted and promoted in association with Moscow’s public and private investment authorities (Ambmosca.esteri.it, accessed April 18).

An ever-growing number of countries within the European bloc, which the Russian leadership accuses of being dominated by a “Russophobic minority,” shares the Italian viewpoint that the sanctions regime should be revised (TASS, March 25). France, Austria and the Czech Republic have now joined EU members with strong political and economic ties to Russia—like Hungary, Greece and Cyprus—in advocating more friendly relations with Moscow (Il Foglio, April 8). Moreover, Germany, the EU’s political and economic pivot, is itself looking to mend fences with the Kremlin (Handelsblatt, April 8).

In addition to commercial calculations, many EU countries think that the Kremlin could be a valuable asset to try and tackle delicate geopolitical crises affecting, directly or indirectly, the European continent: they include the current civil wars in Syria, Libya and Yemen, terrorist threats from the self-styled Islamic State and al-Qaeda, as well as a potential new full-scale war between Armenia and Azerbaijan over Karabakh.

Thus, the EU consensus on penalties against Russia appears on the verge of unravelling. But the idea that trade losses have fueled the anti-sanctions sentiment in Europe is misleading, and Italy is emblematic of this misperception. In reality, the collapse of Italian exports to Russia is not linked to the sanctions regime. It is a product of both the deep economic crisis afflicting the Russian Federation as well as the fall in the value of the ruble (with the consequent loss of purchasing power). Accurate data analysis, in fact, shows that the sharpest decline in Italy’s export to Russia hit the manufacturing sector, which is not impacted by the Russian counter-restrictions at all (Corriere della Sera, March 27).

Additionally, it is worth noting that Russia has seen a decrease in trade even with countries not touched by its economic bans, including China. Moscow has tried to shift its economic attention to Beijing to offset plummeting trade with the West due to sanctions over Ukraine. But in 2015, combined Sino-Russian trade fell by 27.8 percent, to $64.2 billion on a yearly basis, as Chinese exports to Russia declined by 34.4 percent to $32.9 billion, Beijing’s General Administration of Customs reports (China.org, January 13).

As it is actually Russia’s economic weakness that has been pushing down Euro-Russian trade, the mounting campaign throughout Europe to lift or ease sanctions against Moscow is clearly being driven mainly by political—not economic—motivations, largely related to the domestic agendas of various EU member states. And as far as its vested interests are concerned, Rome aims to exploit its privileged and proven ties with the Kremlin to regain some sort of centrality within EU institutions, after Germany and France have often excluded it from the strategic control of the European Union over the past decade (see EDM, January 18). Rebuilding Italy’s robust political link to Russia is, thus, a central feature of this strategy. 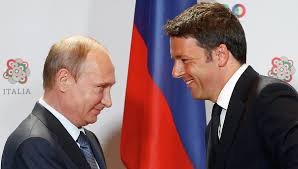 Back
Reports of IS Suicide Bombers Targeting ..Next
Creation of Russian National Guard Could..