Russia’s air operations in support of the Syrian Arab Army (SAA), which commenced on September 30, 2015, continue to experience modification and experimentation despite President Vladimir Putin’s order to begin withdrawing military forces in mid-March. Efforts to bring a meaningful ceasefire to Syria’s civil war has had little impact on Russian political-military decision-making regarding the need to steadfastly support the SAA in its latest efforts around the heavily populated city of Aleppo (Vedomosti, May 5). However, though the Aerospace Forces (Vozdushno Kosmicheskikh Sil—VKS) campaign continues, albeit at a reduced tempo, Moscow has announced the complete withdrawal of its Su-25 ground-attack aircraft from its airbase near Latakia. Their role, performance, missions and actual departure from Syria reveal considerable detail concerning VKS operations and the possible “lessons learned” that the Russian General Staff may draw from these experiences. Indeed, the deployment of various military assets in the theater of operations in Syria has provided the General Staff with an experimental combat testing ground, which is the sine qua non of reaching an understanding of the overall nature of Moscow’s use of hard power. It appears that, to an extent, this also applies to well-known and reliable assets such as the Su-25 (Interfax, May 4-9; see EDM, January 26).

On May 4, Major-General Igor Konashenkov, the defense ministry’s spokesman, announced the Su-25 withdrawal. Konashenkov noted their departure among around 30 aircraft from the airbase, but said the remaining air grouping deployed in Syria is sufficient to support an effective fight against “terrorist groups.” At the same time, he dismissed reports that the VKS was responsible for recently bombing a hospital in Aleppo, as alleged by the London-based Observatory for Human Rights in Syria. Officially, the VKS operation targets groups such as Jabhat al-Nusra, supports the SAA, and strictly adheres to various forms of ceasefire. Moscow is keen to advertise its constructive role in distributing humanitarian aid, demining in Palmyra, and it has quickly denied using ordinance in civilian areas (TASS, May 7; Rossiyskaya Gazeta, Izvestia, May 4). Much of the Russian media coverage concerning the “withdrawal” of forces from Syria, or the latest decision to pull out the Su-25s from Latakia, is scant on detail, leaving commentators guessing about the operational motivations.

Of course, the deployment of Su-25s as part of the VKS air grouping in Syria came as no surprise, as most of the air group consisted of platforms traditionally used in Russian military operations. The Su-25 (Grach, Rook), North Atlantic Treaty Organization (NATO) designation “Frogfoot,” first entered service in the mid-1970s, designed for close-air-support (CAS) operations for Soviet Ground Forces. Since its introduction, the Su-25 has been a hallmark of Russian air operations, known familiarly by various terms such as the “flying tank”; recent VKS pilots say the Su-25 is like flying a Kalashnikov. In line with Putin’s order to begin withdrawing forces from Syria—misinterpreted by some as meaning a total end to Russian operations—the Su-25s can quickly be re-deployed if necessary (Voyenno Promyshlennyy Kuryer, April 26).

The aircraft is a veteran of conflicts in Afghanistan, Tajikistan, both Chechnya wars, and the August 2008 Russia-Georgia War. Despite its modernization, even the latest variant—the Su-25SM—cannot protect itself against many current anti-aircraft systems and is consequently seen as too vulnerable for modern conflicts. Its twin weaknesses are a proclivity for early detection and its inability to evade enemy air defenses. During the Russia-Georgia War, Su-25s and Su-25SMs proved vulnerable to enemy small arms fire and man-portable air defense systems (MANPADS). In the VKS operations in Syria, these aircraft performed an estimated 3,500 sorties out of a total, to date, of around 9,000. In its combat missions in Syria, unmanned aerial vehicles (UAV) and special operations forces were the eyes and ears of the platform, with much of its ordinance proving to be highly accurate. The Su-25, despite the deployment of more modern assets, is the real workhorse of the air campaign (Voyenno Promyshlennyy Kuryer, April 26).

Two questions emerge from the removal of the Su-25s from Latakia: why did Moscow choose to do so at this time, and what did the General Staff glean from their combat performance? It appears that the progress of the campaign and the recent advances made by the SAA resulted in the decision to pull the Su-25s; they were no longer needed as the fighting had ebbed in its intensity. As far as the experimental dimension, their role in Syria—though quite standard and operating at altitudes to avoid MANPADS (above 5,000 meters)—was also tied to refining modernization plans (Voyenno Promyshlennyy Kuryer, April 26).

An important aspect of the plane’s use in Syria relates to the intermittent calls to completely scrap and replace the fleet of Su-25s. Since 2011, the defense ministry examined several such schemes, with consensus emerging around developing a new workhorse platform based on the Su-25SM. However, according to the chief designer of the Su-25, Vladimir Babak, the deep modernization of the platform began immediately after the conclusion of the Russia-Georgia War and envisaged equipping it with a modernized pressurized cabin, new electronics, including jamming equipment and radars, and the latest anti-tank missiles. The task of modernizing the Su-25s involved enabling the platform to be used in theaters with advanced air defenses and correcting its existing weaknesses. The result of the modernization effort is to introduce the Su-25SM3, with advanced capabilities, including modern electronic warfare (EW) systems, in particular the “Vitebsk-25” protection system. The Vitebsk-25, also developed for use on board Mi-8AMTSh, Mi-8 MTV-5, and Ka-52 helicopters, protects the aircraft against advanced MANPADS and allows the targeting of enemy radars using the Kh-58 missile (Voyenno Promyshlennyy Kuryer, April 26).

The VKS plans to procure at least 45 Su-25SM3s by 2020. In addition, the defense industry is working on another Su-25 upgrade: the Su-25SMT. This modernized platform will possess the same modernized electronics and capabilities as the Su-25SM3, but with an increased flight range: with its pressurized cabin, it will operate at up to 12,000 meters, thus ensuring its longer-term importance in modern warfare. With much of this planning stemming from 2008, the Su-25 modernization plans were consolidated. They are cheaper to produce than other modern platforms and will take the place of multirole strike aircraft. In this sense, at least some of the military experimentation in Syria is nothing revolutionary, but merely an ironing out of details concerning ongoing modernization (Voyenno Promyshlennyy Kuryer, April 26). 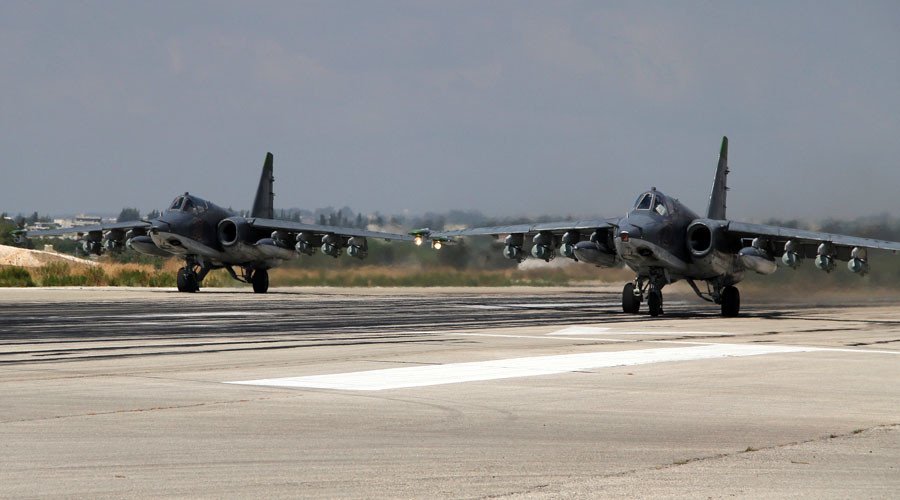