The first ever meeting of the Forum of Free Russia took place on March 9–10, in Vilnius, Lithuania. It was a unique public event, featuring a direct dialogue between Russian political emigrants and oppositional activists still residing in Russia. Such a conference would be impossible to hold in present-day Russia. And indeed, many of its exile participants are afraid to return to their home country for fear of political persecution (Grani.ru, March 9).

More than 200 people participated in the Forum. Several thematic sessions were organized on various aspects of the current situation in Russia, including human rights activities, the fight against corruption, problems of Russian journalism and society, the foreign policy of Vladimir Putin’s Russia, and international security (Forumfreerussia.org, accessed March 23). One of the sessions, originally unplanned, but held at the request of the participants coming from the Russian regions, was called “The Regional Aspect of Reforms in Russia.” It gathered about 50 civil society activists—from St. Petersburg to Siberia. These activists generally had no relation to the current government, but instead represented numerous independent networks or social movements inside Russia that are seeking to increase regional autonomy within the Russian Federation.

The format of this session was also different from the rest. There were no speakers on the stage. Instead, the session was organized as an interactive round table, where all the participants could speak out. In general, they mostly spoke cautiously out of fear that upon their return home, they could face prosecution on criminal charges for “appeals to violate the territorial integrity of Russia.” It is significant that this law in Russia was adopted in December 2013 and entered into force in May 2014, shortly after the Russian Federation forcibly annexed Ukraine’s Crimean peninsula (Rossiyskaya Gazeta, December, 30, 2013).

Shortly after the collapse of the Soviet Union, on March 31, 1992, the new Russian government signed the Federal Treaty. It established the contractual principle of the Russian Federation and delegated many powers to the regions. Yet, this new power arrangement codified an inherent inequality among Russia’s federal entities: the ethnic-based republics were granted sovereignty, while the oblasts were not. However, with the adoption of the Russian Constitution in 1993, the contractual principle of the federation was largely nullified, and the mention of the sovereignty of the republics disappeared. A further legal evolution of Russia was characterized by the increasing centralization under the presidency of Vladimir Putin, which found its ultimate expression in the so-called “vertical of power,” which canceled direct elections of governors and local leaders of the Russian regions. Instead, under the Putinist “power vertical” system, the Russian president was given the power to nominate regional governors (to be rubberstamped by the local legislatures), who in turn would nominate local mayors.

Direct elections of regional governors were reinstated on June 1, 2012, following Putin’s return to the Kremlin. But these electoral contests cannot be considered truly free or fair. Candidates are nominated by political parties and they have to be agreed on by the local legislative assemblies. And because every Russian region is dominated by the ruling United Russia party, the results for gubernatorial elections across the country are generally always a foregone conclusion, thus precluding the election of candidates opposed to the Kremlin. Thus, the current system basically maintains the “vertical of power,” just in a different form. The economic and tax systems in Russia are also centralized. Even in the cultural sphere, a unitary Russification policy is being implemented, even though more than 100 ethnic groups live in Russia (see EDM, October 27, 2015; Jamestownfoundation.blogspot.com, June 26, 2013, September 30, 2015; Windowoneurasia2.blogspot.com, September 7, 2015). The main exception to this trend in Russia has been Ramzan Kadyrov’s Chechnya, which was allowed wide autonomy in exchange for its loyal pro-Kremlin policies.

The participants of the “The Regional Aspect of Reforms in Russia” session in Vilnius earlier this month strongly opposed such centralization of the Russian Federation. One of the session moderators, Viktor Korb, the director of the Omsk-based Agency for Regional Studies, spoke of the need to restore civil self-government in all Russian regions. This, he said, should include free elections of authorities at all levels—regional and municipal. Another moderator, Ilya Lazarenko, the chief editor of the web magazine Russian Fabula, insisted on the need to transform all Russian regions into equal republics, thus turning Russia into a symmetric federation (Russkaya Fabula, March, 17). Viktor Nikolaev, a journalist from St. Petersburg, even suggested a possible future name for the country—the United States of Russia.

The presence of activists from St. Petersburg at the Freedom of Russia Forum is an interesting factor. In St. Petersburg today, there is an active, though informal regionalist movement calling for the unification of St. Petersburg city with the surrounding Leningrad region into a “Republic of Ingria,” which would enjoy greater self-government. “Ingria” is a historical name referencing this area’s name of Ingermanland, before it became a part of Russia during the 15th–18th centuries. Indeed, once inside Tsar Peter I’s Russian Empire, this area’s name was initially the Ingermanland Governorate. Today, supporters of the Ingrian regionalist movement often hold marches and brandish Ingrian flags (Facebook.com/groups/ingria, accessed March 23).

The organizers of the Forum of Free Russia were, in fact, its main speakers—Garry Kasparov and Andrey Illarionov—along with other well-known Russian opposition leaders. However, the details regarding the financial backing for the Forum has been spotty; most of the participants arrived at their own expense. Reportedly, the Lithuanian foreign ministry also provided some support, in the form of a welcome reception and by providing the venue for the event. Paradoxically, the Forum’s expat Russian organizers preserved a largely Moscow-centric mindset that political change must be top–down (Forumfreerussia.org, accessed March 23).

Contemporary Russian regionalism is largely an intellectual project. But if it is ever given the opportunity for political self-realization (for example, in the form of regional political parties, which are now banned), it could radically change the political map of Russia. Debate over the revival of Russian federalism is becoming increasingly popular among the Russian opposition. Organizers of the March gathering in Vilnius promised to hold the next Forum in September. The project of a new, equitable Federal Treaty in Russia will likely be discussed.

Of course, an oppositional Forum held abroad calling for greater democratization and federalization of Russia is unlikely to directly influence current policy in Moscow. But the topics discussed in the Lithuanian capital earlier this month have hit upon a serious double standard in Russia. The Kremlin offers “federalization” for Ukraine and Syria, while maintaining strong unitarism and centralism at home. And such a sharp contrast could encourage a domestic backlash that would undermine the Putinist system. 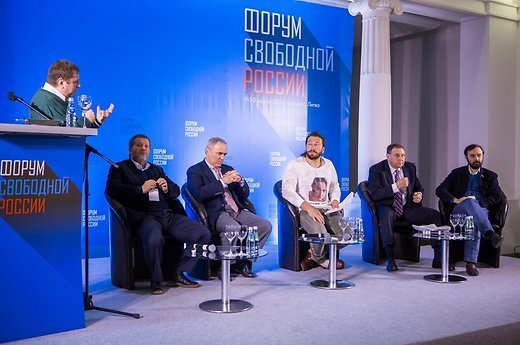 Back
With Putin’s Blessing, Kadyrov Continu..Next
Arrest of an ‘Oligarch’ in Belarus

On January 9, The New York Times ran an article on a scandal involving Hong Kong government elites that featured an interview with Jamestown Senior... END_OF_DOCUMENT_TOKEN_TO_BE_REPLACED

The June 2019 issue of Militant Leadership Monitor features a brief on the death of the deputy leader of Boko Haram, Man Chari; an analysis of Libyan National Army chief of staff and right-hand man to General Haftar, General Abd al-Razaq al-Nadhuri; a look into the Kenyan financier of... END_OF_DOCUMENT_TOKEN_TO_BE_REPLACED