On March 11, Yury Chyzh, one of Belarus’s wealthiest entrepreneurs, was arrested. Chyzh heads Triple, a conglomerate with 5,000 employees and assets in various businesses, including the oil trade, construction, the import of alcoholic beverages, the hotel industry and other sectors.

By the standards of Russia or Ukraine, Chyzh is no oligarch. At one point, a Ukrainian source assessed his wealth at $90 million (Delo, August 6, 2010). When, in 2011, this author asked President Alyaksandr Lukashenka if Chyzh deserves to be called an “oligarch,” the response was, “What are you talking about? He is a pauper; he borrows money from me for his foreign trips” (Svaboda.org, March 11). Yet the very reason this question was asked was that Chyzh’s construction firm was active in the preparations for the upcoming (2014) ice hockey championship held in Minsk. Moreover, Chyzh regularly played hockey as well as mowed grass in the company of the president himself. And in 2011, he topped the ranking of Belarus’s most successful businessmen (Ej.by, accessed March 23).

In March 2012, the European Union included Chyzh on its list of Belarusians under travel sanctions on account of his financing the “Lukashenka regime” in exchange for political support for his business. However, in 2015, following the ruling of the European Court of Justice, sanctions on Chyzh were removed (Tut.by, October 6, 2015)—a full four months before sanctions were lifted on most (all but four) Belarusians barred from the EU, including President Lukashenka.

Naturally, there is no shortage of theories trying to explain these arrests. Perhaps the most overarching argument was advanced by Alexander Nosovich, a Kaliningrad-based researcher and journalist with keen interest in Belarus. Comparing Ukraine with Belarus, Nosovich observed that “whereas in Ukraine, the oligarchs beget the president, in Belarus, it is the president who begets the oligarchs” (Nosovich, March 13).

As for more specific explanations for these developments, four stand out. According to Alexander Feduta, Lukashenka’s press secretary in 1994–1995 and since then an active member of the opposition, the opening of Western credit lines to Belarusian industry that followed the lifting of European sanctions has intensified the struggle between the potential users of those credit lines. And some younger “oligarchs” simply succeeded in sidelining Chyzh. Earlier, Chyzh himself succeeded in purging his own business partner, Vladimir Yaprintsev, who was arrested in August 2015 (Naviny.by, March 12).

The second version, offered by Yury Drakakhrust of Tut.by and the Belarusian service of Radio Liberty, posits that Chyzh’s arrest resulted from jockeying for power within the ruling elite. More specifically, by arresting some leading figures who embody economic liberalism, Belarusian KGB chair Valery Vakulchik was able to offset the amplified influence of Foreign Minister Uladzimir Makei. Makei’s authority in the government was naturally boosted by the lifting of the EU sanctions—which Makei had worked for indefatigably since 2011. Drakakhrust underscores that his theory does not emanate from some insider knowledge; rather, it is based on an understanding of how a certain type of a political system works, and there is hardly anything endemic to Belarus in that regard. Moreover, Drakakhrust notes that his explanation is not defined by the specific personalities of Makei and Valulchik; instead, it takes into account the roles they play within the political apparatus, i.e., pursuing openness and better relations with the outside world versus working to ensure regime security and resisting rocking the boat (Tut.by, March 16).

Piotra Piatrouski, a Ph.D. student at the Institute of Philosophy and an associate at the informal and government-friendly think tank Citadel, presents the third possible rationalization. Specifically, Piatrouski writes that the arrests of a series of Belarusian would-be oligarchs are in line with the ensuing consequences of the late Chinese leader Chairman Mao Zedong’s short-lived policy of “letting a hundred flowers bloom and a hundred schools of thought contend.” It is well-known that after a brief period of liberalization (in the mid-1950s), Mao launched reprisals. Likewise, Piatrouski believes, the lifting of sanctions in association with a deep economic crisis in Belarus unleashed initiatives for personal enrichment—thus singling out the least-reliable members of the entrepreneurial class. And they had to be cleansed before some real reforms could commence (Facebook.com/piotra.piatrouski, March 15).

Finally, the official version, voiced by KGB chairman Vakulchik himself, is that Chyzh created a fake Moscow-based firm for use in money laundering and tax evasion on a grand scale. A similar accusation was leveled against Baskin. Whereas Chyzh was reportedly apprehended as he drove toward the western border of Belarus at a speed of 200 kilometers (124 miles) per hour, Baskin was arrested at the Minsk International Airport (Belta, March 15). Vakulchik actually confirmed that the previous arrest of Yaprintsev had been triggered after Chyzh and his Russian partners informed the KGB about Yaprintsev’s illegal actions (Tut.by, March 15). It is hardly surprising that, subsequently, the same fate befell Chyzh himself.

The arrests of a couple of leading entrepreneurs and their associates should be seen against the background of the intensified fight against corruption in Belarus. In 2015, 485 people were sentenced on corruption charges, 63 percent more than in 2014. According to Transparency International, in 2015, Belarus was only slightly better on this count than Russia and Ukraine: 107th versus 119th and 130th, respectively (Transparency.org, 2015). Anecdotal evidence—or what is usually thought of as “anecdotal”—suggests otherwise. The opinion that Belarus is vastly less corrupt than Russia let alone Ukraine is persistent all across Europe’s East and shared by the overwhelming majority of people. Recently, a reputable Ukrainian source even claimed that “corruption in Belarus is almost non-existent” (Strana.ua, March 17). Russians usually express a similar opinion.

But if the Belarusian government’s intolerance for corruption is indeed real, the arrests of the “oligarchs” represent more than just a keyhole view into a relatively closed regime. In fact, they may be an indication that the types of structural reforms demanded by the International Monetary Fund as a condition for reopening its credit line actually have a chance of succeeding in Belarus—more so than in either of the other two neighboring Eastern Slavic countries. 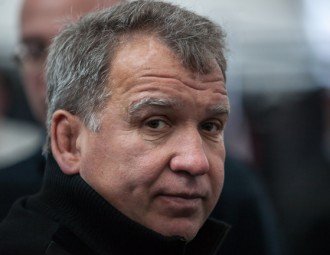 On November 11, the Kremlin announced the completion of... END_OF_DOCUMENT_TOKEN_TO_BE_REPLACED

On November 17, Jamestown Foundation Senior Fellow Olevs Nikers was interviewed by Romania-based outlet Veridica regarding, among other topics, the best possible outcome for the... END_OF_DOCUMENT_TOKEN_TO_BE_REPLACED