The bout of great-power euphoria sparked by the 2014 annexation of Crimea did not last long in Russia. The Kremlin quickly realized the region’s total dependence on mainland Ukraine. Over the past 60 years, heavy capital and labor investments as well as regular water, power and fuel supplies sent from Ukraine had transformed the formerly desert-covered peninsula into a lush garden (Istpravda.com.ua, March 3, 2014). But the lack of a natural land connection between Crimea and the Russian Federation forced Moscow to find alternative ways of accessing the annexed region. As the peninsula is separated from Russia’s North Caucasus (Krasnodar krai) by the relatively narrow (with a minimum width of around 4.5 kilometers) Kerch Strait, Russian authorities decided to link the Crimean and Caucasian shores via a bridge (Most.life, accessed May 10).

The project, estimated at 228 billion rubles (around $3.5 billion), was initially proposed to Gennady Timchenko, an oil tycoon and close friend of Russia’s President Vladimir Putin (TASS, August 4, 2014). However, Timchenko, a Finnish citizen with broad connections to business circles in the West, preferred not to take on such a risk to his reputation (Russia-IC, December 9, 2014). So the governmental contract was then offered to Arkady Rotenberg, another billionaire and a long-time associate of Putin’s, who, having complained about his would-be “total isolation” from the West, agreed to assume the lucrative “burden” out of “patriotic motives” (Kommersant, January 30, 2015).

On February 17, 2015, Russia’s federal transport authorities contracted Rotenberg’s StroyGazMontazh to design and develop a 19-kilometer-long raised transport passage across the Kerch Strait that would include a four-lane highway and a two-track rail line. Prior to that point, StroyGazMontazh had specialized only in building natural gas pipelines and relevant energy-sector infrastructure. The contract specified the start of steady motor traffic and test rail runs by December 2018, and the completion of the entire project by June 30, 2019 (Rosavtodor.ru, July 2, 2015).

Yet, these deadlines have been progressively pushed back, as it became apparent that the construction of the railway bridge would take more time than that of the motor-road. Currently, the railway segment is planned to go into operation no earlier than late 2019 (Molbuk.ua, April 13; Reporter-ua.ru, April 14).

The Kerch Strait’s harsh geophysical factors raise a lot of difficulties for the bridge builders. The Strait’s muddy bottom will require extremely long piles; the strong local current will necessitate shoring the structure’s foundation; and the infirm ground will compel the development of particularly complicated and expensive engineering solutions.

A 4.5-km-long temporary rail bridge over the Kerch Strait was erected during World War II, in 1944, as the Soviet Red Army advanced from east to west. However, the bridge was destroyed by heavy ice flows in February 1945 (Metrobuildivec.livejournal.com, October 3, 2015). Since then, unfavorable natural conditions had prevented any concrete attempts to rebuild a bridge across the Strait—until the Russian annexation of Crimea two years ago. But now, with international sanctions in place, low oil prices and a devalued ruble, Russia has been increasingly forced to take economic factors into account as well.

Nonetheless, as Crimean-born Ukrainian journalist Pavel Kazarin notes, the Kerch Bridge is more than just a large infrastructure development project. Rather, it represents a type of imperial symbol for the Kremlin, just like the 2014 Winter Olympic Games that were held in subtropical Sochi (Krymr.com, April 16, 2016). So for Moscow, building the Kerch Bridge is about much more than addressing a transportation or logistics challenge: it is about confirming Russia’s delusional superpower status and imaginary might, Kazarin argues. Even the fact that the project is being overseen by Putin’s personal friend is, in Kazarin’s opinion, the best illustration of the Kremlin’s willingness to build the bridge at any price, no matter the country’s accumulating economic problems and forced cutbacks in budget spending.

In compliance with the provisions of several bilateral (Ukrainian-Russian) and multilateral international treaties, the building of the bridge linking Crimea with southwestern Russia is illegal without Ukraine’s consent. And Kyiv has at least three legal mechanisms at its disposal to try to stop its construction (Ukrayinska Pravda, April 20):

The first option is to appeal to the Hague-based International Court of Justice (ICJ) of the United Nations. Though, to oblige this court to begin reviewing the case (that is, to pass a legally binding judgement), it is necessary to obtain consent of all the parties to the dispute for submitting the case. Russia will almost certainly not give such consent, and this is the main barrier that blocks the imposition of a legally binding decision that Ukraine needs. However, Ukraine could try to use this international court by requesting that it render an advisory opinion. Although non-binding, an ICJ advisory opinion is still considered sufficiently authoritative in international law. And as such, it could be quite useful to Kyiv not just in the context of the Kerch Strait Bridge, but also as it plans future legal strategies for returning Crimea to Ukraine.

The second option open to Kyiv is to initiate the creation of a special court (ad hoc arbitration) that would hear Ukraine’s lawsuit against Russia. Importantly, with the strategically important Ukrainian port city of Mariupol (Mariupil) located on the Sea of Azov, Ukraine has an objective interest in keeping clear the traditional maritime passage through the Kerch Strait, which connects the Azov Sea with the wider Black Sea. Whereas, Russia’s construction of the Kerch Bridge could, at the very least, lead to the infringement on Ukraine’s freedom of navigation and do significant harm to the local marine environment.

Finally, a third option could be for Kyiv to seek provisional measures (somewhat akin to a temporary “restraining order”) at the ICJ, which would stop Russia from building the bridge until the dispute is fully settled by a competent court or tribunal.

Pursuing any of the above mentioned mechanisms does not block Kyiv from simultaneously pursuing any of the others. Therefore, Ukraine has a strong incentive to use all three of these international legal mechanisms at the same time to halt the construction of the Kerch Strait Bridge. More than two years have passed since the beginning of Russia’s occupation of Crimea, but Kyiv has so far failed to take any concrete steps to stop the bridge’s construction. Time is running out, and to succeed, the Ukrainian government will need to start right away. 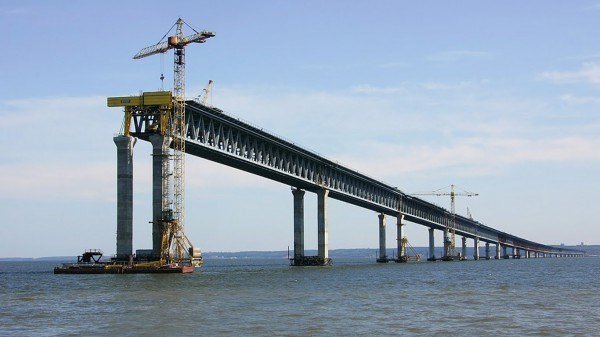 Back
Ethnic Russians Sound Alarm About Declin..Next
Will the Opposition Gain Seats in the Be..