Work on the Southern Gas Corridor’s (SGC) implementation intensified to an unprecedented degree in recent months. On March 17 and May 17, the ground breaking ceremonies of two key constituent parts of the Southern Corridor—the Trans-Anatolian Pipeline (TANAP) and the Trans-Adriatic Pipeline (TAP)—were held, respectively, in Turkey and Greece. “Once complete, TAP will be a major asset in European energy security,” the European Union’s Energy Commissioner Maroš Šefčovič said during TAP’s inauguration. The United States’ Special Energy Envoy Amos Hochstein added that, “The degree of the US commitment to this project is unshakeable” (Azernews.az, May 18; Athens.usembassy.gov, May 17).

When completed, the strategic Southern Gas Corridor will deliver Caspian-basin natural gas (first from Azerbaijan, and later perhaps from Turkmenistan, northern Iraq or other regional producers) via Azerbaijan, Georgia and Turkey, to European markets in the Balkans and Italy. In February, Baku hosted the second meeting of the Southern Gas Corridor’s Advisory Board, where EU High Commissioner Federica Mogherini made positive remarks for the SGC (Eeas.europa.eu, February 29). On March 30, during the Nuclear Summit in Washington, Azerbaijan’s President Ilham Aliyev thanked the US government for demonstrated support for the SGC’s realization, while Secretary of State John Kerry emphasized the Southern Corridor’s importance (President.az, March 30; State.gov, March 30). In December 2015, then–prime minister of Turkey, Ahmet Davutoğlu, and President Aliyev agreed to accelerate TANAP’s construction (Caspianbarrel.org, May 18).

According to BP Azerbaijan, the engineering, procurement and construction work on the framework of Stage II of the Shah Deniz offshore gas field is 70 percent complete. Meanwhile, the extension of the South Caucasus Pipeline in Azerbaijan and Georgia (which will link up with TANAP at the Georgian-Turkish border) is ongoing, and compressor stations have been installed in Georgia (Haqqin.az, May 25). Production from Shah Deniz Stage I (SD-I) is proceeding steadily, while SD-II will deliver 16 billion cubic meters (bcm) per year by 2018; SD-III (500 bcm of reserves) is projected to be operational in 2032. Additionally, Azerbaijan will be producing from the Shefeg-Asiman, Nakhchivan, Araz-Alov-Sharg, Absheron, Umid and Babek gas fields by 2030. The country’s proven and probable natural gas reserves are estimated at 2.55 trillion cubic meters (tcm) and 3.45 tcm, respectively (Natural Gas Europe, May 24; Abc.az, March 31).

Moreover, the TAP Consortium has awarded the following companies a contract for the engineering, procurement and construction work on the pipeline: the joint venture between Italian Enereco and Max Streicher for the onshore pipeline segment in Italy; Italian Renco for the pipeline receiving terminal (to connect TAP to the Snam Rete Gas network) in December 2015; Italy’s Bonatti and Greece’s J&P AVAX joint venture and France’s Spiecapag for the onshore pipeline sections in Greece and Albania in March; Saipem for the offshore section of TAP in April; the Joint Venture between Italy’s Renco and Greece’s Terna for two compressor stations and a metering station for TAP in May (Azertag.az, December 23, 2015; Tap-ag.com, March 4, 2016; Saipem.com, April 14; Tap-ag.com, May 4). The National Regulatory Authority of Albania has finalized TAP’s certification process as a transmission system operator under the EU Third Energy Package (Azernews.az, April 14). The construction of the underground section of TAP in Greece, Albania and Italy will start in 2016; construction of the subsea section will begin in 2017–2018; and gas supplies will start flowing in 2020 (Caspianbarrel.org, May 16).

In January, a group of human rights and environmental nongovernmental organizations (NGO) issued a provocative letter to the European Investment Bank (EIB) urging it not to finance the SGC (Counter-balance.org, January 23). Nonetheless, Azerbaijan’s State Oil Company (SOCAR) is already in the process of receiving a financial package for the SGC from the following financial institutions: the Asian Development Bank (ADB)—$1.5 billion for Shah Deniz II; the EIB—€1 billion and €2 billion ($1.12 billion; $2.24 billion), respectively, for TANAP and TAP; the European Bank for Reconstruction and Development (EBRD)—€1.5 billion ($1.68 billion) for TAP, with over $1.2 billion for Shah Deniz and supposedly for TANAP as well; the World Bank—$1 billion for TANAP. The remaining financing will be allocated by other commercial banks—Bank of China, ING Bank N.V, Societe Generale and Unicredit Bank Austria (Ebrd.com, August 7, 2015; Trend.az, June 3; Eib.org, March 23; August 13, 2015; Trend.az, May 13; December 3, 2015; Hurriyet Daily News, April 25).

Against the background of these developments, Russian President Vladimir Putin visited Greece on May 27. Presumably, the aim of the visit was to safeguard Russia’s gas flow to southeastern Europe via the so-called “Turkish Stream” and further via the proposed Interconnector Turkey–Greece–Italy (ITGI) across the Adriatic Sea (Energypress.eu, May 24). On February 24, Russian Gazprom, Italian Edison SpA and Greek DEPA signed a Memorandum of Understanding “on natural gas deliveries across the Black Sea from Russia via third countries to Greece and from Greece to Italy in order to establish a southern route to deliver Russian natural gas to Europe” by using the ITGI-Poseidon project, which was shelved in 2012, after TAP was selected for the SGC instead (Gazprom.com, February 24).

According to energy consultant Mikhail Krutikhin, along with the ambiguity of Turkish Stream, Russia seeks to revive the still-born “Poseidon” project. (Carnegie.ru, May 19). In fact, the ITGI-Poseidon pipeline is also included in the European Union’s PCI list, and the project has received all the necessary authorizations for construction and operation as well as a third-party access exemption for a period of 25 years (Eur-lex.europa.eu, January 1; Igi-poseidon.com, accessed June 16). Admittedly, the SGC’s initial volumes are not comparable to those promised by Russia’s “Turkish Stream.” Nevertheless, with the combination of Azerbaijani and Turkmenistani gas that may ultimately pass through the SGC, and considering Europe’s need to diversify away from Russia, the Southern Corridor continues to make the most strategic sense. 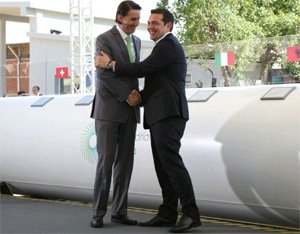 Back
Rebels in Ingushetia Step up Their Activ..Next
Fight Over Control of Georgian Oppositio..