A ship carrying United States military equipment arrived at the Georgian Black Sea port of Poti, on May 5. The equipment, which included US M1A2 Abrams Main Battle Tanks and Bradley Fighting Vehicles, was ferried from the Bulgarian port of Varna and will take part in “Noble Partner 2016”—the first trilateral military exercise involving armed forces from the US, the United Kingdom and Georgia (Civil Georgia, May 5).

Upon arriving in Georgia, the tanks and armored fighting vehicles were further transported via railroad to the capital, Tbilisi. Large military exercises are taking place from May 11 to 26, at the former Russian military base in Vaziani, a suburb of Tbilisi’s suburbs. An estimated 650 US, 150 UK and 500 Georgian troops will take part in the exercises. According to the Ministry of Defense of Georgia, Noble Partner is being run for the second year in a row—though this marks the first time that UK forces have also taken part. “The objective of the exercise is to increase the interoperability of Georgia’s light infantry company, which participates in the NATO [North Atlantic Treaty Organization] Response Force (NRF) with NATO and US forces. The scenario of the exercise is based on stability/defensive operations,” the defense ministry said in a statement (Mod.gov.ge, May 5).

Apart from the military ground equipment, several C-130 “Hercules” aircraft will also be used during the exercises. The maneuvers will conclude on May 26, Georgian Independence Day, the country’s main national holiday. Last year, a US military unit marched along Tbilisi’s central square with the Georgian military to mark Independence Day. Bradley Fighting Vehicles also took part in the parade, attracting significant attention from locals (Kommersant, July 8, 2015).

This year, Georgian public interest in the joint military exercises is expected to be even higher because the US Army has brought M1A2 Abrams Main Battle Tanks. Official sources do not specify how many of such tanks will participate in the exercises. But Irakly Aladashvili, the editor-in-chief of the independent military analysis journal Arsenal, said, in a May 6 interview with this author, that according to his information, 14 M1A2 Abrams tanks and about the same number of Bradley Fighting Vehicles have been dispatched to Georgia.

Aladashvili noted that the Vaziani training ground, where Noble Partner 2016 is taking place, is only 35 kilometers away from South Ossetia, occupied by the Russian army since the August 2008 war. “The Russian military stationed old T-72 tanks in South Ossetia. However, in Abkhazia, which is also occupied by Russia, Moscow has stationed 42 of the latest T-90A “Vladimir” tanks. Thus, today, Georgia is the only country in the world on whose territory the two best known modern tanks—the M1A2 Abrams and the T-90A “Vladimir”—will be stationed simultaneously. Many people would be curious to compare their capabilities,” Aladashvili posited (Author’s interview, May 6).

The commander of US Army Europe, Lieutenant General Ben Hodges, personally unveiled plans to hold Noble Partner 2016 exercises back in fall 2015. While visiting the international conference “The New Geopolitical Landscape of Europe: Security, Economic Opportunities, Freedom and Human Dignity for the Frontline States” in Tbilisi, Lt. General Hodges stated that the primary objective of the future exercises would be “to check how quickly American military equipment and servicemen can arrive on Georgian soil, if necessary” (Kommersant, July 8, 2015).

A number of Georgian analysts say that holding trilateral military exercises in a Tbilisi suburb and bringing M1A2 Abrams tanks to Georgia for the first time sends a “strong message” for all pro-Western forces in Georgia that favor the country’s further integration into Euro-Atlantic structures. “Georgia failed to receive a MAP [Membership Action Plan] at the NATO summit in Wales, in 2014. Georgia did receive, however, a ‘substantial package of cooperation,’ which envisaged holding intensive joint military exercises. Hence, Georgia’s partners are now demonstrating that they intend to make good on their promises,” GHN news agency columnist David Avalishvili explained. According to Avalishvili, “under the present conditions, when Georgia is unlikely to receive the road map for joining the alliance at NATO’s upcoming summit in Warsaw, the American military command in Europe is trying to demonstrate to Georgian society that the United States–Georgia Charter on Strategic Partnership allows bilateral and trilateral formats of military cooperation, including with Great Britain. The Charter was signed back when George W. Bush was the president of the United States” (Author’s interview, May 6).

NATO is also offering new projects for Georgia. The North Atlantic Alliance’s Deputy Secretary General Alexander Vershbow recently spoke in favor of giving Georgia and Ukraine the status of “associated partners of NATO” and working out a military-political cooperation format on the Black Sea region, according to the formula “28 + 2” (Kommersant, April 17).

Vakhtang Maisaia, a doctor of military sciences, told this author that NATO is trying to fill in the third stage of Georgia’s integration with the Alliance with actual content. The stage is called “intensive dialogue.” Maisaia said that “Georgia has been at the third stage of integration since 2006. MAP would represent a fourth stage, but because several influential European NATO countries—particularly France, and Germany—are still opposed to providing a ‘road map’ to Georgia, other partners, including the US and Great Britain, have proposed intermediate programs, such as the 28 + 2 format on the Black Sea and ‘associated partnership.’ Apart from that, they are intensifying the holding of joint exercises” (Author’s interview, April 4).

The majority of local observers agree that the Noble Partner 2016 exercise will significantly enhance the position of pro-Western forces inside Georgia in the run-up to the parliamentary elections, scheduled for October 8. Specifically, the trilateral military drills will signal that Georgia’s main Western partners—particularly the US—still have an interest in the South Caucasus country. “This is a strong argument during an election period because domestic pro-Russian forces will try to make the case that the US forgot about Georgia,” noted Giorgi Lebanidze, an analyst with the newspaper Prime-Time (Author’s interview, May 6). But after nearly a decade of waiting for MAP, it remains to be seen whether initiatives like Noble Partner 2016 will be enough to keep the Georgian population from giving up on Euro-Atlantic integration. 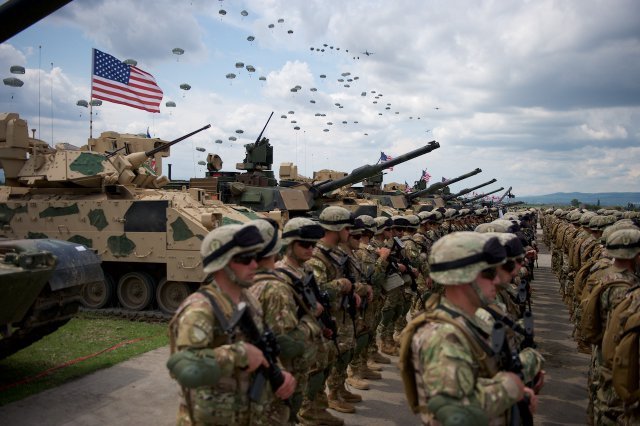 On August 4, the Jamestown Foundation held a webinar  on... END_OF_DOCUMENT_TOKEN_TO_BE_REPLACED

Jamestown Senior Fellow Margarita Assenova was featured in an event with the New Lines Institute for Strategy and Policy on Capitol Hill. The event was... END_OF_DOCUMENT_TOKEN_TO_BE_REPLACED

On December 8, 2015, The Jamestown Foundation held its ninth annual terrorism conference on The War in Syria, Islamic State and the Changing Landscape of Asymmetric Threats, at the University Club in Washington, DC. This full-length set of DVDs covers opening remarks, three conference panels and a keynote closing address... END_OF_DOCUMENT_TOKEN_TO_BE_REPLACED