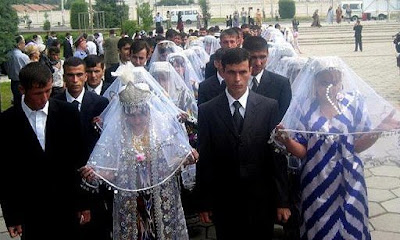 Tajikistan’s parliament has ruled that any foreign man wishing to marry a Tajik woman must provide her with real estate to qualify as a future husband. The parliament also requires that foreign men spend at least one year living in the country before tying the knot with local women.

The motivation behind parliament’s latest decision is the idea that the state must control the rights and interests of Tajik women. Too many marriages with foreigners end in divorce. Committing foreign men to real estate in the country might increase their loyalty to Tajik women, the parliament argues. Out of 2,500 international marriages, 600 ended in divorce. The majority of foreigners marrying Tajik women come from Afghanistan, Iran, Turkey, India and Pakistan.

The law is quite rigid, with precise details on most rituals’ limitations. It only allows 150-200 guests per wedding, with one hot meal served, no more than four cars in a wedding procession and three hours allocated for the entire celebration. The families of the groom and bride should provide equal funding for the celebration. Funerals may bring together no more than 100 people, a low number according to local standards.

The law also provides elaborate enforcement mechanisms. A penalty for violating these regulations comprises 2,000 somoni (approximately $580). The penalty is higher for people with political ranks or owners of a business. The law was created after Tajik President Emomali Rakhmon noticed how these ceremonies produce a devastating economic impact on the impoverished population. Surprisingly, the law has been quite popular, being reinforced by many in Tajikistan.

However, unlike the law on wedding and funeral spending, linking marriage to real estate shows the Tajik parliament’s inability to empower women though public policy. The law, in effect, will serve the interests of Tajik men, rather than women.

The Jamestown Foundation is pleased to host the webinar, “The... END_OF_DOCUMENT_TOKEN_TO_BE_REPLACED

This product is out of stock. A retrospective of the 20 years of independence experienced by the countries of the South Caucasus clearly demonstrates the difficulties involved in building a state and restoring an economy after more than 70 years of Soviet rule. Each one of the three post-Soviet... END_OF_DOCUMENT_TOKEN_TO_BE_REPLACED