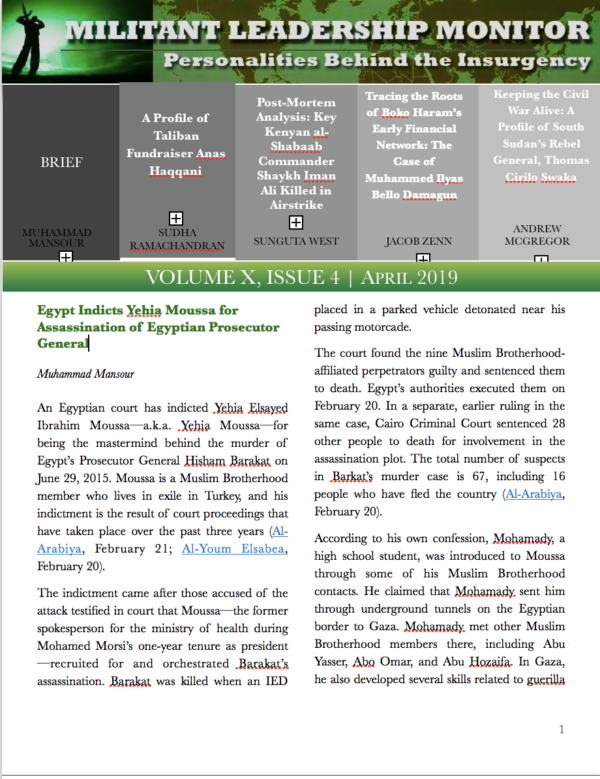 The April 2019 issue of Militant Leadership Monitor features a brief on Yehia Moussa, the Muslim Brotherhood member in exile Turkey who has recently been indicted by the Egyptian government for his alleged role in the 2015 assassination of the prosecutor general; a profile of Taliban Fundraiser and scion of the Haqqqani family, Anas Haqqani; a post-mortem analysis of Kenyan al-Shabaab commander Shaykh Iman Ali; an analysis of an inadvertent funder of the early Boko Haram, Muhammed Ilyas Bello Damagun; and a profile of Thomas Cirilo Swaka, the rebel general in South Sudan keeping that country’s civil war alive.

The Jamestown Foundation is proud to present a webinar on China’s... END_OF_DOCUMENT_TOKEN_TO_BE_REPLACED

On May 19, Voice of America posted an interview with Dr. Richard Arnold on the topic of Russian Cossacks’ involvement in the war against Ukraine. END_OF_DOCUMENT_TOKEN_TO_BE_REPLACED

The February 2020 issue features a brief on Mullah Nangialai, an influential leader of a Taliban splinter group in Herat who was recently killed in an airstrike; a look at Abu Hajar al-Hashemi, the “Governor” of Islamic State’s Sinai province; a comparison of 2 men who ran Islamic State... END_OF_DOCUMENT_TOKEN_TO_BE_REPLACED