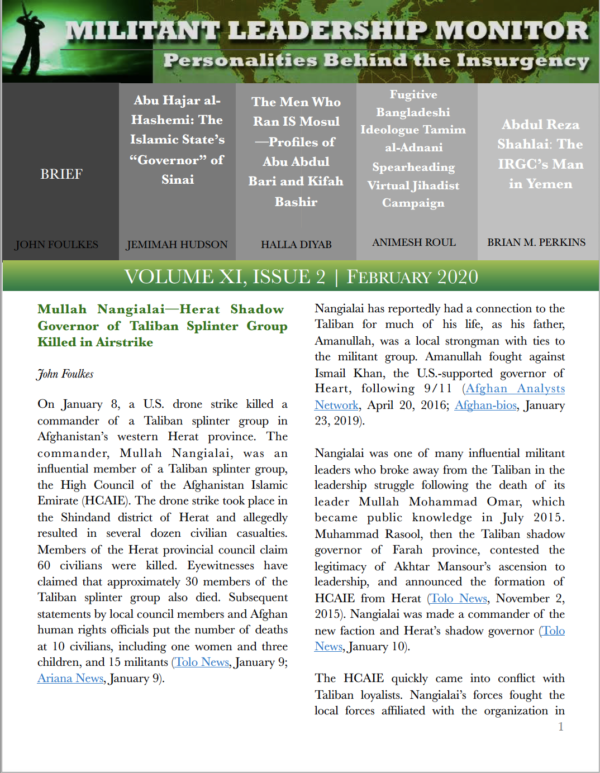 The February 2020 issue features a brief on Mullah Nangialai, an influential leader of a Taliban splinter group in Herat who was recently killed in an airstrike; a look at Abu Hajar al-Hashemi, the “Governor” of Islamic State’s Sinai province; a comparison of 2 men who ran Islamic State Mosul, Abu Abdul Bari and Kifah Bashir Hussein; an analysis of the Bangladeshi ideologue Tamim al-Adnani; and an in-depth portrait of Abdul Reza Shahlai, the IRGC’s man in Yemen.

Jamestown Non-Resident Fellow Matthew Brazil was quoted by Newsweek in a recent article, “Chinese Spies Pose Unprecedented Threat to US Beyond Elections to Mass Infiltration... END_OF_DOCUMENT_TOKEN_TO_BE_REPLACED

The May 2015 issue of Militant Leadership Monitor begins with a brief on trans-Saharan jihadist Adnan Abu Walid al-Sahrawi, who recently switched allegiance from al-Qaeda to the Islamic State, by Nicholas Heras. He follows with another on Abu Humam, who leads one of the local jihadist groups to defend the al-Yarmouk Palestinian... END_OF_DOCUMENT_TOKEN_TO_BE_REPLACED