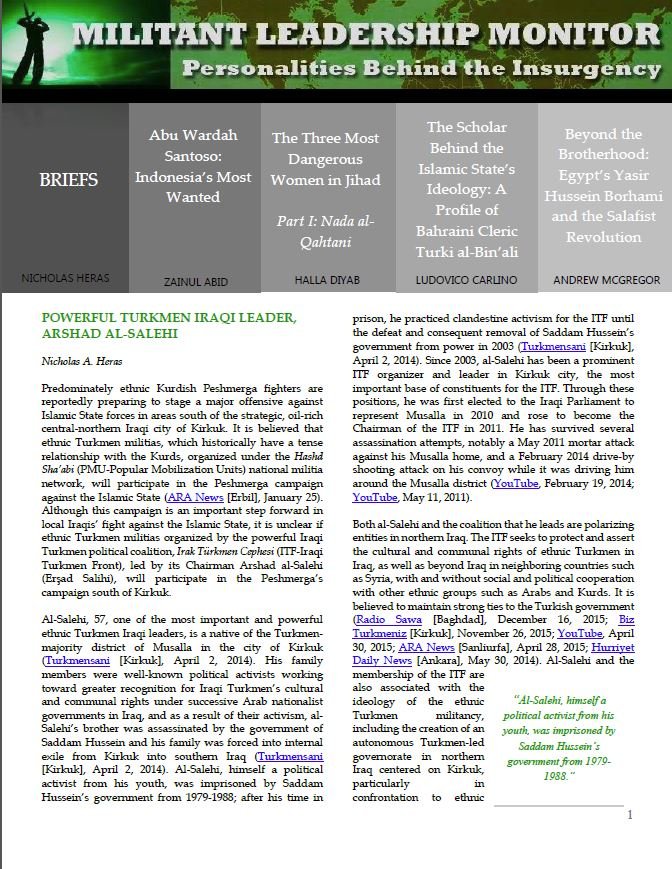 The January 2016 issue of Militant Leadership Monitor begins with briefs about Turkmen Iraqi leader, Arshad al-Salehi, and a Libyan military commander by the name of Salam Jadallah al-Ubaidi. The first profile in the issue describes the significance of Abu Wardah Santoso in the uptick of Islamic State violence in Southeast Asia. The next article is the first part of a three-part series on the most dangerous women in jihad, first detailing the life of Nada al-Qahtani, a Saudi source of influence in the Islamic State’s ranks. Finally, the issue closes with a profile of Bahraini cleric, Turki al-Bin’ali.

This issue of Militant Leadership Monitor includes profiles of Pakistan's Most Wanted Adnan Rasheed, Laskhar-e-Jhangvi founder Malik Muhammad Ishaq, Lashkar-e-Taiba's Abdul Rahman Makki, and al-Shabaab's Abu Mansoor al-Amriki.
$20.00 – $25.00 Select options
In this Special Report on the Libya Elections we examine the entrance of militant leaders into the political scene as the country recovers from several decades of Gaddafi's rule. This 2012 Quarterly Special Report features five articles and a timeline commissioned by The Jamestown Foundation.... MORE
$20.00 – $25.00 Select options
The October Issue of Militant Leadership Monitor features two briefs by Nicholas A. Heras. The first focuses on Ugandan militant Salafist leader Jamil Mukuli who has been accused of complicity in the attack on Westgate shopping mall in Nairobi, Kenya. The second brief concerns Shaykh... MORE
$20.00 – $25.00 Select options
The September Issue of Militant Leadership Monitor focuses on militant leaders in Africa and the Middle East. In the first brief, Nicholas A. Heras analyzes an Iraqi Shiite militia leader who has vowed vengeance if the United States and its Allies launch a strike on Syria. The... MORE
$20.00 – $25.00 Select options

The Jamestown Foundation is pleased to present a webinar on... END_OF_DOCUMENT_TOKEN_TO_BE_REPLACED

On November 17, Jamestown Foundation Senior Fellow Olevs Nikers was interviewed by Romania-based outlet Veridica regarding, among other topics, the best possible outcome for the... END_OF_DOCUMENT_TOKEN_TO_BE_REPLACED

On April 15, The Jamestown Foundation held a conference on Yemen on the Brink: Implications for U.S. Security Interests in the Horn of Africa at the Carnegie Endowment for International Peace in Washington, DC. The full-length DVD covers the entire conference proceedings, which includes keynote speakers: Ambassador Daniel Benjamin,... END_OF_DOCUMENT_TOKEN_TO_BE_REPLACED