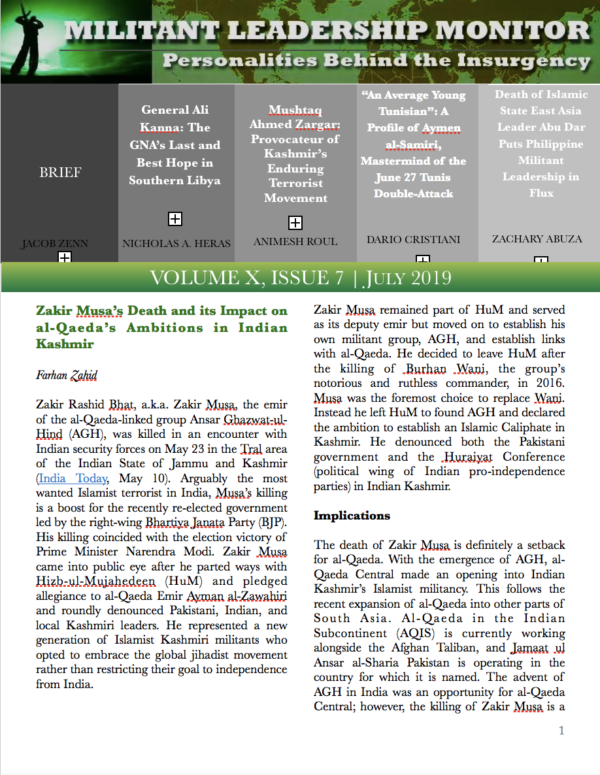 The July 2019 Issue of Militant Leadership Monitor features a brief on how the death of Zakir Musa will impact al-Qaeda in Indian Kashmir; a analysis of the effect General Ali Kanna’s appointment as commander of the GNA forces in the strategic southern Libyan province of Fezzan will affect the Tripoli government’s fight against Field Marshal Haftar; a profile of Mushtaq Ahmed Zargar, the long-running provocateur of terrorism in Kashmir; an in-depth examination of the “average Tunisian” Aymen al-Samiri, the mastermind of the June 27 terrorist attacks in Tunis; and a look into the leadership vacuum that has emerged in Philippine’s militant leadership following the death of Islamic State East Asia Leader Abu Dar.

In this month's issue of Militant Leadership Monitor, Jamestown analysts have written about militant and criminal underworld figures across the globe. In light of the rising tension between Lebanese Sunnis and Shiites that is being expressed in Syria, Murad Batal al-Shishani drew up a portrait... MORE
$20.00 – $25.00 Select options
The December Issue of Militant Leadership Monitor features two briefs by Nicholas A. Heras. The first focuses on the recent announcement by eastern Syrian militant leader Saddam al-Jamal of his change of allegiance from the Free Syrian Army to al-Qaeda. The second brief provides a snapshot of Osama Amin al-Shihabi... MORE
$20.00 – $25.00 Select options
The September Issue of Militant Leadership Monitor focuses on militant leaders in Africa and the Middle East. In the first brief, Nicholas A. Heras analyzes an Iraqi Shiite militia leader who has vowed vengeance if the United States and its Allies launch a strike on Syria. The... MORE
$20.00 – $25.00 Select options
In the June issue of MLM Nicholas A. Heras provides two briefs, one concerning a leadership dispute within the Syrian-back Abu al-Fadhal al-Abbas Brigade to Defend the Holy Shrine of Sayida Zeinab and a second brief about a ceasefire negotiated between MNLA leader Bilal ag... MORE
$20.00 – $25.00 Select options