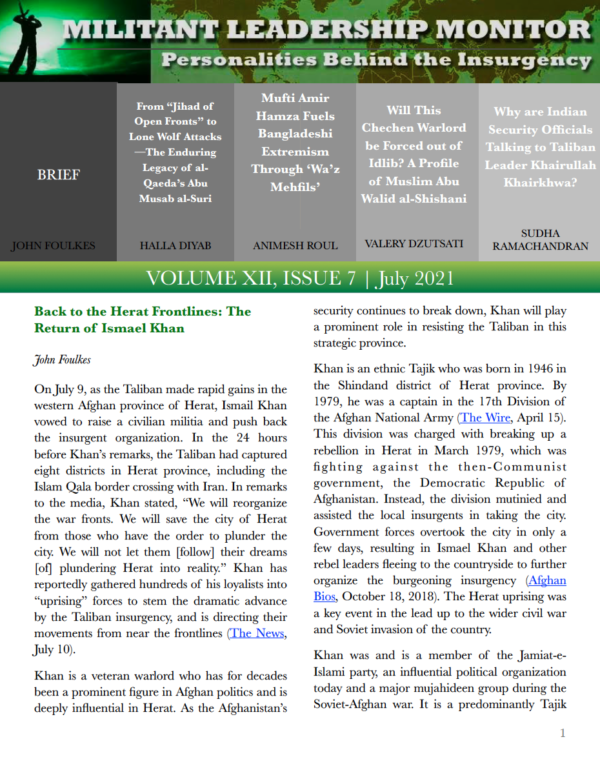 the July 2021 issue of Militant Leadership Monitor features a brief on the Herat warlord Ismael Khan, who has returned to the frontlines to fight the Taliban; an examination of infamous al-Qaeda ideological theoretician Abu Musab al-Suri’s role in promoting lone wolf attacks; a look at the recently arrested Mufti Amir Hamza, who is at the forefront of radicalizing Bangladeshi youth; an analysis of Muslim Abu Walid al-Shishani, the Chechen warlord at odds with HTS in Idlib; and an in-depth look at Khairullah Khairkhwa, the Taliban leader who recently spoke with high-level Indian officials.

In this Quarterly Special Report (QSR) on the rise of al-Shabaab, we focus on the various militants who are guiding al-Shabaab, an al-Qaeda-aligned militant organization that aims to impose Shari’a in Somalia. The group began as a radical youth wing of Somalia’s Islamic Courts Union... MORE
$20.00 – $25.00 Select options
In this Quarterly Special Report (QSR) on Mayhem in Mali, we focus on the various Islamist fighters who have taken over northern Mali. The QSR includes profiles of important personalities in the Sahel region such as Abou Zeid, a brutal, committed and resilient militant under... MORE
$20.00 – $25.00 Select options
This issue of Militant Leadership Monitor includes in-depth portraits of Tripoli's Hussam Abdullah Sabbagh, Hamas Political Bureau Chief Khalid Meshaal, Egypt's Muhammad al-Zawahiri and the Toulouse gunman Muhammad Merah.
$20.00 – $25.00 Select options
In this Special Report “Pakistan’s Tribal Militants: Profiles from the Pashtun and Baloch Insurgencies,” we examine some of Pakistan’s tribal militant leaders in the Federally Administered Tribal Areas (FATA) and the North West Frontier Province (NWFP) as well as the tribal insurgency in Pakistan’s south,... MORE
$20.00 – $25.00 Select options

The Jamestown Foundation is proud to present a webinar on “Broken... END_OF_DOCUMENT_TOKEN_TO_BE_REPLACED

On January 27, The New York Times published an article concerning Russia’s military modernization and its impact on the Ukraine crisis. In the article, Jamestown Board... END_OF_DOCUMENT_TOKEN_TO_BE_REPLACED

The “Baltic Interoperability Report” is the first publication of the Baltic Security Strategy Project (BSSP), the largest independent security study in Estonia, Latvia and Lithuania. For these three countries, which are challenged by variations in regional stability and security over the years, enhanced military interoperability has been and still... END_OF_DOCUMENT_TOKEN_TO_BE_REPLACED