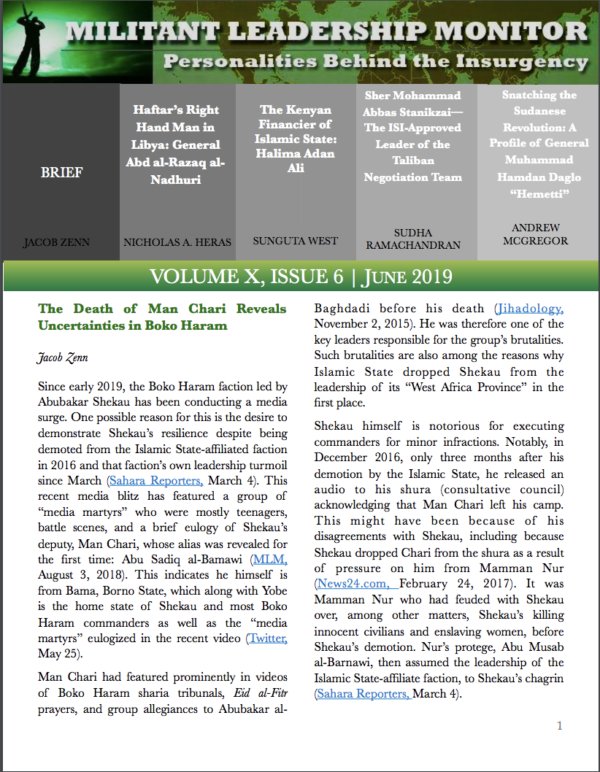 The June 2019 issue of Militant Leadership Monitor features a brief on the death of the deputy leader of Boko Haram, Man Chari; an analysis of Libyan National Army chief of staff and right-hand man to General Haftar, General Abd al-Razaq al-Nadhuri; a look into the Kenyan financier of Islamic State, Halima Adan Ali; a profile of the Taliban’s head negotiator Sher Mohammad Abbas Stanikzai; and an in-depth examination of General Muhammad Hamdan Daglo “Hemetti,” the head of the feared Rapid Support Forces of Sudan.

The September Issue of Militant Leadership Monitor focuses on militant leaders in Africa and the Middle East. In the first brief, Nicholas A. Heras analyzes an Iraqi Shiite militia leader who has vowed vengeance if the United States and its Allies launch a strike on Syria. The... MORE
$20.00 – $25.00 Select options
In this Quarterly Special Report (QSR) on the conflict in South Sudan, we focus on the civil wars, border disputes and rivalries between ethnic groups that have resulted in over half a century of violence in the country. The QSR begins with an overview by... MORE
$20.00 – $25.00 Select options
This issue of Militant Leadership Monitor includes in-depth analyses of Ansaru's Khalid al-Barnawi, the Niger Delta's al-Haji Mujahid Dokubu-Asari, succession scenarios after Talabani, and the second part of a who's who in the Jordanian Opposition.
$20.00 – $25.00 Select options
The November Issue of Militant Leadership Monitor features two briefs by Nicholas A. Heras. The first focuses on the recent announcement of the formation of al-Jabhat al-Islamiya (Islamic Front), a coalition of seven powerful opposition groups in Syria, with a look at one of its... MORE
$20.00 – $25.00 Select options

The Jamestown Foundation is proud to present a private Zoom webinar... END_OF_DOCUMENT_TOKEN_TO_BE_REPLACED

One year after the capture of Mosul on June 9, 2014, the militant movement known as the Islamic State has become one of the world’s most widely known terrorist organizations. The rise of this jihadist group has set off shock waves in Western capitals as the militant movement declared... END_OF_DOCUMENT_TOKEN_TO_BE_REPLACED