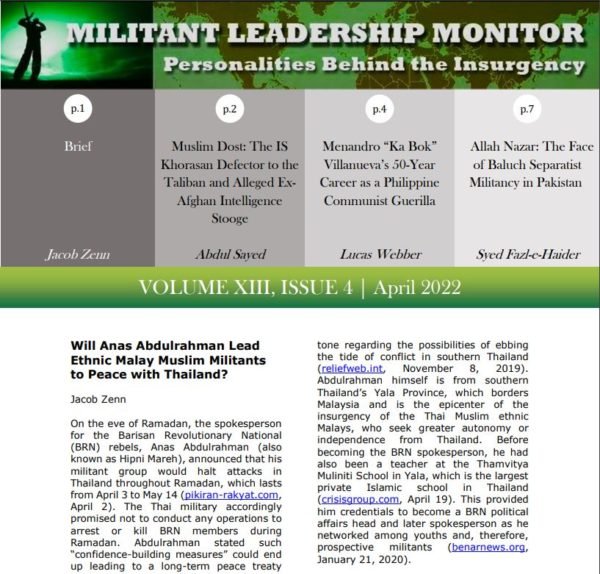 The June 2022 issue of Militant Leadership Monitor is a special issue of MLM that examines militants fighting in the Russo-Ukraine War. It starts off with a piece on Vladimir Andonov Batobolotovich, also known as “Vakha,” a notorious Wagner Group mercenary recently killed in Ukraine. It also features profiles on three other militants on both sides of the conflict: Muslim Cheberloyevsky, Denys Prokopenko, and Kuudaabek uulu Almaz. Each of these men are prominent faces in the conflict right now. Muslim Cheberloyevsky is the head of the Sheikh Mansur Battalion. Prokopenko is the recently captured head of the Azov Regiment. And Kuudaabek uulu Almaz is the first kyrgyz fighter in Ukraine to be criminally charged by his home government.

The horrible tragedy in Boston on April 15 has refocused Western attention on Russia’s troubled North Caucasus, which has already experienced more than a decade of turmoil and upheaval. Many perspectives exist in scrutinizing the deadly events surrounding the Boston Marathon terrorist attacks. But nearly... MORE
$20.00 – $25.00 Select options
The August Issue of Militant Leadership Monitor is a special issue. The report begins with two briefs by Nicholas A. Heras on Bin Laden aide Ramzi Mahmud al-Muwafi and Syrian YPG Commander Sipan Hemo, respectively. The following two profiles come from Eurasia Daily Monitor regular... MORE
$20.00 – $25.00 Select options
In this “Special Report on The Syrian Uprising: A Focus on Parties and Leadership” we examine the roles of key religious, military, and political actors in the Syrian uprising. This 2012 Quarterly Special Report features five brand-new articles commissioned by The Jamestown Foundation and one highly... MORE
$20.00 Select options
In this “Special Report on Boko Haram: Nigeria’s Islamist Movement” we examine the rise of Boko Haram’s elusive leader Abu Shekau, and the policies of the group’s charismatic leader – Mohammed Yusuf – the former leader whose death in 2009 led to Abu Shekau’s rise... MORE
$20.00 – $25.00 Select options

The Jamestown Foundation was proud to host a webinar on... END_OF_DOCUMENT_TOKEN_TO_BE_REPLACED

Jamestown Foundation Analyst Richard Arnold was interviewed by PolitiFact for a story on the Lie of the Year 2022, or Putin’s long list of lies... END_OF_DOCUMENT_TOKEN_TO_BE_REPLACED

The September Issue of Militant Leadership Monitor focuses on militant leaders in Africa and the Middle East. In the first brief, Nicholas A. Heras analyzes an Iraqi Shiite militia leader who has vowed vengeance if the United States and its Allies launch a strike on Syria. The second brief looks at... END_OF_DOCUMENT_TOKEN_TO_BE_REPLACED