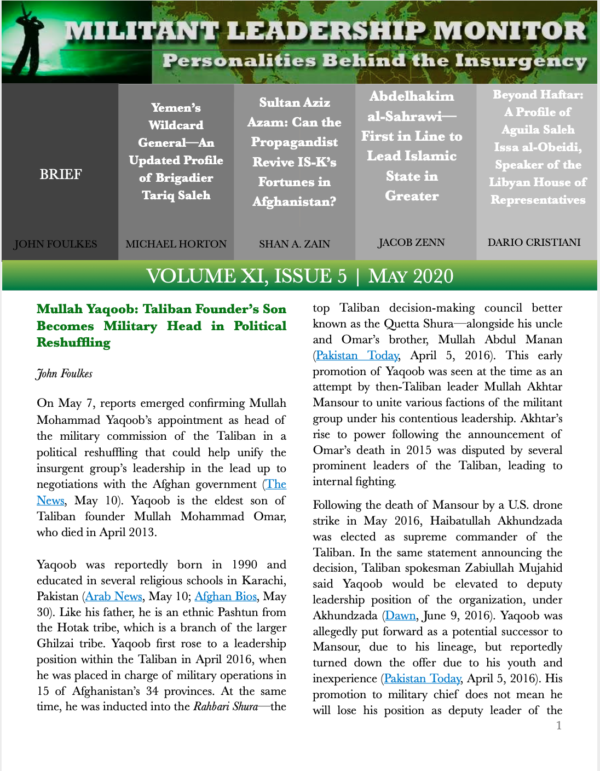 The May 2020 issue of Militant Leadership Monitor features a brief on Mullah Yaqoob, the son of the Taliban founder who was recently promoted to the position of military chief of the Afghan militant group; an update of Tariq Saleh, Yemen’s wildcard general; a look at Sultan Aziz Azam, Islamic State – Khorasan’s spokesman and propaganda leader; an in-depth profile of Abdelhakim al-Sahrawi, a leader of Islamic State in Greater Sahara who is next in line to leadership of the affiliate; and an analysis of Aguila Saleh Issa al-Obeidi, speaker of the Tobruk-based Libyan House of Representatives.

On August 4, the Jamestown Foundation held a webinar  on... END_OF_DOCUMENT_TOKEN_TO_BE_REPLACED

Jamestown Senior Fellow Margarita Assenova was featured in an event with the New Lines Institute for Strategy and Policy on Capitol Hill. The event was... END_OF_DOCUMENT_TOKEN_TO_BE_REPLACED

In this “Special Report on The Syrian Uprising: A Focus on Parties and Leadership” we examine the roles of key religious, military, and political actors in the Syrian uprising. This 2012 Quarterly Special Report features five brand-new articles commissioned by The Jamestown Foundation and one highly relevant article from The... END_OF_DOCUMENT_TOKEN_TO_BE_REPLACED