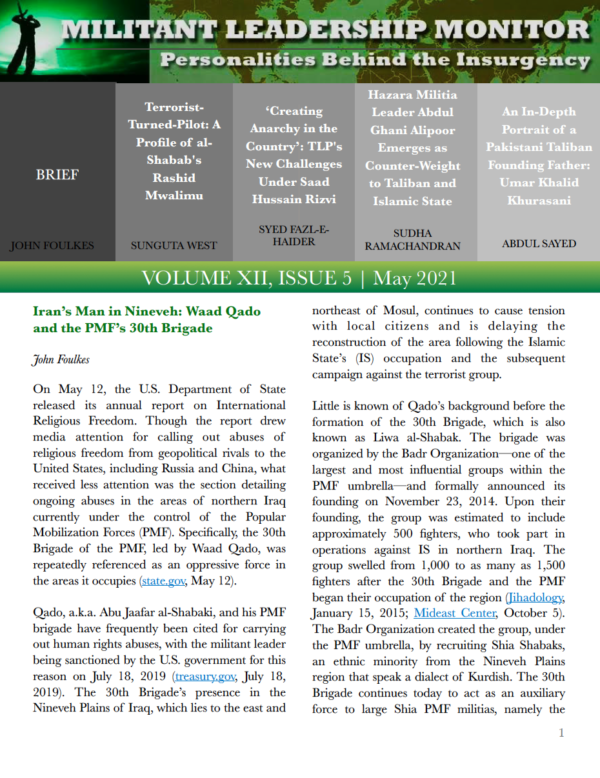 The May 2021 issue of Militant Leadership Monitor features a brief on Waad Qado, the leader of the Iranian-backed Popular Mobilization Force’s 30th Brigade that is currently on the frontlines of geopolitical tensions in the region; a look at Rashid Mwalimu, an al-Shabaab fighter trained to be a pilot to conduct terrorist attacks and who is now on the run from Kenyan and Somali security forces; a profile of Saad Hussain Rizvi, the Islamist extremist leader of the Tehreek-e-Labbaik Pakistan party whose protests recently shut down the country’s major cities; an analysis of Abdul Ghani Alipoor, an Afghan militia leader considered to be the “Guardian” of Hazaras in the country; and an in-depth portrait of one of the Pakistani Taliban’s founding fathers, Umar Khalid Khurasani.

In this month's issue of Militant Leadership Monitor, Jamestown analysts have written about militant and criminal underworld figures across the globe. In light of the rising tension between Lebanese Sunnis and Shiites that is being expressed in Syria, Murad Batal al-Shishani drew up a portrait... MORE
$20.00 – $25.00 Select options
In this Special Report on the Libya Elections we examine the entrance of militant leaders into the political scene as the country recovers from several decades of Gaddafi's rule. This 2012 Quarterly Special Report features five articles and a timeline commissioned by The Jamestown Foundation.... MORE
$20.00 – $25.00 Select options
The December Issue of Militant Leadership Monitor features two briefs by Nicholas A. Heras. The first focuses on the recent announcement by eastern Syrian militant leader Saddam al-Jamal of his change of allegiance from the Free Syrian Army to al-Qaeda. The second brief provides a snapshot of Osama Amin al-Shihabi... MORE
$20.00 – $25.00 Select options
In this “Special Report on The Syrian Uprising: A Focus on Parties and Leadership” we examine the roles of key religious, military, and political actors in the Syrian uprising. This 2012 Quarterly Special Report features five brand-new articles commissioned by The Jamestown Foundation and one highly... MORE
$20.00 Select options