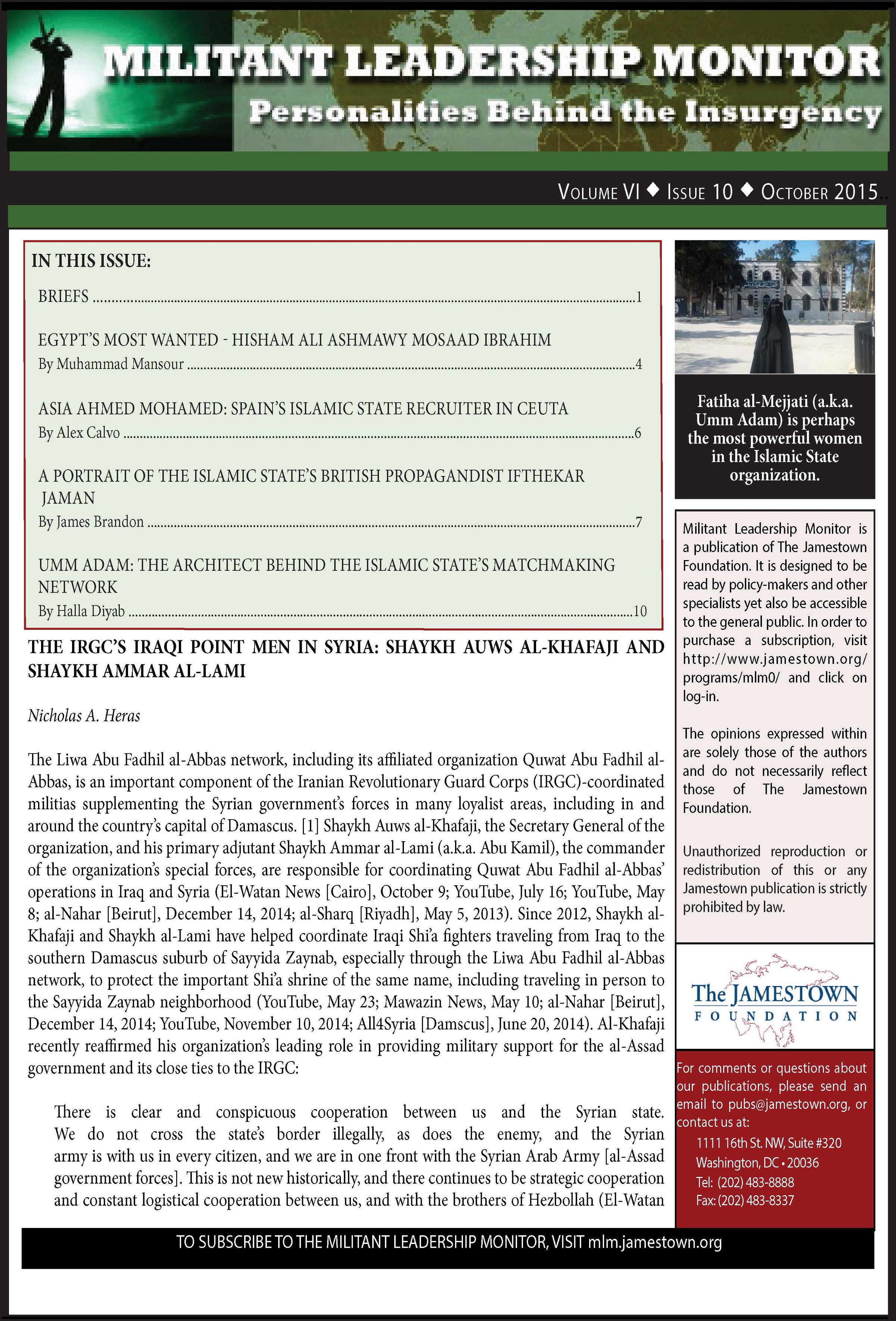 The October 2015 issue of Militant Leadership Monitor covers several militants connected with the ongoing conflict in Syria and Iraq. Nicholas Heras begins with a brief on Shaykh Auws al-Khafaji and Shaykh Ammar al-Lami, the Secretary General and primary adjutant, respectively, of an Iraqi Shi’a group that fights on behalf of the Syrian regime. Muhammad Mansour then details Hisham Ali Ashmawy Mosaad Ibrahim, an Egyptian al-Qaeda militant who formed his own organization rather than swear allegiance to the Islamic State. Asia Ahmed Mohamed is one of several Spanish women who have gone to join the Islamic State in Syria according to Alex Calvo. James Brandon gives a glimpse into one of the first English-language propagandists in the Islamic State, Ifthekar Jaman, and how he continues to inspire others to go abroad to fight despite his death two years ago. Finally, Umm Adam, perhaps the most powerful woman in the Islamic State, is profiled by Halla Diyab.

In the June issue of MLM Nicholas A. Heras provides two briefs, one concerning a leadership dispute within the Syrian-back Abu al-Fadhal al-Abbas Brigade to Defend the Holy Shrine of Sayida Zeinab and a second brief about a ceasefire negotiated between MNLA leader Bilal ag... MORE
$20.00 – $25.00 Select options
The November Issue of Militant Leadership Monitor features two briefs by Nicholas A. Heras. The first focuses on the recent announcement of the formation of al-Jabhat al-Islamiya (Islamic Front), a coalition of seven powerful opposition groups in Syria, with a look at one of its... MORE
$20.00 – $25.00 Select options
In this “Special Report on The Syrian Uprising: A Focus on Parties and Leadership” we examine the roles of key religious, military, and political actors in the Syrian uprising. This 2012 Quarterly Special Report features five brand-new articles commissioned by The Jamestown Foundation and one highly... MORE
$20.00 Select options
This issue of Militant Leadership Monitor includes profiles of Saudi Arabia's Ahmed Abdullah Saleh al-Khazmari al-Zahrani, AQIM's Jemal Oukacha, Libya's Isa Amd al-Majid, the Niger Delta's al-Haji Mujahid Dokubo-Asari (Part Two), and a look at leaders of Ansar al-Sharia in Tunisia.
$20.00 – $25.00 Select options

The Jamestown Foundation was proud to host a conference on... END_OF_DOCUMENT_TOKEN_TO_BE_REPLACED

On June 6, Jamestown’s President Glen E. Howard was quoted by Task and Purpose in an article on Russia’s Chechen fighters in Ukraine. END_OF_DOCUMENT_TOKEN_TO_BE_REPLACED

On December 8, 2015, The Jamestown Foundation held its ninth annual terrorism conference on The War in Syria, Islamic State and the Changing Landscape of Asymmetric Threats, at the University Club in Washington, DC. This full-length set of DVDs covers opening remarks, three conference panels and a keynote closing address... END_OF_DOCUMENT_TOKEN_TO_BE_REPLACED